November 07, 2018
Hi everyone!  I'm excited to share my final post on my trip to the Big Island, which included one of the top experiences of my life.  When Dan and I were trying to decide what island to visit, we knew that we had to go to the Big Island while the volcano was erupting.  Not only was this a once in a lifetime thing to see, but the economy was also really hurting due to visitors cancelling their trips (even though the volcano only affected a very small part of a BIG island..as the name suggests!).

We decided to splurge and take a helicopter ride in order to really see and experience the powerful volcano.  I also saw recommendations to go on a boat tour, where you can get really close to where the lava enters the ocean, but I also wanted to see other areas of the island (especially waterfalls)!  So, we purchased the Big Island Spectacular through Blue Hawaiian Helicopters. 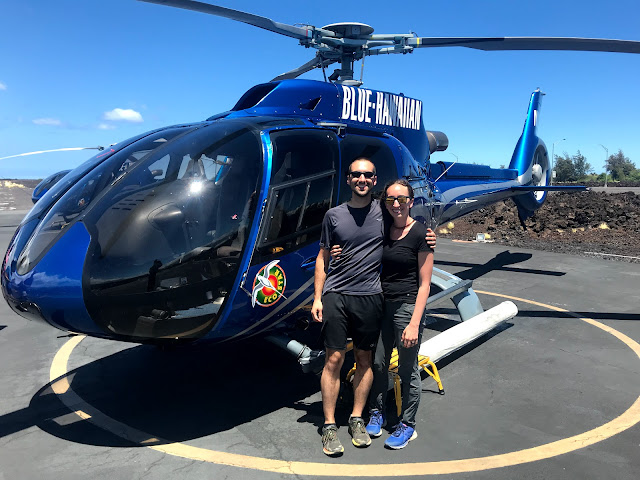 Before the tour started, we made our way to breakfast near the heliport (the other helicopter companies operate out of the two island airports, but Blue Hawaiian actually has their own private heliport right by Waikoloa Village!)  We went to Daylight Mind, where I had the most delicious macadamia nut milk latte and their specialty Niu Pancakes (with coconut and haupia syrup). 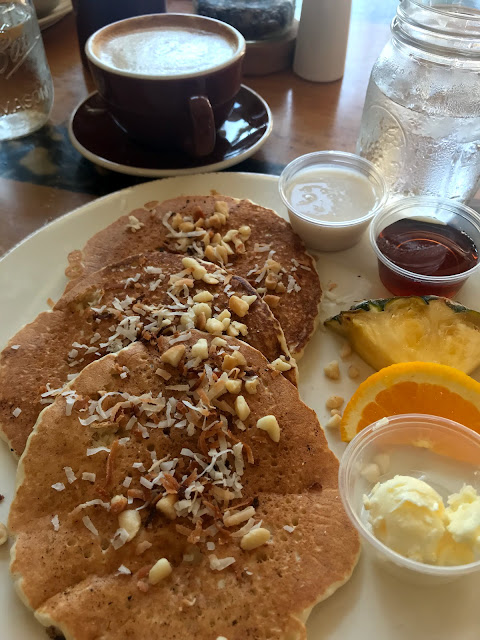 Then, we made our way over to the heliport to get checked in and watch safety videos.  We got to meet our pilot, Marco, and the other 4 people on our helicopter.  I was lucky and got a window seat and a great view!  (Pro tip- make sure to wear dark clothes if you're on a helicopter!  Otherwise, you'll see your reflection in the windows.) 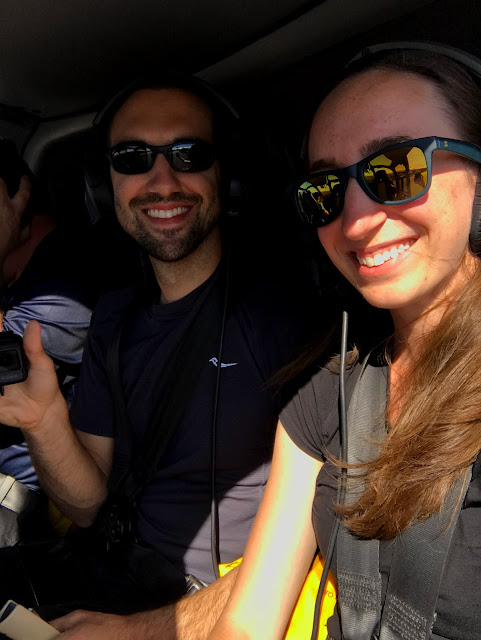 Soon, we were taking off to the soundtrack of James Bond and were souring above the island!  We started on the west coast of the Big Island and flew over Kona.  In the Hawaiian language, Kona means leeward, or dry side of the island.  In ancient Hawaii, each island had a district called Kona!  You might also recognize the name because this is a very famous coffee region, with some of the most expensive beans in the world.  This region has an ideal climate and mineral-rich volcanic soil, which comes together to create great coffee growing conditions! 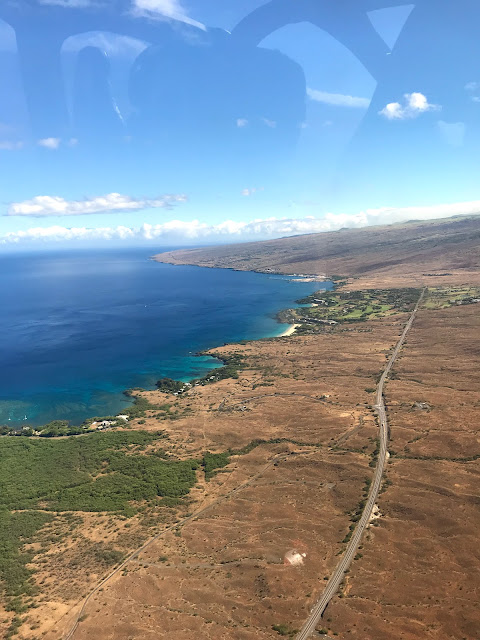 After going up the coast for a bit and seeing a lot of dry land and old volcanic flows, we made our way to the Kohala Coast, where we were treated to the incredible view of the Waipi'o Valley.  This is actually where Dan and I hiked a few days earlier, so it was great to see the same sights from the air! 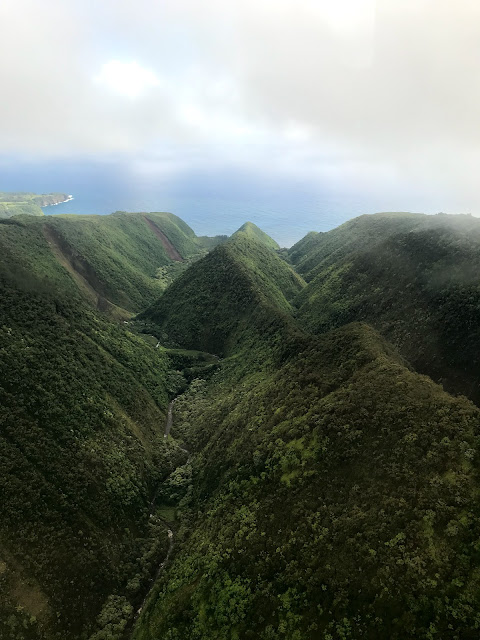 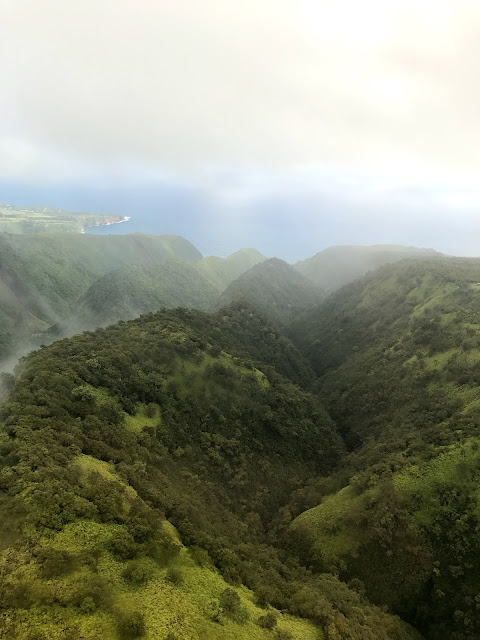 How amazing are these views!  You can also spot lots of waterfalls all over the coast line, tumbling down the ridges. 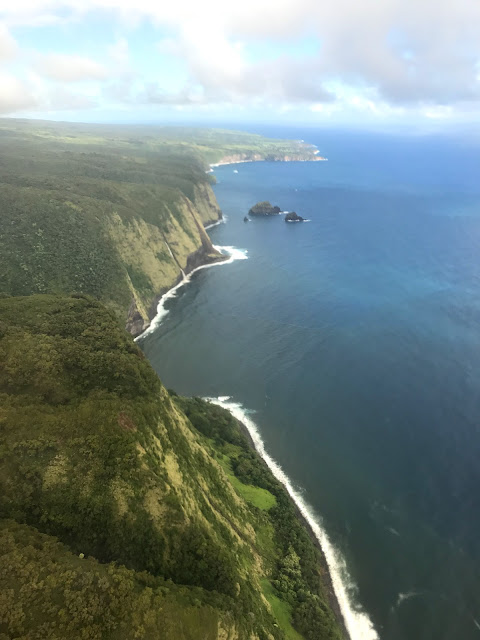 We also got to see the Big Island's tallest waterfall- Hi'ilawe Falls.  As you can tell, these falls are only able to be seen from the air, and are 1,450 feet tall!  Since it was raining a lot recently, there were also a number of other waterfalls that Marco said aren't usually flowing in that area.  It was really magnificent! 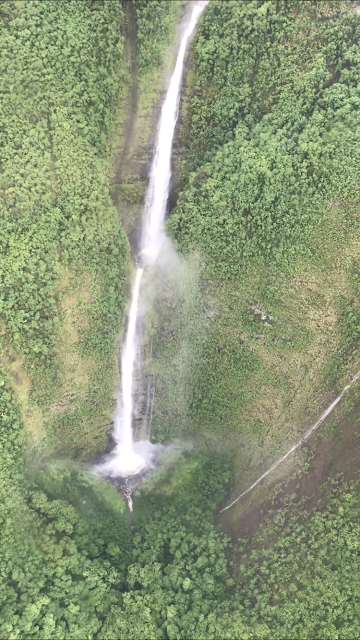 After we circled around the waterfalls and valley a bit more, we started our journey over to the active volcano in Volcanoes National Park and went by Hilo.  Like I mentioned, Dan and I picked the Big Island because of the opportunity to see flowing lava.  While it definitely was an incredible, awe-inspiring sight, it was also sobering to see the devastation that it caused.  The flow of lava takes out everything in its path- houses, farms, buildings, cars, and more.  At the same time- the islands are all formed by volcanoes, so the Big Island is actually expanding. 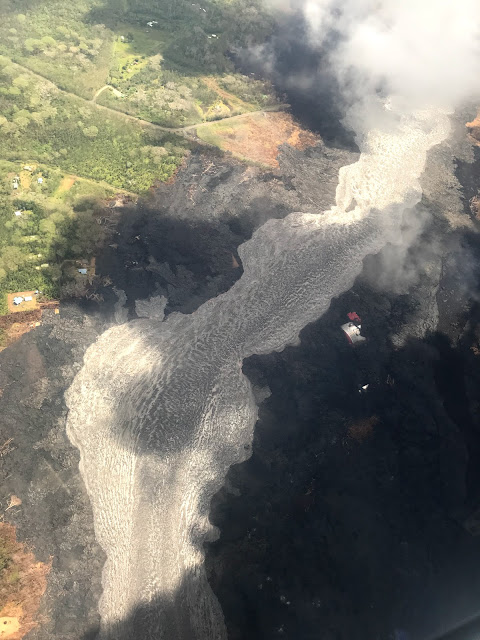 Just seeing the volcano constantly erupting moments after seeing hundreds of waterfalls on the opposite coast really put into perspective how powerful Mother Nature is, and how inconsequential we all are.  As you can probably tell, this was really a moving and emotional experience for me! 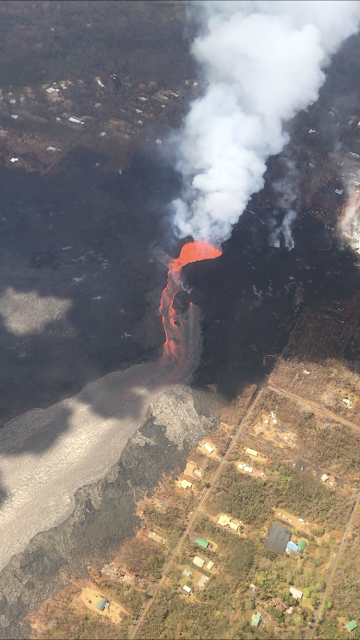 After making a quick stop at the Hilo Airport to refuel, we made our way back to the heliport, cutting through the middle of the island.  After seeing the volcano in person, it was hard to take anything else in!  I was happy that we ended our trip here, because it would have been impossible for anything else to top this experience.

Have you ever been on a helicopter?
What's the most amazing thing you've seen in person?
hawaii