January 21, 2019
Happy Martin Luther King, Jr Day to everyone!  I'm lucky enough to have the day off (which has been awesome- been doing a lot of house cleaning and decluttering all weekend).  While the temperature has definitely been dropping in the past few days, my training is starting to heat up.

My officially training plan for my next half marathon starts in just a few weeks, so I'm working on building up a solid base!  Besides some cross training and running, I also am doing the Yoga with Adriene 30 Days of Yoga (as I mentioned in my monthly goals), as well as 15 squats, 10 pushups, and 15 situps each morning.  This is a little challenge my friends and I started, and I think it's a great way to start the day!

Here's how my week of workouts went:

Day 13 - Space
Lots of twists in this one, which is one of my favorite moves in yoga!  Really nice and relaxing.

2.25 miles / 9:21 pace
I wasn't really in the mood to run, but when I got home from work I just changed into running clothes and got out before I could think about it too much.  I did an easy run around my block and was happy that I made it out!

Day 14 - Grace
This was a tough one! Adriene seems to either have relaxing, meditative style classes or intense, "let's get strong" videos, and this was definitely the latter.

Beat Fitness
Even though I love this class (which I go to with my Class Pass membership) and I always get in a great workout, this was honestly not my favorite.  There were three stations with three moves each, and we were at each station for five sets of 2:30, and I just couldn't get into it for some reason.  It seemed like each round dragged on, and five sets seemed like infinity.  I pushed through it with help from Alexa being there, as well as the trainer Brian.

Day 15 - Reveal
A few moves that targeted the abs in this one, which were basically on fire after Beat! (one of the stations was all abs, so they were toast).

The Barre Code
Somehow Alexa convinced me to go to back-to-back classes, but luckily I felt pretty good, and the workout was focused on legs and arms instead of my (dead) abs!  This was a HIIT (high intensity interval training) class, which had sections of cardio broken into high intensity/short intervals, interspersed with AMRAP (as many rounds as possible)-style strength segments.  While I loved the strength, the cardio kept using the same movements for each section.  Time went by really quickly and I got a great workout, but I was craving new moves by the third round!

Day 16 - Dulce
Not a ton of movement, and it was all floor stretches.  Felt really great though.

4.5 miles / 9:43 pace
I got home from work a bit early, so I made it to the park for an easy run.  The normal route is 5 miles, but I took a little short cut to take off a half mile.  Still working on building up mileage, so I was just happy to finish this without walking!

Day 17 - Learn
So many great stretches in this one!  Definitely needed, because my legs were screaming at me from all of the squats in Wednesday's class followed by a run!

Day 18 - Love
I did this after my long run, so I had to modify some of the poses, and added in a few more stretches. 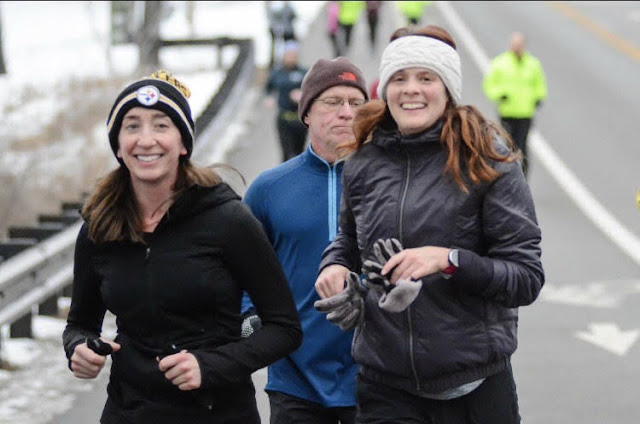 Pro Bike and Run just opened a new store in North Park, so I was excited to join the group for my long run.  It was amazing, because so many of my friends were there and the miles just flew by.  I was actually planning on only doing five miles, but ended up getting convinced by Jessie and Jess to do another three.  We picked up the pace a bit for the final mile and a half, and it felt great to be out there!
I also have to share this awesome group picture with some of my faster friends: 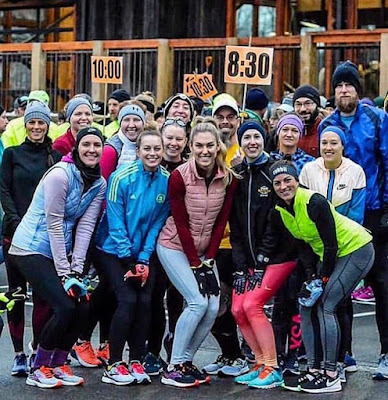 One of the benefits of group runs- awesome (free) pictures!  Us slower gals just decided to hop into all the faster group shots, but we ran with the 10:00 / "perfect 10" group.

Day 19- Listen
Relaxing practice, not a ton of movement but great stretches in lizard pose (one of my favorites). 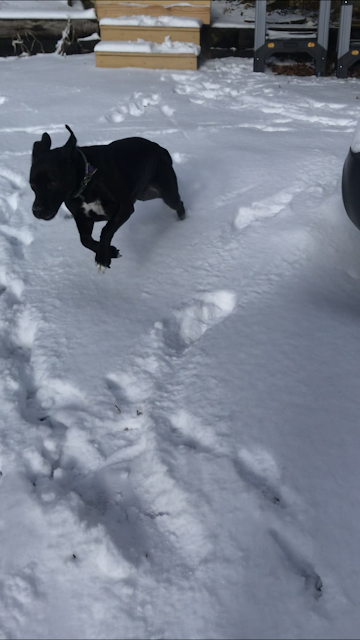 We got a ton of snow, so Selma and I went on a walk before the snow plow came or anyone drove on the roads.  It was amazing, and we followed it up with a little run around in the snow!  Just look at this happy girl!

Do you like running in the cold?
Favorite kind of cross training?
Cap City Half yoga