May 17, 2018
Hi everyone!  Sorry for a bit of radio silence on the blog the past few weeks, but if you've been following me on social media, you know that I was on a bit of a vacation!  Back in August, I found a great deal on Groupon for a trip to Scotland and Ireland- two places on my dream travel list.  I have to say that both places exceeded my very high expectations, and I'm excited to share my trip and some pictures!

Today I'll be talking about Scotland, which was the first stop on our trip.  We flew from JFK to Edinburgh, where we picked up a rental car and set off for a 300-year farmhouse-turned-Bed and Breakfast nestled in the Carron Valley between the two biggest cities in Scotland (Glasgow in the west and Edinburgh in the east).

From there, we were able to venture out for day trips and beautiful drives throughout the Highlands!  It's definitely a trip that I'll always remember.  Here are a few of my favorite places that we got to see-

Our first stop was to the capital of Scotland- Edinburgh.  The city feels very historic, and every time you turn a corner you're met with an old stone building or quaint alleyway.  We started out at the Edinburgh Castle, and made our way down the Royal Mile towards Arthur's Seat (which, sadly, we never got to hike, but it looks gorgeous!  Next time!!). 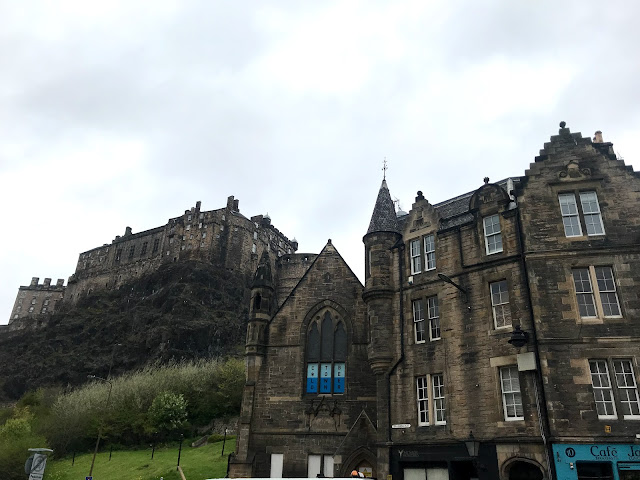 Along the way, we stopped at medieval armor shops, kilt factories, listened to bagpipers, popped into churches, and explored the various alleyways (or 'Close' as they call it).  We also got to see lots of Harry Potter shops, and the cafe where JK Rowlings apparently started writing the series!  One of my most beautiful streets in town (Victoria Street) is even said to have inspired Diagon Alley. 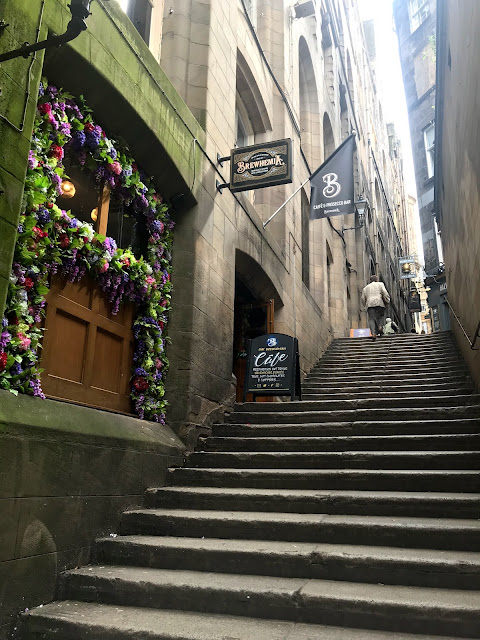 Our Bed and Breakfast was really close to the town of Stirling, so we had to make a stop there! Like pretty much every town in the country, this one has a castle.  There is a saying that "He who holds Stirling holds Scotland" because of its important location (the River Forth starts in Stirling and flows straight to the North Sea/Atlantic Ocean) and gateway to the Highlands.   We explored the area after completing a Park Run in the beautiful Callendar Park, and stopped by Church of the Holy Rude, the old jail, and castle. 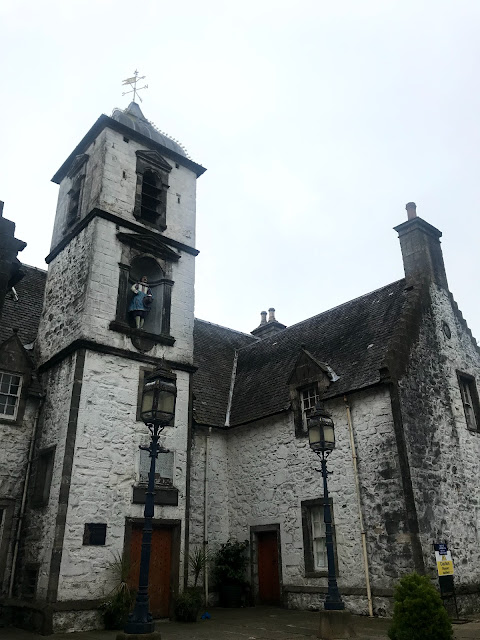 We went for a short hike up to an overlook with a beheading stone (!!!) and some cannons.  There was a beautiful view of the entire area, including the Wallace Monument.  I still haven't seen Braveheart, but I kept seeing monuments and statues for William Wallace, so it's on my queue. 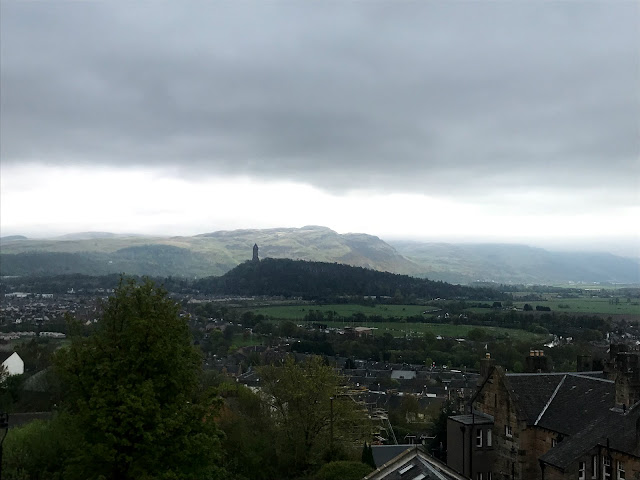 Next up was a drive to the eastern edge of Scotland, to the tiny University town of St. Andrews.  The town is famous for a few things- it is regarded as the "home of golf" and has one of the oldest golf courses in the world, and for the West Sands Beach.  If you've ever seen the famous running scene at the beginning of Chariots of Fire, that was filmed on West Sands Beach!  It was also featured in the 2012 Olympic Opening Ceremony...pretty cool. 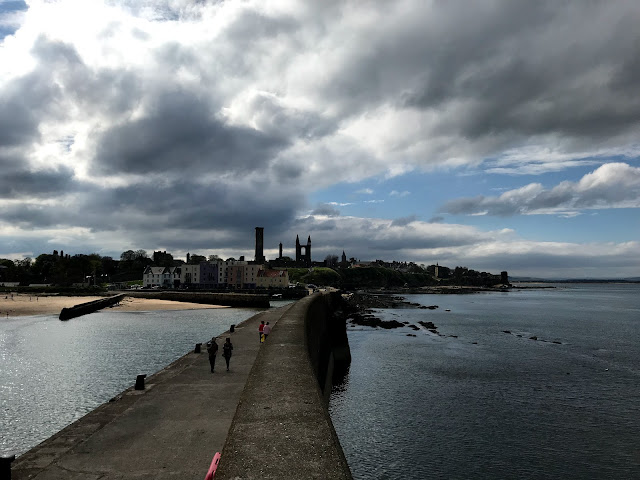 I really liked the town- even though it was really tiny, there were tons of shops and pubs.  There are also lots of pathways and other beaches to explore, castle and cathedral ruins, and the University grounds.  We also found a brewery (St. Andrews Brewing) that had some great drafts!  I had the Crail Ale and really enjoyed it with a vegetarian Buddah Bowl. 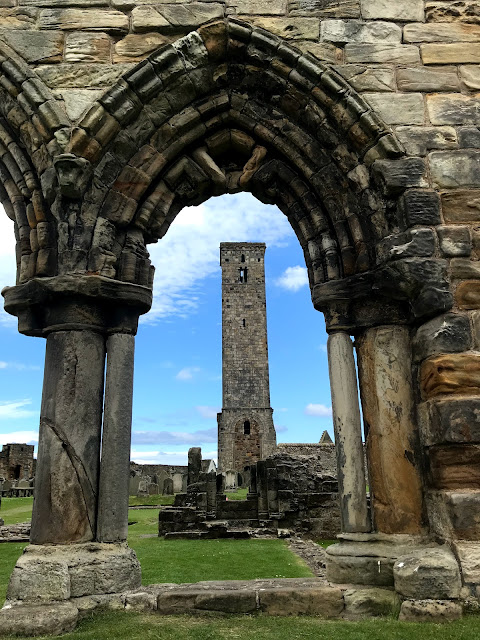 The next day, we set off for the West and a drive through the Highlands!  Our end destination was the town of Glencoe.  While I was researching the trip, I came across the most incredibly beautiful pictures of mountains and lakes (pretty much exactly what I pictured when I thought of Scotland), and knew we had to stop there.  The town is kind of famous as well, because it's been used for filming- Harry Potter (Hagrid's home!), Skyfall, and the opening credits of Outlander. 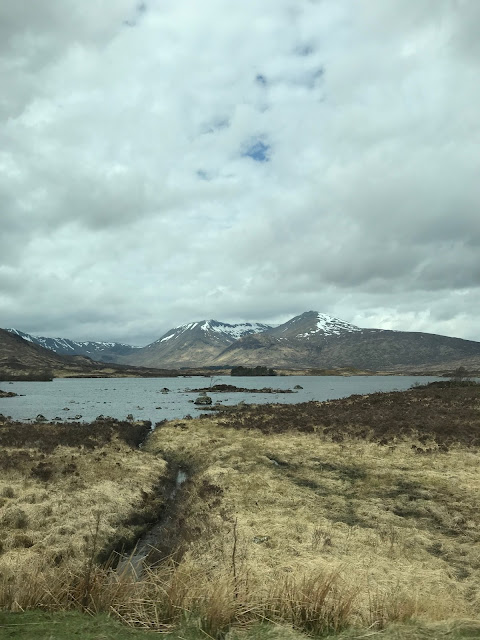 It definitely didn't disappoint, and the drive there was amazing as well!  We got to go through Loch Lomond and the Trossachs National Park, and kept pulling over to take in the views.  Once we got into town, we went on a hike through An Torr, up to Signal Rock.  We ended up taking a wrong tour and accidentally trespassed on someone's farm (whoops) but it was really fun and beautiful! 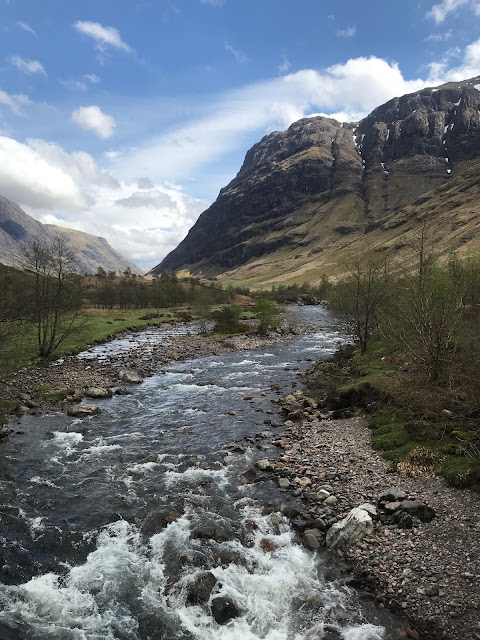 As we drove towards Glasgow, we made a few other stops- the Castle Stalker (we stopped at the nearby cafe for a quick pick-me-up) 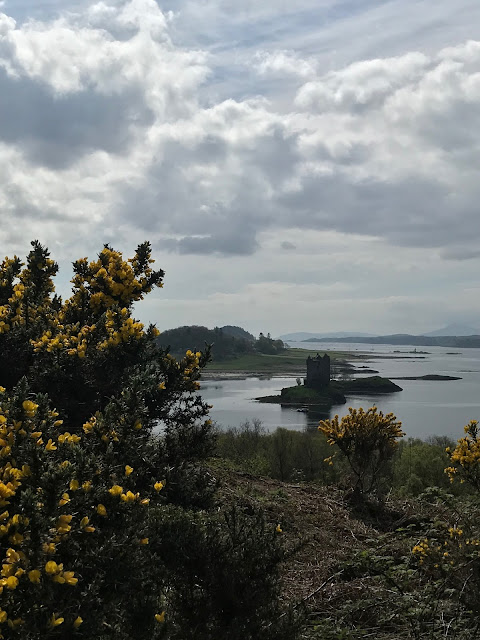 Kilchurn Castle (all ruins, surrounded by water, and required a quick hike through a field filled with Highland Cattle.  The parking lot is easy to miss and isn't marked, so be on the lookout!) 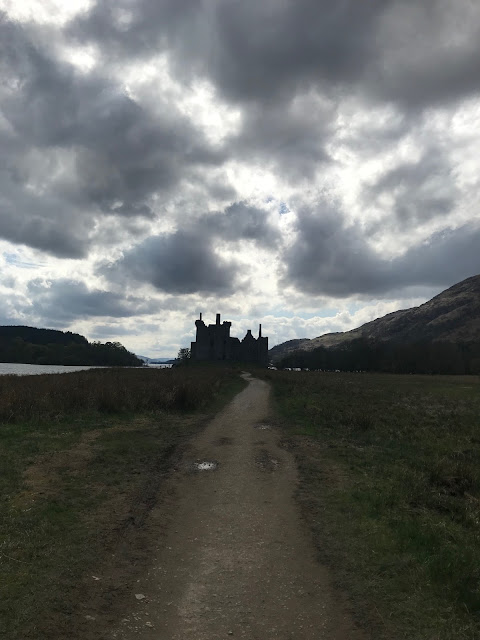 Inveraray Castle (gorgeous building with meticulous gardens, and the filming location of a castle in the show Downton Abbey) 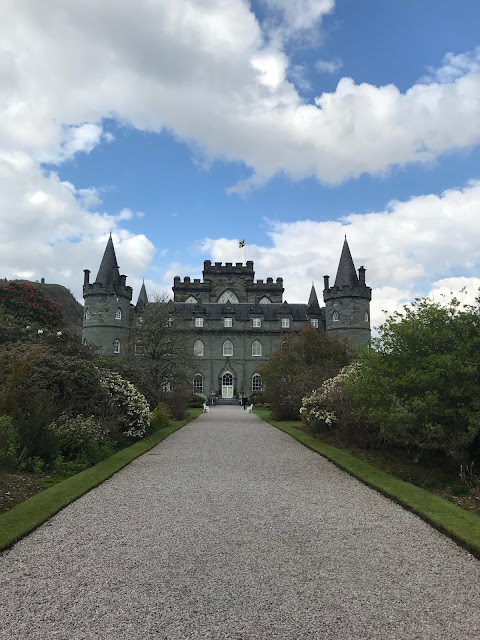 After seeing all of the beautiful natural sites and having a wonderful drive, I was a little overwhelmed by Glasgow (Scotland's biggest city).  We came on a Sunday night, so I was expecting it to be a little quiet and dead, but it was just the opposite.  Monday was a bank holiday, so it seemed like everyone was out celebrating the beautiful weather.  There were so many people, and we were kind of exhausted from driving all over, so all I wanted was a quick meal and to go back to sleep.  We ended up going to Brewdog Dog House, which had some great beers and amazing Seitan burger.  I definitely want to give Glasgow another try when I'm not as tired!

On our final day in Scotland, we took a trip south to the little village of Melrose to visit the famous Melrose Abbey.  This is a partially ruined monastery that was built in the 12th century, and (despite part of it being destoryed) is still in amazing condition.  There was a bell tower that we got to go up, and the heart of King Robert the Bruce is said to be buried on the grounds.  Just look at the meticulous details that are STILL prominent- can't even imagine how awesome this must have looked in its heyday! 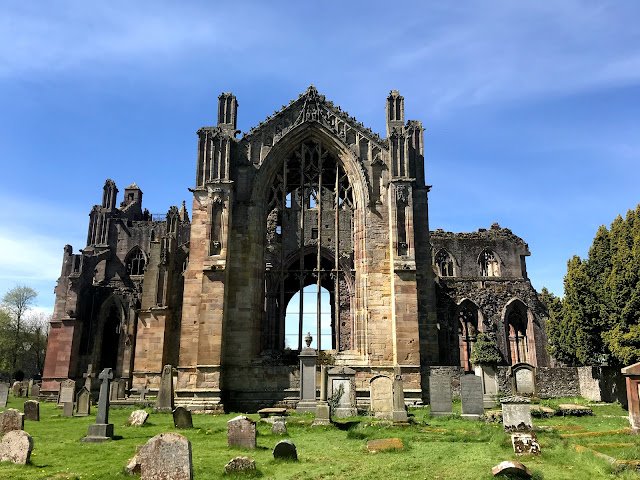 Elsewhere in town, there were lots of cafes and coffee shops to visit. There was also a river walk that went across a historic bridge, which we enjoyed strolling along.  Side note- one of my favorite things about Scotland is the abundance of walking and biking paths.  It seems like they're everywhere, with detailed maps and lots of parking spaces so that we could pull over and explore.  People in general seemed really active, and I didn't really notice many indoor activities (movie theatres, bowling, malls, etc), but lots of things to do outdoors!  It's easy to understand why, with such a beautiful country.

There you have it!  The trip was truly incredible, and I don't feel like I could even capture the beauty of the place or even express how much I love it!  All I know is, I want to go back ASAP :)


Have you ever been to Scotland?
What's on your list of must-see countries/cities?
Have you seen a castle in real life before?
travel United Kingdom