August 29, 2018
Hi everyone!  This post is a long time coming, and one that I've been really excited to write!  Back in December, I took my first trip to Hawaii and had the most amazing trip ever.  When Dan had to go back for work again in June, I jumped at the chance to join him again.  This time, we decided to stop at the Big Island first for a little vacation, then head to Oahu for his work. 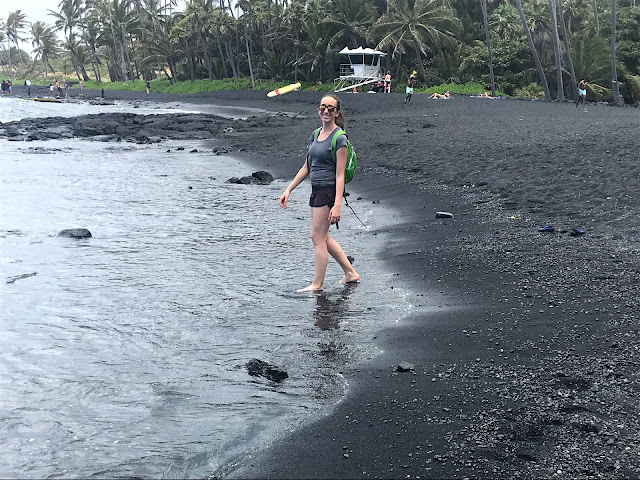 When we were planning, we picked a different area to explore each day.  While the island is, like the name suggests, BIG- I decided to focus on different cardinal directions and tackle a new one every day.  While I don't make itineraries for travel, I did have a few items booked (a few of which got changed around which you'll see in a later post) and that helped us decide what to do each day.  Besides that, we played everything by ear and just did what sounded fun! 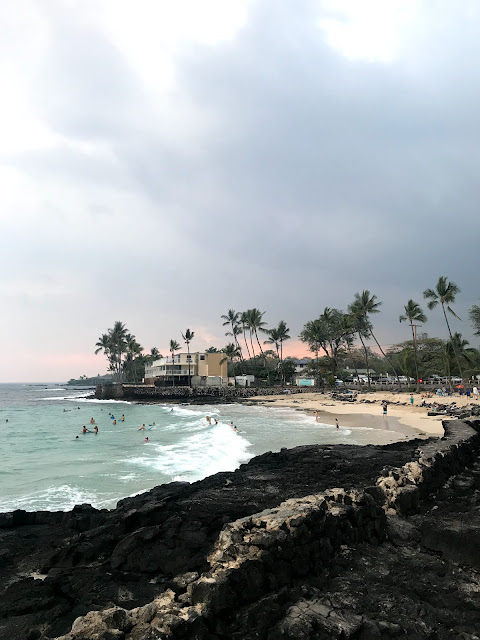 Today I'll be talking about what we did on our first full day in Hawaii, where we traveled down south to see some incredible beaches, and also ended the day on a very high note.  I hope you enjoy!

I love to stay in Airbnb's, and was able to find an adorable house, tucked into the hillside of Holualoa, for an amazing price.  I liked this area because it was located pretty much in the center of all of the areas we wanted to visit, and was also on the sunnier Kona side of the island. 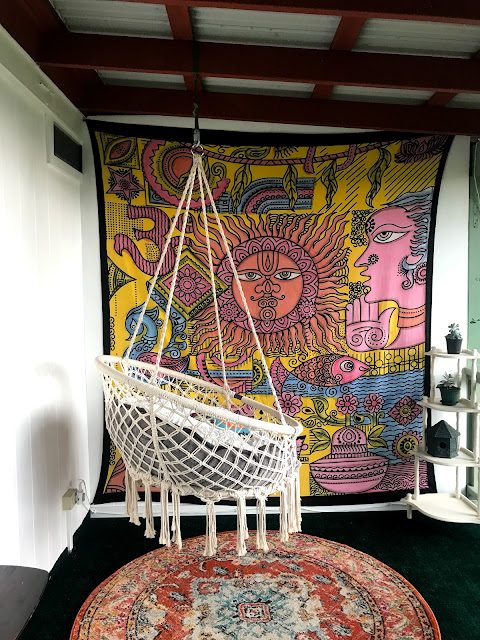 We had a private cottage that was detached from the main house (which I believe the owner also rents out).  There was a kitchen with everything you could possibly need, a bathroom, comfy bed and TV, and a lanai (balcony) that was my favorite spot in the house!  I spent a lot of time sitting in the hammock chair, eating fresh macadamia nuts and fruit from the garden and watching all the chickens and other birds fly around. 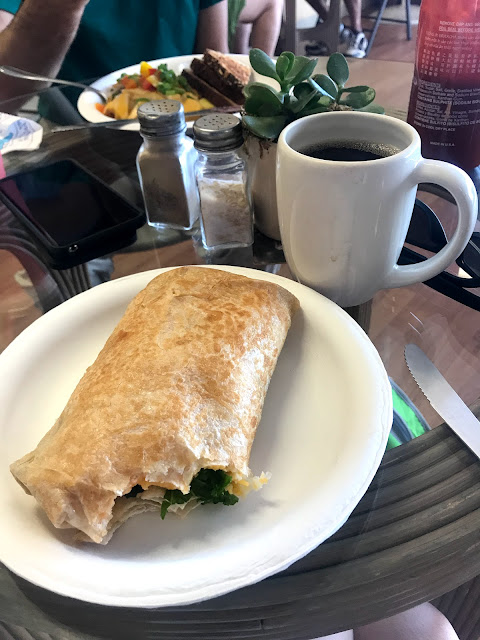 Before we started a day (and week!) full of adventure, we definitely had to fuel up. Along the way to our beach destinations was a little breakfast spot that had lots of great reviews and vegetarian options, so we decided to stop in.  I ended up getting a veggie burrito that was so delicious and filling, along with some coffee.  In the same parking lot, there's a convenience store, which we used to buy some water and snacks for our day. 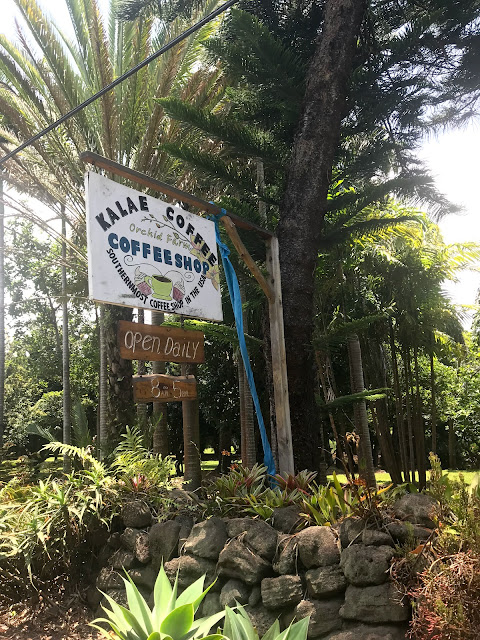 Not surprisingly, the southern-most part of the United States is in Hawaii- specifically on the Big Island!  This is a beautiful spot with perfect, crystal clear water and cliffs all over (which people used to dive into the water).  There's also a coffee shop here (marked as the Southernmost Coffee Shop in the USA- we saw signs like that A LOT!) and a couple of farm stands.

I've heard a lot about this beach, so I knew we had to give it a try.  The beach is about 3 miles away from a large parking lot, and you are either able to get a driver in a pickup truck to take you, be daring and take the rough roads yourself, or just walk.  We opted for the walking route, and I'm so glad we did.  The hike itself was pretty simple- there were lots of different paths made by the trucks, and you basically just follow them along the ocean until you make it to the beach.  Sometimes it felt like choose-your-own-adventure deciding on a trail, but they always joined back up together eventually.  The views were spectacular, and we definitely took our time to take in the sights.  Plus- we wanted to make sure to drink lots of water since there was no shade on the hike and lots of sun! 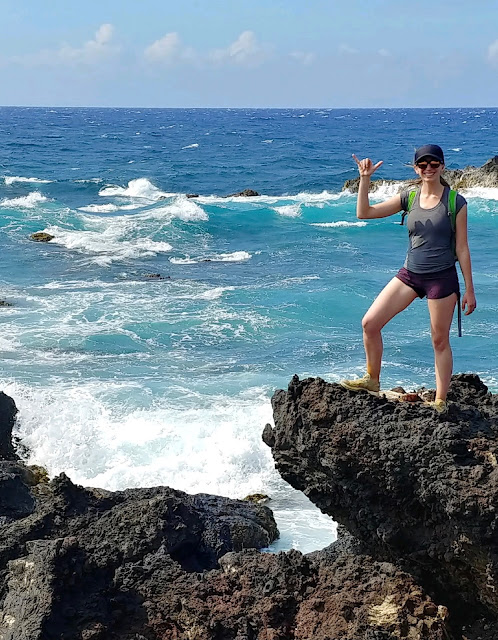 We eventually made it to the beach, which was pretty empty (there was one family and two couples there when we arrived, but they left after a while and we had the place to ourselves!).  It was probably one of the most stunning beaches I've ever been to- bright blue water contrasting with the green(ish) sand, and dramatic cliffs dropping you right into the water.  It was unbelievable! 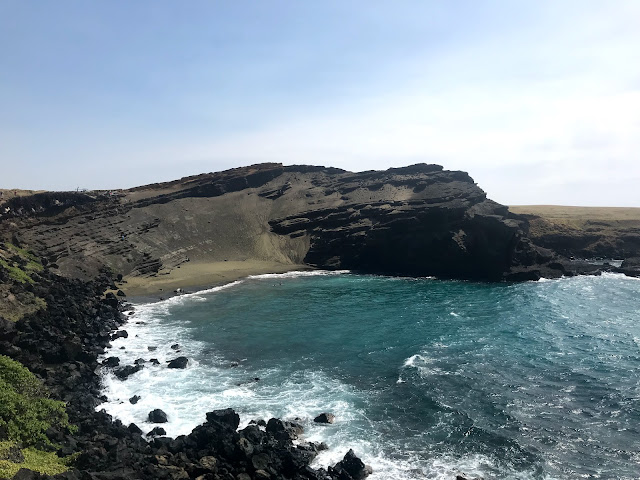 Plus, the water was the absolute perfect temperature and was great to just splash around in after a long, hot hike.  (Side note- if you're wondering why the sand is green- the sand is made up of olivine crystals (whose green color is due to ferrous iron.  There are only 4 green sands beaches in the world!) 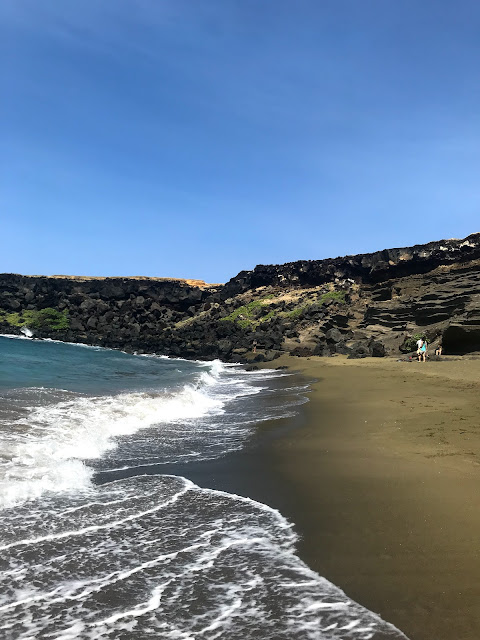 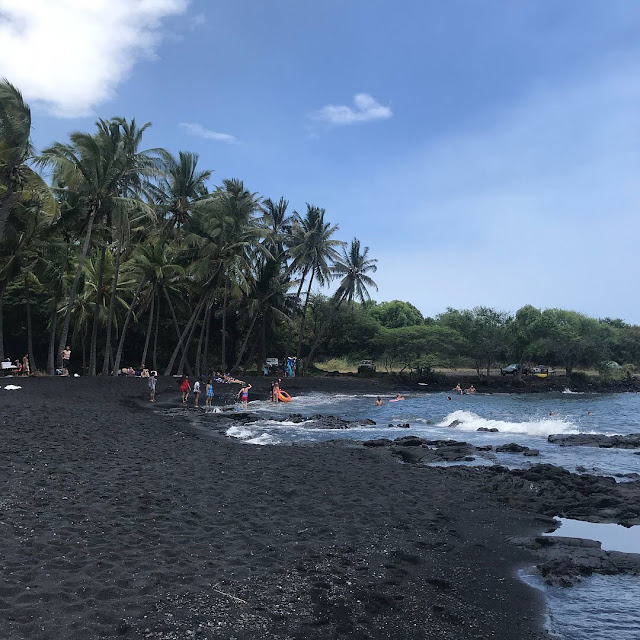 After we finished the hike back, we decided to drive down the road a bit to visit a Black Sands Beach!  This one had a parking lot right on the water, so no hiking was necessary.  The beach was absolutely packed, which made sense since it was a really large beach, right by a golf course, and was also gorgeous.  There were a few times that I was looking at the white water crashing into the black sand and it just looked like I was watching a black and white film..kind of trippy but unbelievable!  On this beach, we also got to see some sea turtles and go on a little adventurous hike. 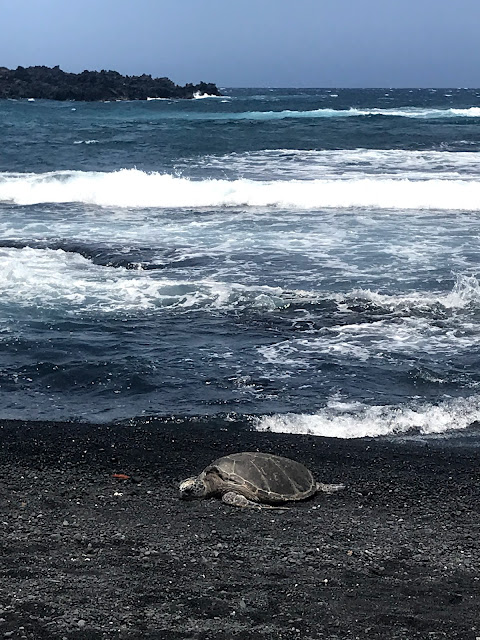 And one more turtle pic because they were so cute 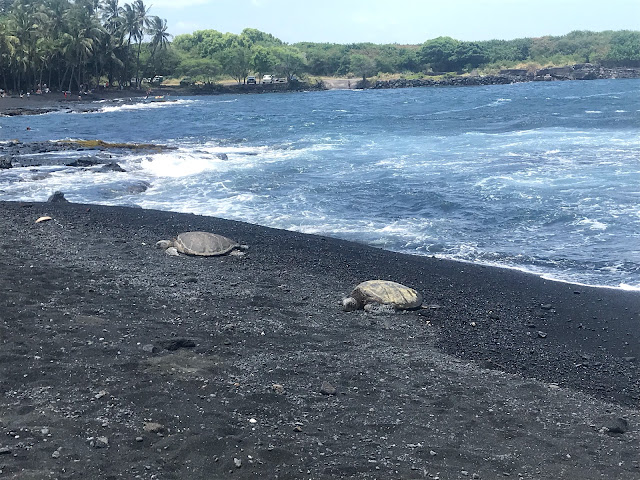 Manta Ray Night Snorkeling
For this trip, one activity that I really wanted to do was go snorkeling.  We've done it a few other times, and it's always incredible to see how much activity and life exists beneath the water!  I heard that on the Big Island, there are night trips to see manta rays (which are apparently really rare, interesting creatures.)  It's something that I've never done and might not get many more opportunities to try again, so I had to sign up!  We decided on the company Big Island Divers, and I was really happy with the choice.  While we decided on snorkeling, they also offered Scuba diving as well.  You could rent masks, fins, and wet suits.  We opted to not get wet suits, and while the water was a bit chilly at times, we were fine. 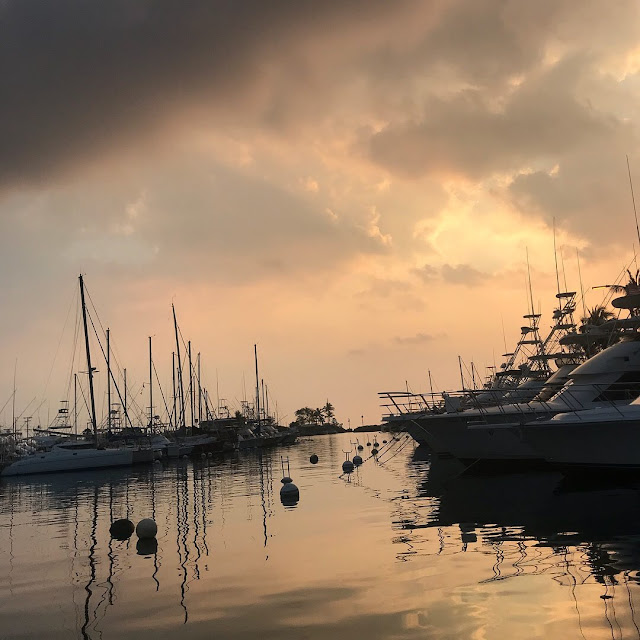 We met up at Kaloko-Honokohau National Historical Park right before sunset, learned a bit about Manta Rays, then set off for a sunset boat ride to our diving spot.  We had a spot near the airport, which our instructors told us was a favorite spot for the animals.  Before we even got in the water, we saw some dolphins and a monk seal!


Once we got in the water, we all held on to a surf board that had lights all around.  This attracts plankton, which the rays come by and eat (if we're lucky!).  We swam around for a while, seeing lots of interesting fish, while it got darker and darker out.  Our guide said that it might not be a lucky day and we might just  have to head back, when two huge rays came out of nowhere to another group nearby that was Scuba Diving!  Looks like it would be our lucky day!  After the rays hung out with that group, they decided to come over and say hi to us, and one of them ended up doing back flips directly under me.  I think at one point he even grazed by Dan!  It was such an unbelievable experience to see these HUGE, 15 foot, 2000 pound creatures swimming directly at you..sometimes even coming straight at you with an open mouth.  Mantas all have distinct markings, so our guide was able to identify them and tell us more about their history (including the back flipping guy, Koie Ray, who had some scarring and a missing cephalic fin from being caught in fishing line.) 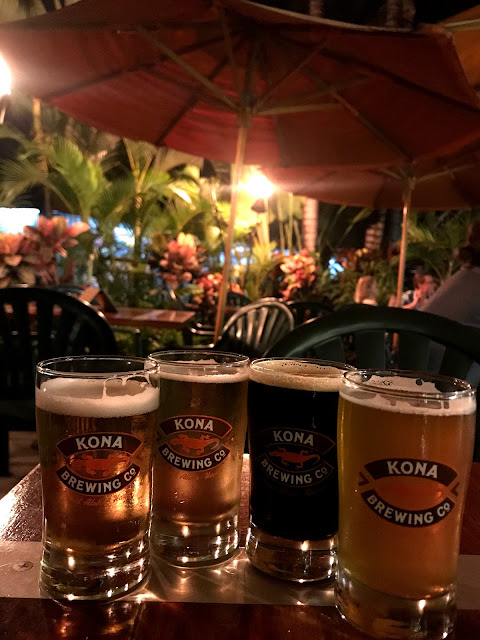 Even though it was late, we definitely weren't in the mood to go to sleep after such an incredible experience.  Luckily, Kona Brewing was right down the street, so we stopped there.  This is one of my favorite breweries to visit in Hawaii (there are locations in Oahu as well!) because their beer is AMAZING..so many great flavors besides the mainland favorite Big Wave, and the food is great as well!  I decided on a flight of beer as usual, and also got some poke.  When in Hawaii!

Have you ever been snorkeling or Scuba diving?
What color beaches have you been on before?
hawaii