August 10, 2018
Hi everyone and Happy Friday!  I have an exciting post and update to share today- I completed my first triathlon!  If you've been following for the past few months, I've been training for the North Park Triathlon.  I chose this race because it's close to my house, so I could get in a lot of on-course training, and it was also a sprint, so I could ease my way in to this new sport!

I really enjoyed the entire process of tri training and the actual race!  I'm definitely going to be doing more, and now know exactly what I can improve on next time (spoiler alert- SWIMMING).  Here's a recap of how the race went- 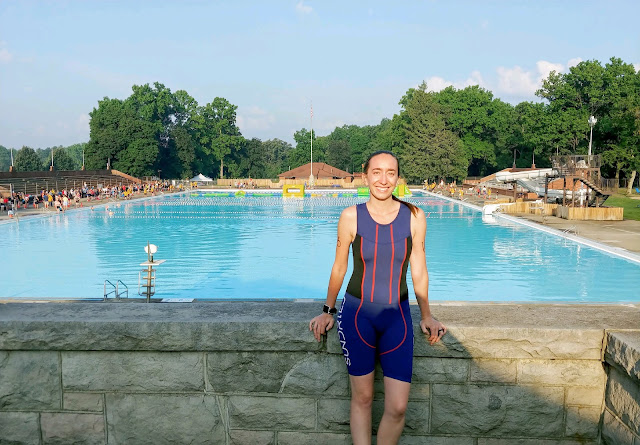 For the swim, we were in a huge pool (the largest in the county) for a 700 meter swim.  The pool length is 50 meters, so luckily I only had to do 7 laps (or 14 lengths).  In each lane, there were four athletes, with two at each end.

As soon as my heat started, I took off at a comfortable pace on the swim. I'm used to swimming in a normal sized pool (25 meters), and having the length be double didn't really bother me at first.  I was feeling strong and was even able to pass the two athletes that started at the other end of the pool!

Unfortunately, by the time I hit the halfway mark, I started to feel like I was choking on the water. I'm not sure what happened because this has never happened to me in any of my workouts, but every time I went in the water it just felt like I wasn't able to breath.  So, I made sure to keep moving, and ended up doing a sort of doggy paddle/side stroke while I kept trying to cough out the water.  Physically I felt fine and kept trying to swim normal again, but kept getting the same choking feeling.  It might have been nerves or just inexperience, but it was so frustrating!! 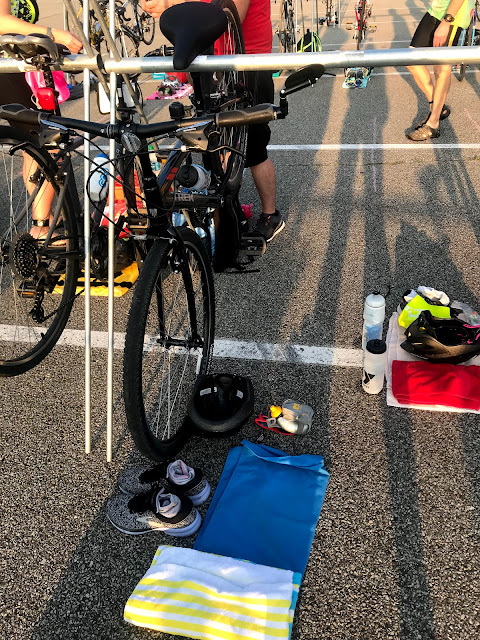 I finally finished and was happy to be done (and not kicked out to the "slow swimmers lane" to make room for the next heat), so I jumped out of the pool and ran around the pool and out to the transition area, where I quickly toweled off, threw on my shoes and helmet, and took off! 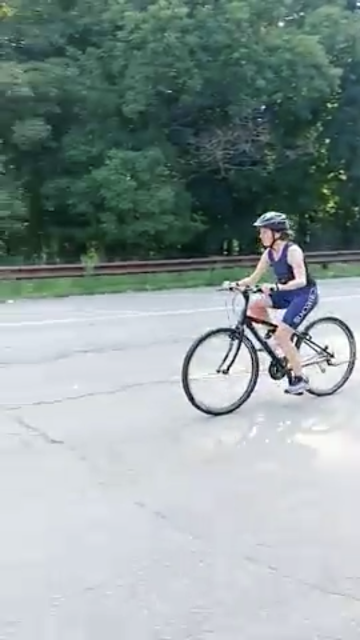 The bike was actually a ton of fun!  The course we went on was a loop around the pool area and is a little over 2 miles, so we had to do 5 total laps.  The course is really hilly, so my strategy going in was to really push it on the straight and downhills, and make it up the hills without stopping.

This is a course that I practiced a lot during training, and tried to get in at least a few loops every weekend.  I got to practice shifting up and down, which really helped me on race day!  I definitely felt tired and sluggish on my first lap, thanks to just finishing up the swim.  By the time I hit my second lap, I was feeling much better, and seemed to keep feeling better the further on I went.

Before I knew it, I was finishing up my final lap, and pulled back in to the parking lot where the transition area was.  I dropped off the bike, grabbed my sunglasses and hand waterbottle, took a salt tab, and struggled to start running (jello legs!) 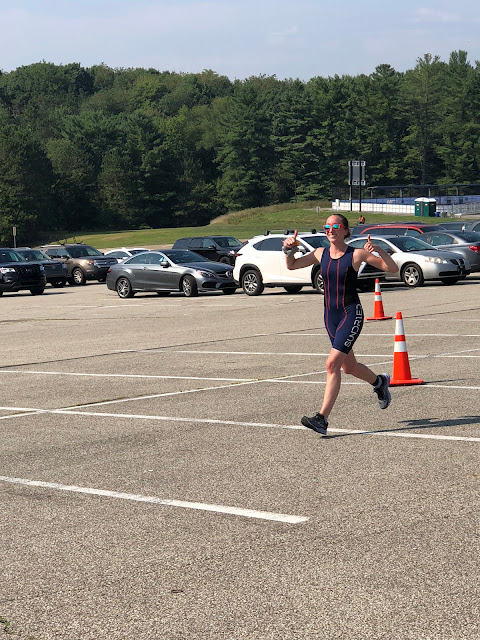 The run was on trails that went around the park, which meant that we did not have to run by the bikers (good), we had a nice, soft surface and shade to run in (double good since it was a really warm and sunny day) but also meant HILLS!  My strategy quickly became walking up any steep hills while I got some water, and taking off when the trail flattened out.  This worked out great for me, and I started to pass people left and right.

The first mile of the run was definitely the most difficult and hilly, but by the time we passed the water station at the one mile mark, the trail had more rolling hills instead of sharp climbs.  At this point, I took in a Margarita Shot Block to get in a bit more sodium.  I was really sweating at this point, and just ready to be done!

The race finished on the side of the bike course, close to the transition area.  I could see my cheering section and gave it everything that I had left in the tank!

Have you ever done a triathlon?
Which would be your favorite leg?
What's the most recent item you've checked off your bucket list?
races Triathlon