December 13, 2019
It is officially the one year anniversary of my trip to Japan, so it's time to share the final post!  Kobe was our final day trip, and it was probably my favorite. Not only were we treated to perfect weather (a nice departure after the rainy day we had in Nara), but there was so much to see and do in the city. I loved it!  Here are some of my favorite things we did-

The very first thing we did after stepping off the train was to head to the Nunobiki Herb Garden.  I actually found out about this from a YouTube video, and it sounded like such a fun and unusual place to visit!  The trip started with a cable car to the top of the gardens (which gave us an amazing view of the city).  There was a gift shop and cafe at the top, and we got to explore different herbs through all of our senses. 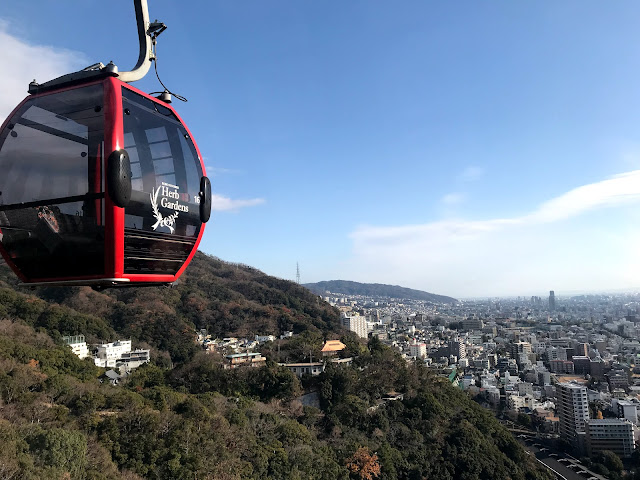 We made our way down the pathway and saw different exhibits of plants and flowers.  There was a huge glass house that reminded me a lot of Phipps back home with rainforest plants and waterfalls, and also helped warm us up a bit!  At this stop there was also a "lovers bell" which Dan and I rung together, and a foot bath. 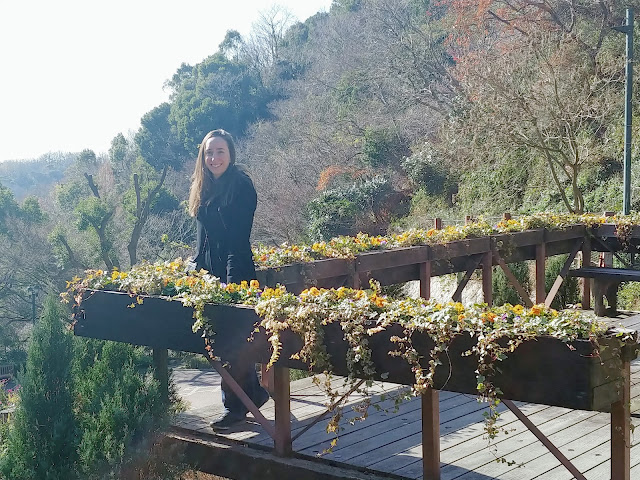 Further down there was a four-seasons garden and more little houses.  From here, there were different paths we could take down, or get the cable car for the less-adventurous.  We opted to visit a waterfall, which involved a steep downhill hike.  The park was so cute and definitely worth a stop.

After our hike, we needed something warm!  I heard about a fancy Starbucks, which was in the Kitano neighborhood.  This was a really interesting area, because all of the buildings were western style, because this is where foreign consulates would live when they would visit Kobe!  A lot of these are now museums or preserved mansions that you can tour, but we enjoyed just window shopping ;) 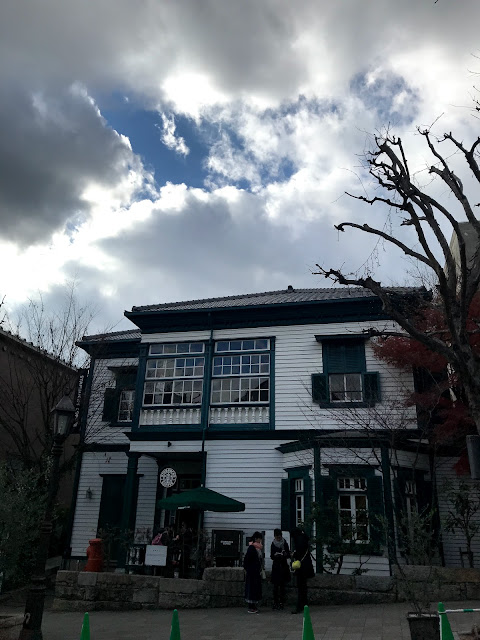 In the Starbucks, I again tried to get the Christmas Tree drink that was advertised all over Japan, but this shop was also sold out!  Instead, I got a Volcano latte, which was pretty much an Oreo drink with coffee.  It was good and hit the spot!  I also really liked the inside of the Starbucks, which felt like a converted house, filled with cozy rooms to enjoy your drinks. 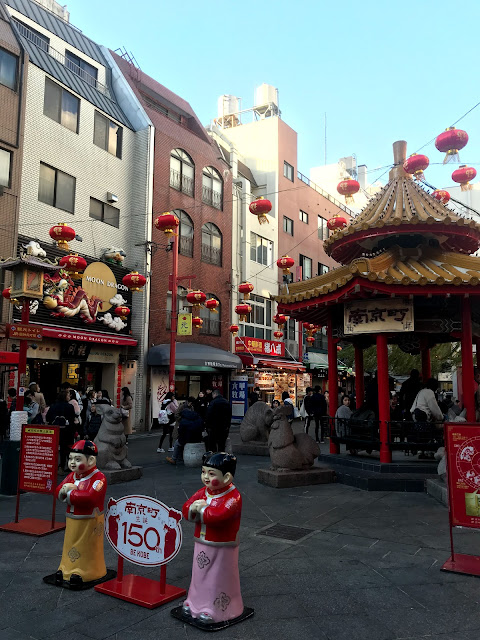 The next neighborhood we explored was Chinatown.  There were beautiful red decorations and dragons everywhere, along with cute shops and delicious street food.  We wandered around and stopped at a few places for snacks.

While we were in Chinatown, we stumbled upon a Kobe beef restaurant.  A lot of places advertised the beef, which is a famous variety that is only from Kobe.  The meat is supposed to be the best in the world, and only a handful of places outside of Japan are legally able to sell it!  Most restaurants that advertise Kobe beef are lying and are just saying that to mark up their price. 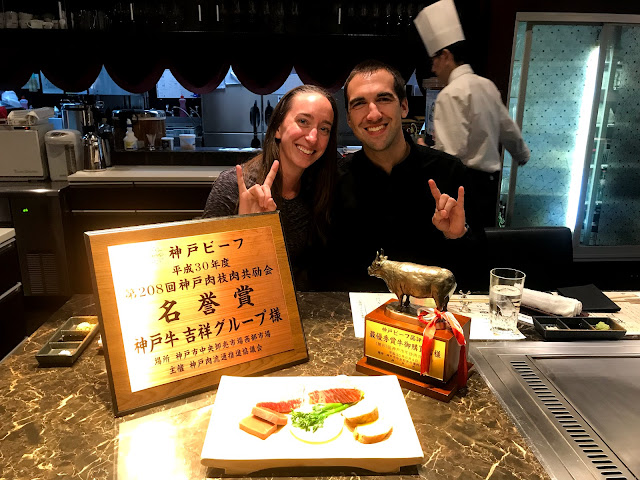 Since this was a once-in-a-lifetime type of meal, I had meat for the first time in 3 years!  Dan and I shared the smallest portion of the highest quality the restaurant sold (which was still about $80).  The chef cooked the meat on a hot top in front of us, along with veggies and served it with rice and miso soup. 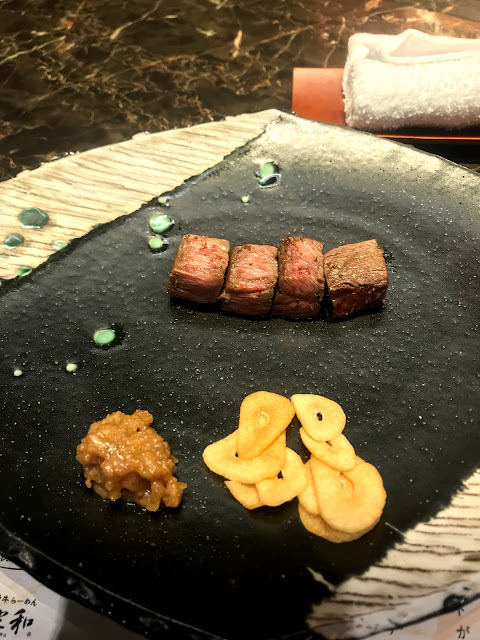 There were different toppings for the meat (garlic, salt, soy sauce), and the chef instructed us how to eat each piece.  The meat was so succulent and buttery soft and incredible!  I haven't eaten meat since then, but it was definitely worth the experience.

Our final area to explore was right by the water in an area known as Harborland.  This is where you can find famous monuments and statues, including the "Be Kobe" sign and this interesting building- 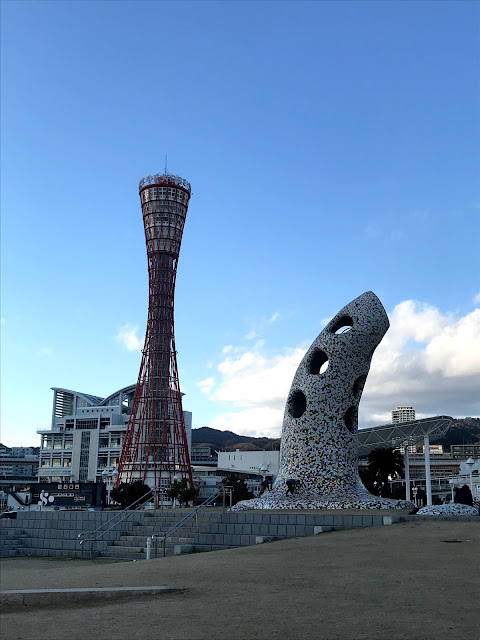 There is also a touching tribute to the devastating earthquake in 1995.  Some of the damage was left, along with pictures and a memorial to the people who lost their lives. 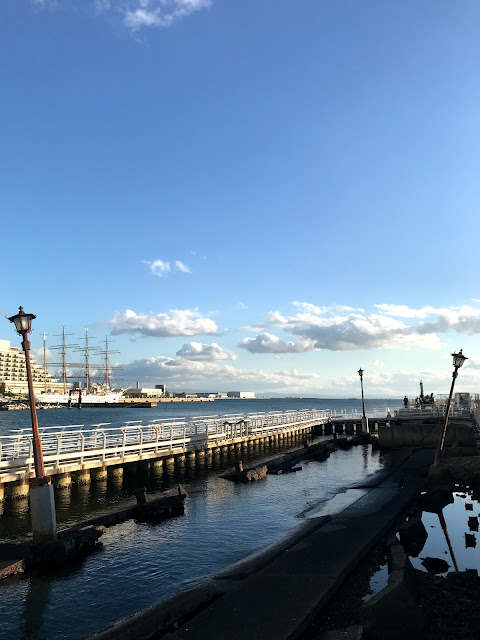 There are also a lot of shops and entertainment in this area.  It was a fun and beautiful area to walk around in, and after exploring a bit longer and seeing the sunset we headed back to Osaka.  Our trip was sadly coming to an end, but it was AMAZING!


What is your favorite day trip that you've taken?