August 02, 2017
Hi everyone!  Today I'm going to be sharing a race recap from the Elorapalooza 5 Miler.  I wasn't originally planning on running this race, but since Sokphal was visiting from DC and wanted to enter a race while she was here, we both decided to run it!

This is a small local race that raises money for the Elora'a HOPE Foundation, which supports blood cancer research, provides scholarships for local students, and makes grants to cover non-medical needs of cancer patients and their families.  The race and foundation is named in honor of Elora Geier, who went through a lot of challenges in her life before losing her courageous battle with Leukemia in the 7th grade.  This year was the 12th annual event, and a 5 mile race and kids' fun run got added to the original 5k and 1 mile run (or lollygag).  I've done the 5k a few times in the past, so I was excited that a longer distance was added.

I really enjoyed this race and ended up getting a new PR in the 5 miler, so I'm excited to share this recap today!  Let's get right into it:

There were three different races- a 5 miler, 5k, and 1 mile, each starting about five minutes apart.  The 5 miler went first, so we were all told to get up to the starting line.  There were only 31 of us, so I pretty much started at the front line!  After a group hug and group singing of the National Anthem (both traditions of this race), we were off. I kept my first mile nice and easy to loosen up, since I was pretty sore from my long run the day before and a ton of walking all over the city. 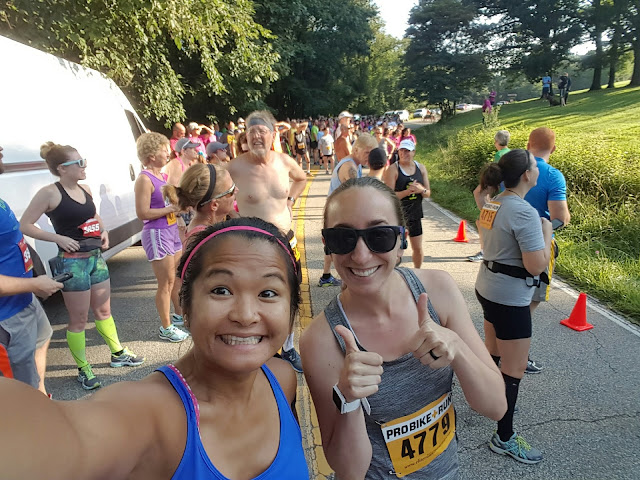 There were lots of rolling hills along the course, and this mile was mostly all downhill.  Since this is an out-and-back course, I knew I would have to come up this hill pretty soon!  My new strategy changed to taking the downhills hard to make up time, then keep moving on the uphills. 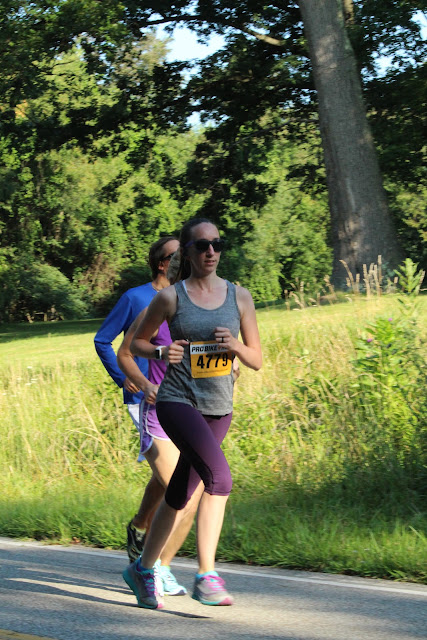 We made it to a loop at the end of the Lodge Loop road, which was our halfway point.  It was nice to have a loop to run around instead of a traditional out-and-back, but I couldn't tell what place I was in.  I saw the lead male and female coming around, but everyone else was close enough to me that I didn't see them coming back.  I saw two females in front of me, and in this mile caught up to them and passed them. 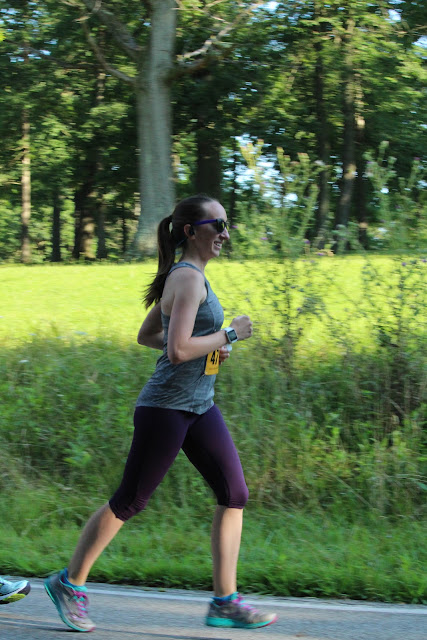 This was definitely the hardest mile of the race.  I was getting warm (but was happy that I grabbed a sip of water at all the water stops along the course) and we hit the uphills that I enjoyed going down so much earlier in the race!  Luckily, I could see Sokphal up the road and made it my goal to catch up to her.  We were also on the 5k course at this point, so I picked out some of the people walking the race and tried to pick them off to keep my mind off the hill! 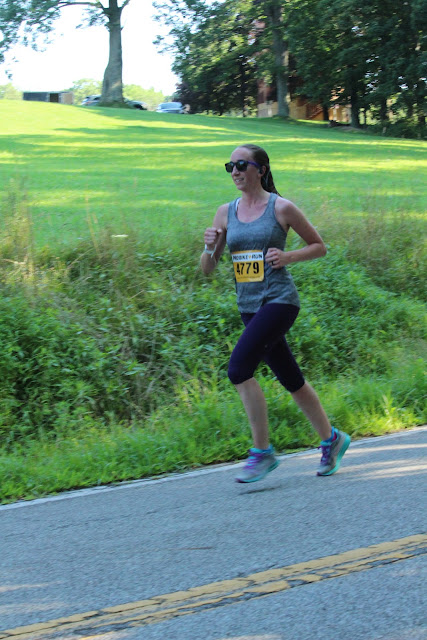 Right as we passed the final mile marker, I caught up to Sokphal.  She told me to go ahead, so I pushed myself for the last mile as hard as I could.  I had no idea what my pace was and just made it my goal to stay ahead of her.  Nothing like some friendly competition to help really push yourself, because I was absolutely SHOCKED when I saw my pace at the end.  I don't know the last time that I saw a "7" in a mile split!

Here's a look at the race's elevation, and you can see the tough mile where I struggled! 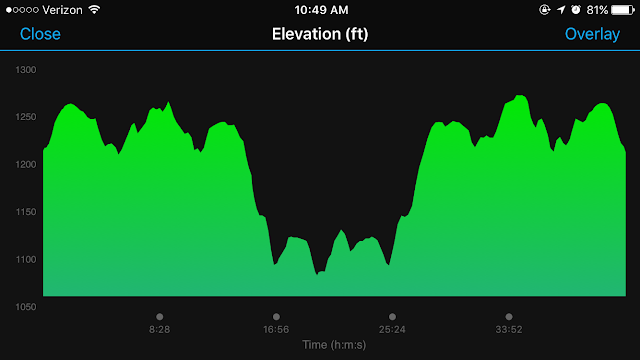 After the race, there was a huge buffet- cole slaw, potato salad, hummus, cold cuts, baked beans, roasted potatoes, ham barbecue, pulled pork, and cake.  There was even free Rita's!  We grabbed some food then settled down to listen to a bluegrass band playing on the stage outside of the Lodge.  I haven't done a lot of races here (most are at the Boathouse), but it's such a nice venue!  Very quiet with lots of space. 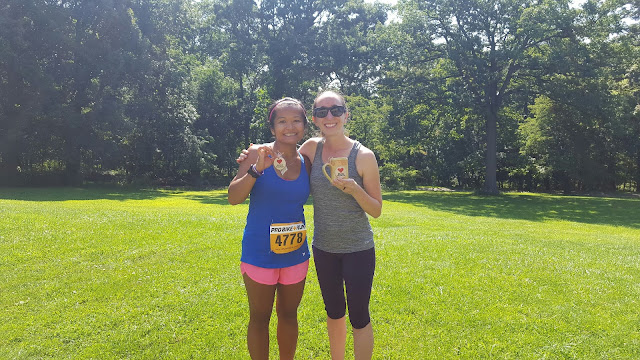 The award ceremony happened a bit later, and I ended up getting 3rd place female in the race, and Sokphal won her age group!  The medals are really unique- the family who organizes the race orders them from a foundation for mentally disabled adults.  The adults create art work that is sold, and they earn 100% of the profits from their art.  For the age group winners, the artists created medallions that are hung on string (an artistic version of a traditional medal), and overall winners got beautiful ceramic mugs.  Every year the prizes are different, and I absolutely love the mug! 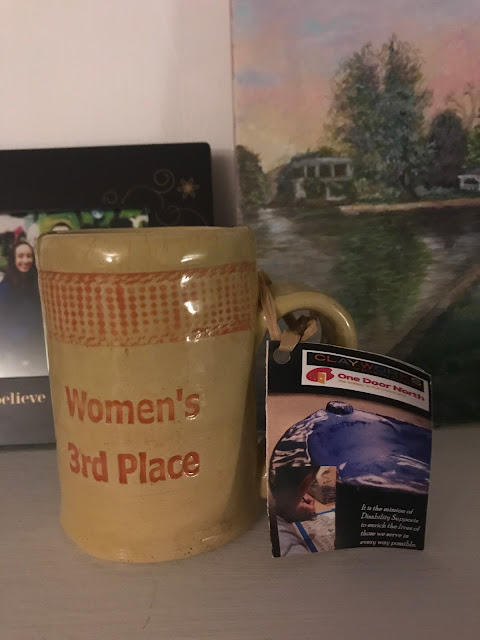 Besides the award ceremony, there was also a silent auction and raffle.  I ended up winning one of the auction prizes- 4 tickets to go tubing at Seven Springs.  I've never gone tubing and thought it sounded like a lot of fun!


Do you prefer small races or big ones?
Have you ever gotten a surprise PR?
What is the coolest race medal you've ever gotten?
5 miler races