November 11, 2019
What a whirlwind this weekend was!  Even though I was only in Indianapolis for 24 hours, it seemed like days, and I had a really great trip.  Nothing really went as I planned it (most notably the race), but I had such a fun time and I'll be recapping everything today. 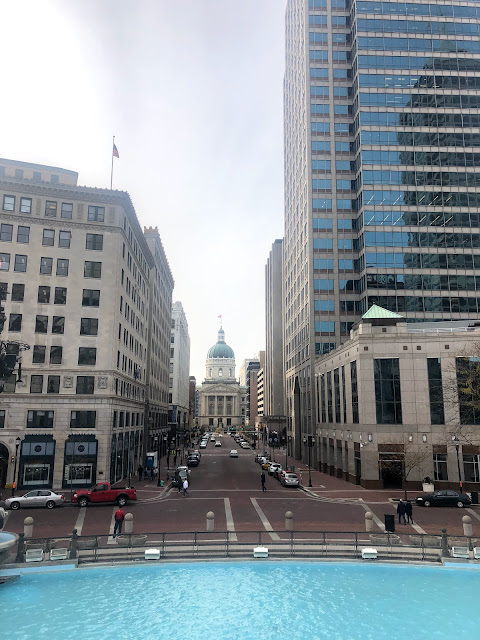 Dan and I drove up to Indy on Friday morning.  It was a pretty easy 6 hour drive, and as soon as we got in and checked in to the hotel (we stayed at the Hyatt Place downtown, which I highly recommend), we headed to the City Market for some food.  There was a vegan restaurant called Three Carrots, so we got sandwiches- mine was a seitan BLT that hit the spot, while Dan got a pulled BBQ wrap.  We also stopped by the tap room for some local beers! 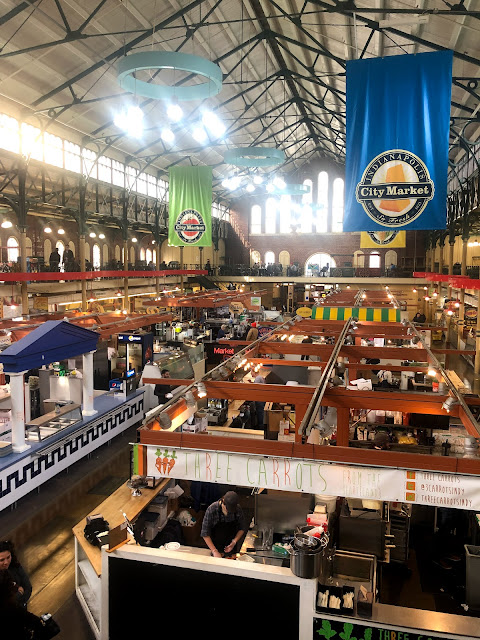 After stopping by the Convention Center to pick up my packet and meet up with Jess to make plans for the morning, we stopped by the Bankers Life Fieldhouse, which was across the street from our hotel, to see how much tickets were for that night's Pacers game!  Neither Dan nor I had ever been to an NBA game before, and since the location couldn't be better and the tickets ended up being $13 each, we decided to go.  The game was amazing, and we left after halftime to make sure I got enough sleep! 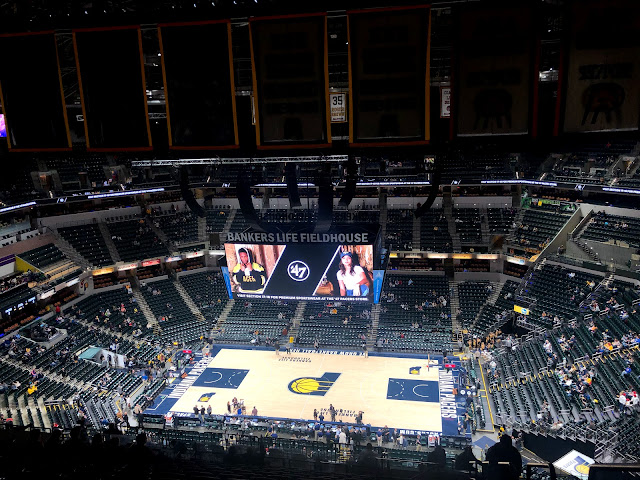 In the morning, we woke up around 6 for breakfast, and met up with Jess and her husband in our hotel lobby.  It was chilly out, so we wanted to stay in as long as possible!  Plus, the hotel provided bananas, coffee, water, and indoor bathrooms for us :) The race start was less than a half mile away, so we left with about 20 minutes to spare, and made it to our corral just in time. 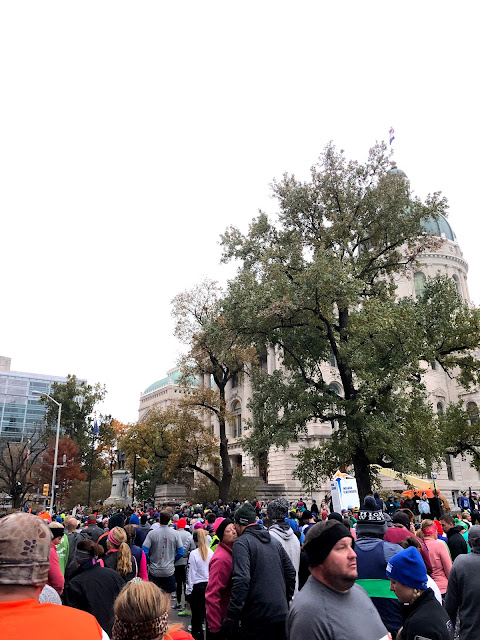 The race started out with a loop around the downtown area, before heading north.  The neighborhoods we ran through were really nice, and the crowd support was amazing!  So many people came out to cheer, and a lot of them had on fun costumes (including an entire block full of Star Wars characters). 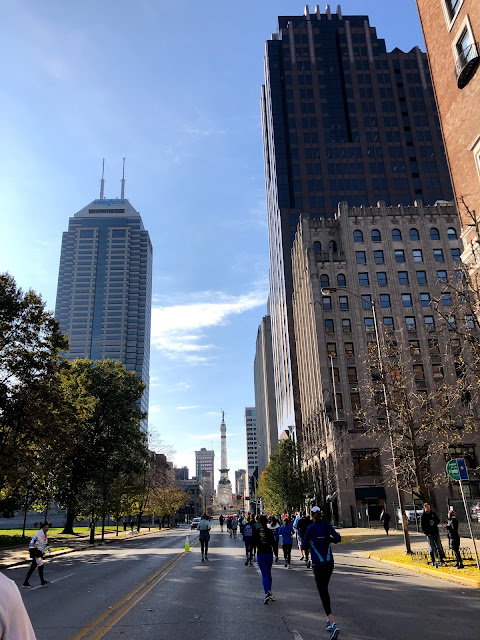 Pretty much as soon as we started, I could feel some pain in my inner thigh, which is the area that's been bothering me for the past few weeks.  Usually the pain will go away once I start running, but every mile it seemed to get worse and worse.  I could also feel it starting to spread to my knee (I think I was compensating a bit and changing my stride, so that could be why).  Since the race split at mile 8 for the half, I made my mind up then to cut my race short and finish with a smile on my face!

It was a really fun race, and while I'm sad that I didn't finish the full marathon (again...) I really don't regret my decision.  My training went really, really well- up until I hit 20 miles.  I followed every workout and long run to a T and also cross trained more than ever!  I just think that my body is happy with half marathons, and can't handle the mileage of a full marathon.  I'm fine with that and am officially hanging up my marathon shoes.  In the past 4 weeks I've completed 3 races, so I'm also just ready to take a bit of time off from running. 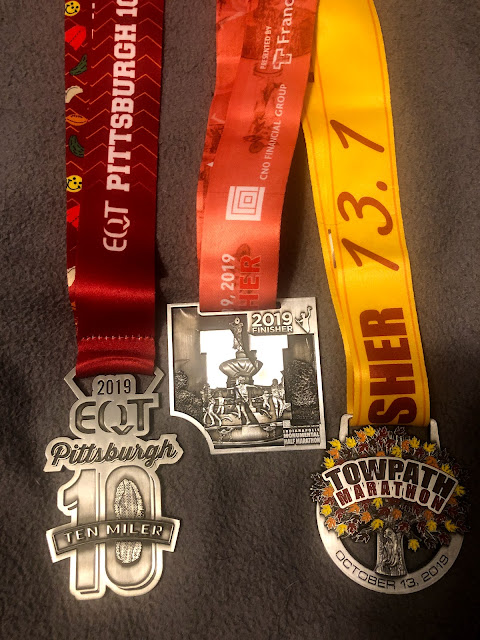 After I finished and met up with Dan, we headed to the hotel so I could shower and change, then we grabbed a coffee from Bee Coffee Roasters and headed back to the finish line to cheer on all the runners.  I got to see Jess come in as well- she finished about 20 minutes faster than her goal and previous PR and I couldn't be happier for her! 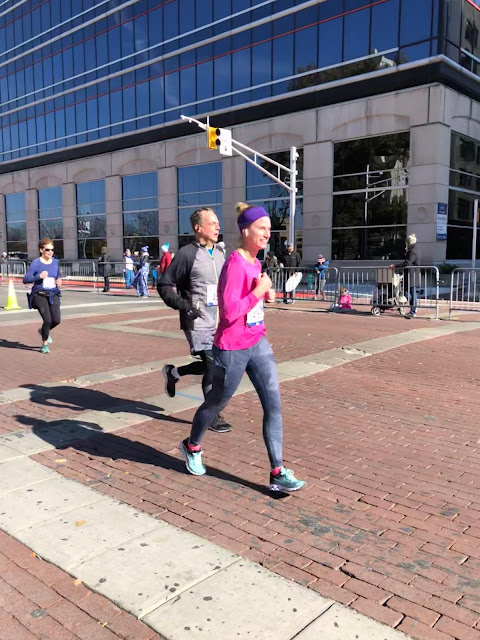 On our way out of town, we made a pitstop about 2 hours away to Mother Stewart's Brewing in Springfield, Ohio.  It was a really cute brewery that played the Penn State game (another disappointment) and had some great beers.  I also got to try the Impossible Whopper from Burger King as well- so good, especially after a race. 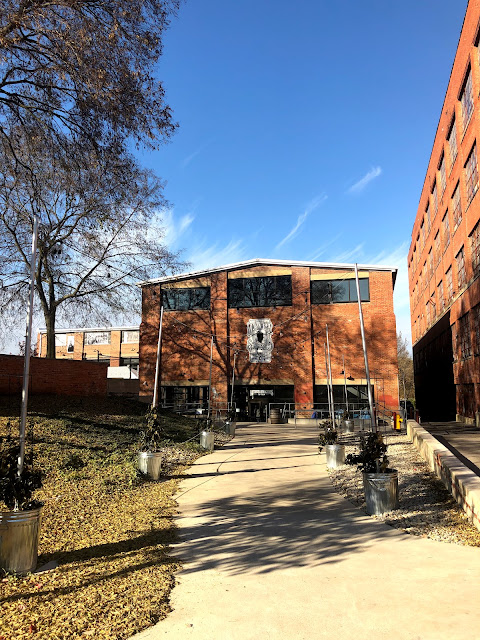 So- all in all it was a great trip and I walked away with some hurt legs and a shiny new medal!

Tell me about your weekend! Did anyone else race?
Have you been to Indy before?
races