November 20, 2019
Back again today with the next stop on our trip, which was Hiroshima!  This was a little different than other places we've visited, because this was just a stop to get to our next destination (Miyajima, coming in the next post).  Our train from Kyoto took us into Hiroshima, where we had to change to a local train to the Miyajimaguchi station and finally get a ferry over to the island.  But, since we were stopping in Hiroshima anyway, we spent a few hours exploring. 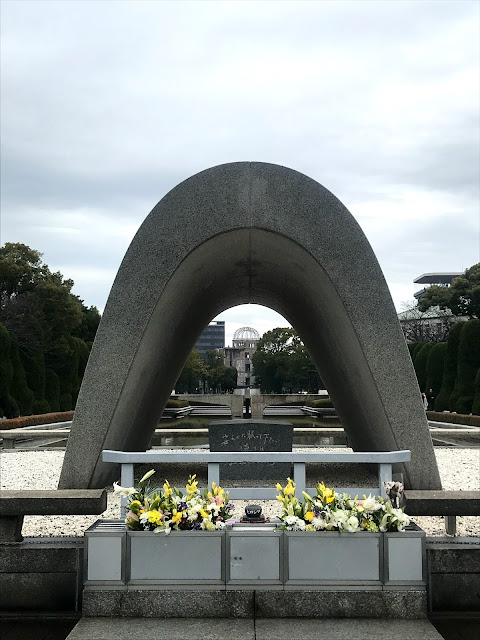 The good thing about most train stations we were in was that there were cubbies for your luggage so you could stow and walk around without lugging around a bunch of bags!  We took advantage of that, then set off for the city. 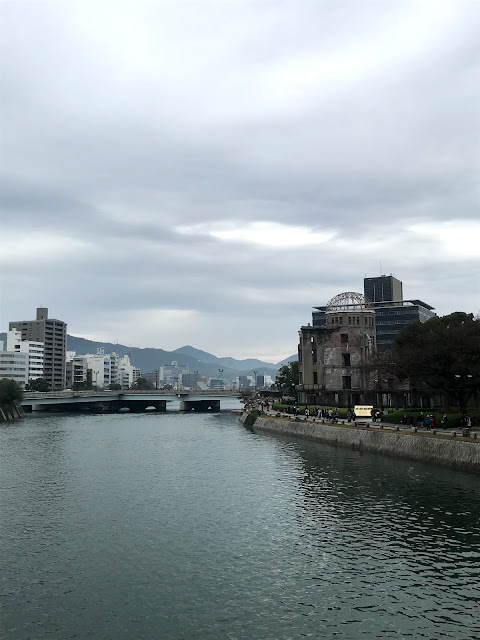 I had a vague idea of the significance of Hiroshima, but definitely learned a lot more while we were there.  This was the first city that was targeted by a nuclear weapon, back in 1945 during World War II.  You could still see remnants of the damage, most notably the Atomic Bomb Dome.  This was the only building in the area left standing, and hasn't been restored. 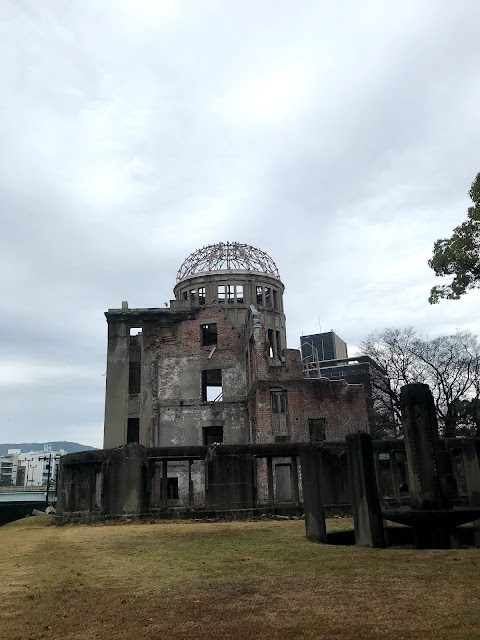 The dome sits in the Peace Memorial Park, which has a few exhibits talking about the events and aftermath of the attack.  One exhibit in particular was incredibly emotional to see- the Children's Peace Monument.  This was built in memory of all of the children who were affected or died in the attack, notably Sadako Sasaki.  While she was in the hospital being treated for leukemia caused from the radiation, she began to fold 1,000 cranes.  In Japanese legend, whoever folds 1,000 cranes is granted a wish.  Some stories say that she fell short of her goal before dying, but her classmates finished and buried her with the cranes, while other versions say she surpassed her goal.  Now, students and other people leave folded cranes at the monument in her memory. 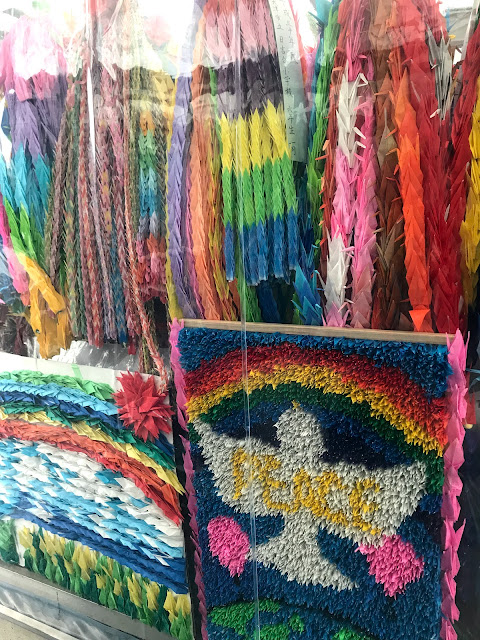 After leaving the park, we went over to Shukkei-en, a beautiful botanical garden.  There was a path around the grounds as well as koi-filled ponds, plants galore, and stone buildings. 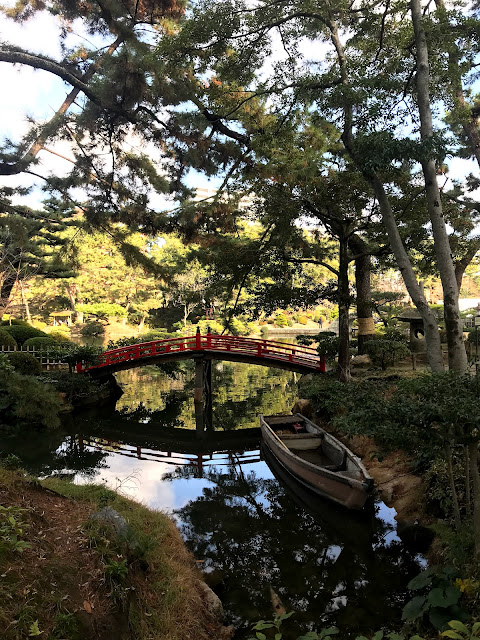 It was a really clear and crisp day out, so it was a great time to walk around the park.  Japan is known for its gardens, so I was happy to get to explore this one! 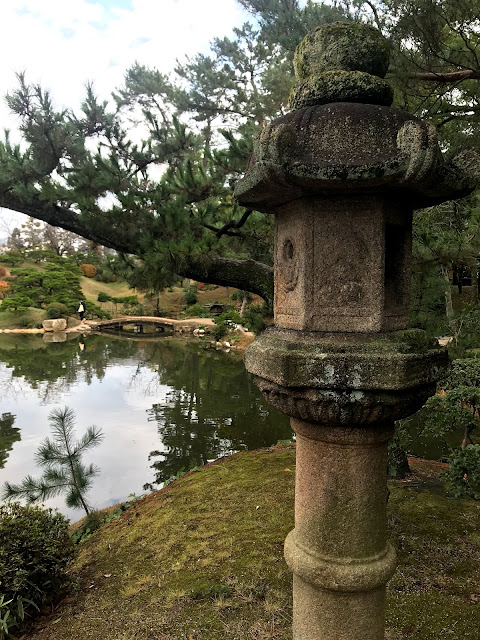 We worked up an appetite from walking around so much, so we made our way to Okonomimura, also known as an Okonomiyaki food theme park.  What that means is that there were four floors of restaurant after restaurant that all served Okonomiyaki.  This word roughly translates to "cooked how you like it" and is described as a Japanese savory pancake containing a variety of ingredients in a wheat-flour-based batter.  We also had this in Tokyo, where we got to make our pancakes ourselves.  Here- we picked a restaurant (whichever one had a few people but wasn't too crowded), and picked our toppings.  Then, the chef cooked it up for us and we ate it off the hot griddle (or ask for a plate if you're a wimp like me) with little spatulas. 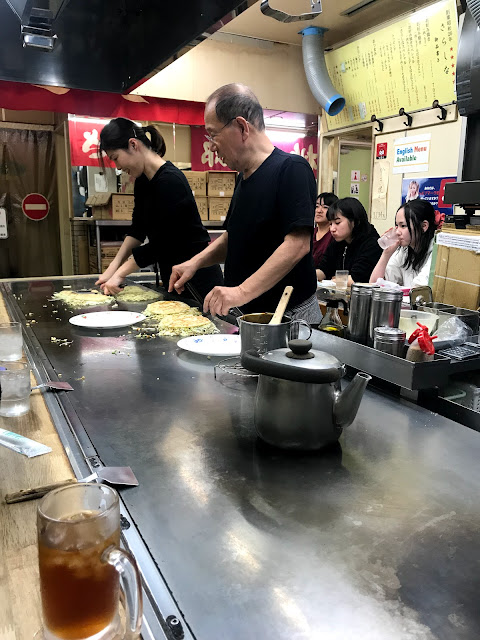 While I liked the Okonomiyaki we had in Tokyo, this one was different.  Every city has their own style.  In Hiroshima (where it's referred to as Hiroshima-yaki or Hiroshima-okonomi), the ingredients are all layered on top of eachother rather than mixed together. So, the chef would pour down the batter, then place it on top of tons of cabbage, then slide that on top of noodles, then add in the meat or seafood, fry an egg on top, and serve (with whatever toppings or other ingredients you want). It was SO delicious and we had a great time talking to the super friendly chef! 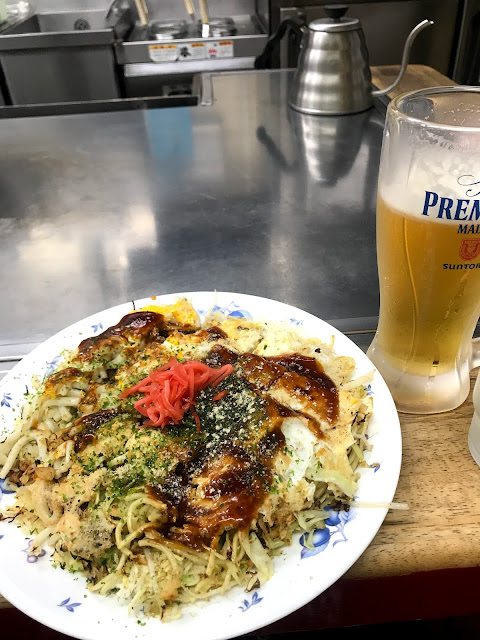 After we ate, we headed back to the train station to kick off the next part of our trip- on to Miyajima.
Japan