It feels like it's been forever since I wrote my last post, when in reality it was just over a month ago.  Funny enough, my last post was called "Snowing Again", and as I write this..in the middle of April..it's snowing outside.  Crazy spring, eh?  It's almost like the universe was waiting for another post on the old GretchRuns blog to kick itself into spring weather.  So, if today is the final day it snows on the east coast and it's all warm weather from here on out, you know who to thank.

Today's post is just going to be a good old catch-up sesh (especially since I missed my own What's New With You) linkup.  Here's what happened in March!

- I got injured.  Boo!  Once again, marathon training was going great, then I got an injury out of nowhere.  It was pretty frustrating because I was building up my mileage slowly, taking my easy days easily, cross training, and stretching after every run.  I was convinced that I had a femoral stress fracture, so I even went to Urgent Care for an x-ray (my first trip there EVER!).


I basically never got an answer, but then my mom told me about a coworker's daughter who had similar issues, and her doctor suggested adding a Vitamin D supplement.  Coincidentally, at my last two physicals I got blood work done, and in both I showed up as having a Vitamin D deficiency.  I looked up the symptoms, and they were exactly what I experienced (and similar symptoms to a stress fracture)- bone pain, stooped posture, muscle cramps, weakness, and tingling.  It's common for vegans to have these symptoms, or people who live in places that don't get a lot of sunlight.  So, since I'm a Pittsburgher who eats a mostly vegan diet and it was a dark winter, I'm a prime candidate for these problems!  Luckily, since I added a supplement and completely stopped running for a few weeks, I've been feeling great.

- No marathon for me!  Remember how I was planning on running the Newport News Marathon, but then the date didn't end up working out?  Then, I decided to change my registration for Canton's Hall of Fame Marathon from the half to full?  Well, as it turns out my registration wasn't changed, so I'm planning on doing the half.  I'm not going to race it, and plan on running with a few friends.  If I start to feel pain, I'll just take it easy and just have a good time.


- Dan was away in March.  He had another work trip that ended up being three weeks long, which was exactly when I stopped running.  So, I was just left on my own, not able to do an activity that's been a big part of my life for the past 20 years, and stuck in a freezing cold, gray city.  For a while I would just come home from work and basically fall asleep right away.  I didn't have any motivation for anything (except if I made plans to hang out with friends..otherwise I would just be sleeping).  Yet another reason why I stopped blogging..I just didn't feel great about myself and didn't feel like sharing anything.

Then, one day I decided I was sick of feeling down, and shared 3 goals for the day.  They were simple things- put away my laundry that was washed last week, clean the kitchen that was disgusting and still a mess from a St Patrick's Day party, and go for a swim (which I hadn't done in a few weeks).  I shared my goals, and immediately tackled all 3 within the hour.  Since then, I've been sharing goals every week day, and it really helps me keep motivated and knock off those little annoying things that I keep putting off.

- I've been cross-training like crazy.  Since I couldn't run most of March, I've been doing all sorts of other activities! That is- after I gained 10 pounds (literally) in the matter of weeks.  Once again, wasn't feeling great, so I decided to do something to change my mindset.  I upgraded my ClassPass membership and made more plans with friends to go to new studios.  I also started swimming more, and have eased back into running, so I'm feeling more and more like myself again!

- I also tried out some new breweries.  Duh!  My favorite is definitely Cinderlands.  I heard some mixed reviews when it first opened, but I'm absolutely in love with it.  Not only do they have amazing beers (I ended up getting a small pour of every single one they offer), but they're constantly rotating and trying new varieties.  The food is also INCREDIBLE.  It seems like it should be advertised as a restaurant that also makes its own beer, instead of a brewery that serves food.  It's that good. 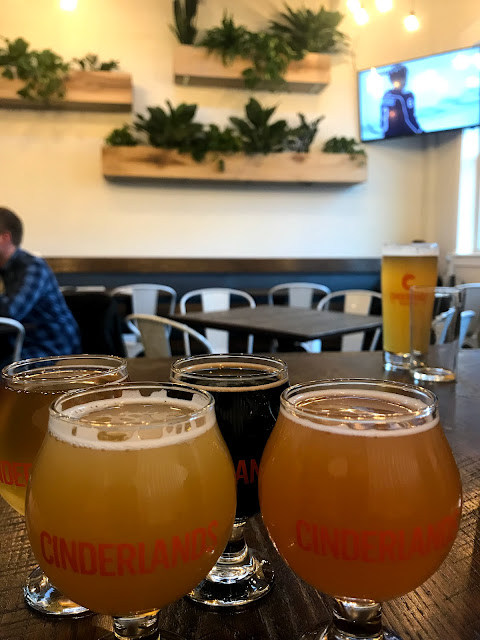 So- that's basically where I've been and why I haven't been blogging in a month.  I have some fun stuff coming up soon, and I'm excited to start talking more about triathlon training and other exercises I've been doing that AREN'T running related!  Maybe I'll even throw in some recipes and house updates (I have a few of those!).

Now your turn!  What happened in your life in March?
Is it snowing where you are?
How do you get out of a funk?
personal