January 16, 2020
After a whirlwind of a trip to Porto (where it felt like we were always on the move), it felt great to head to our next stop- the Douro Valley. Known as the demarcated region where grapes are grown for port wine, I knew this would be the relaxing part of our trip. 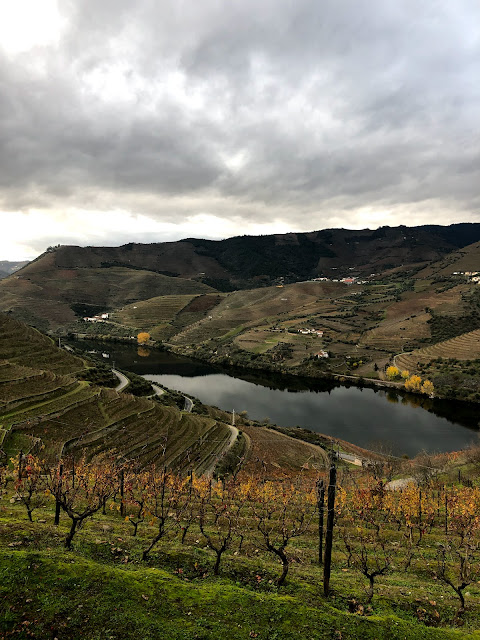 We had one tour scheduled as part of our Groupon package, but other than that we were on our own!

We left Porto around lunchtime, and made our way east to the mountainside. It was really hilly, with small, twisty roads wrapping around the hills and rivers. The drive took about an hour and a half, and then we arrived to our hotel to relax for the rest of the day 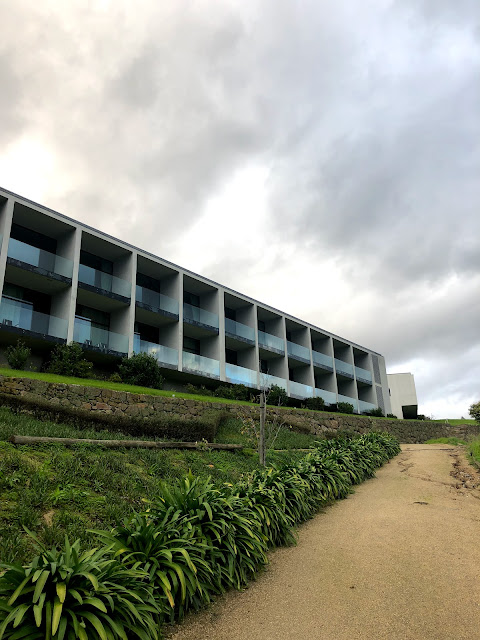 This hotel was absolutely beautiful, with a gorgeous view of the famous Douro River (the same river that we had a boat tour on the previous day). There were a lot of different restaurants and bars all over the property, along with an outdoor pool and spa area. Unfortunately, since we were there in the off season, a lot of these places were closed. We were able to visit one bar and one restaurant, both of which were great! I had some of the most amazing food in the restaurant, and the breakfast buffet was incredible. 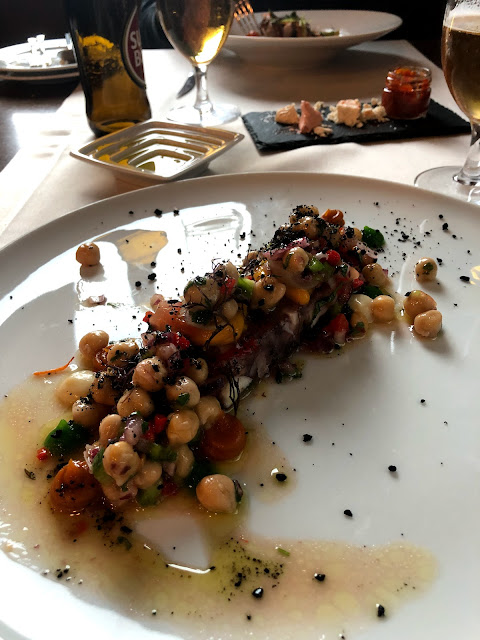 The hotel was right up the road from a train station, so we also took a drive down there to see the river up close. It was so beautiful and relaxing! Just what we needed to recharge after a few busy days. 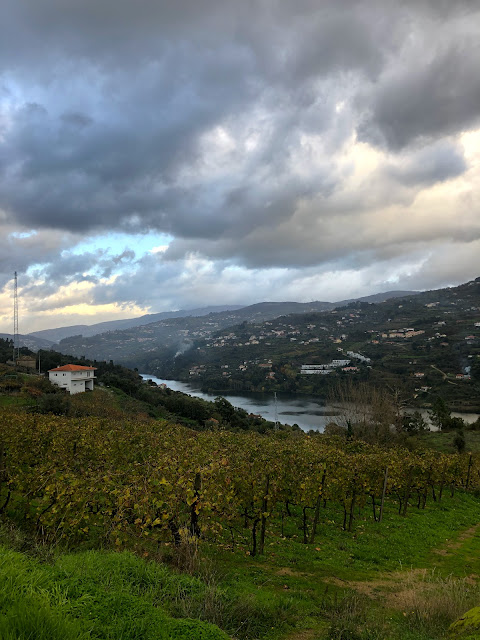 After having a delicious and hearty breakfast, we drove off to our one and only appointment of the day- a tour and tasting at one of the oldest wineries in town. 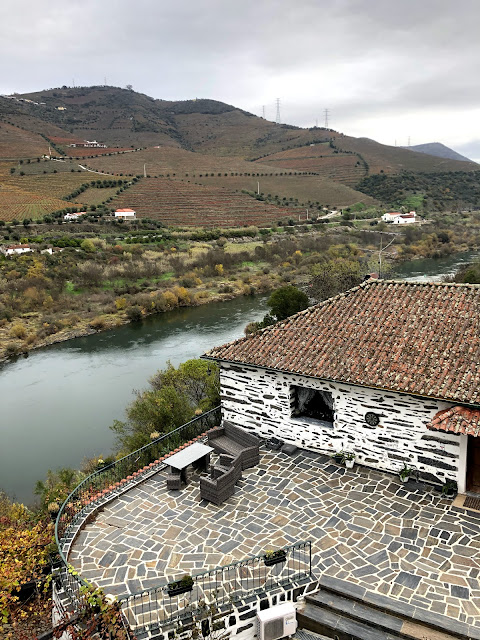 First thing I learned on this trip was that "Quinta" is a wine-producing estate. These estates were situated on both sides of the Douro River, sometimes right at the water and sometimes high atop the hills. Since the hills are so steep, they were terraced to allow the grapes to grow, which gave absolutely stunning views as you were driving around the region. The rows are so narrow that equipment can't fit, so all of the grapes are hand picked and carried down to the machines manually. 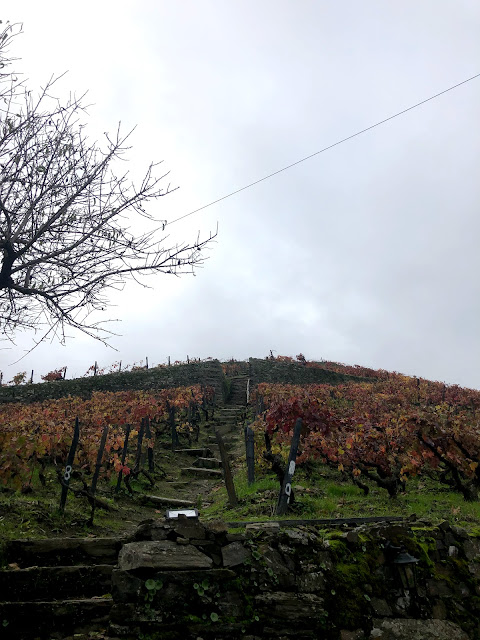 Our first Quinta visit was one of the smaller wineries that has been around for a long time, since 1757! It's stayed in the family, and so much care is taken during the wine making. There are rooms for rent here as well, and I think it would be fun to stay here during wine stomping season! 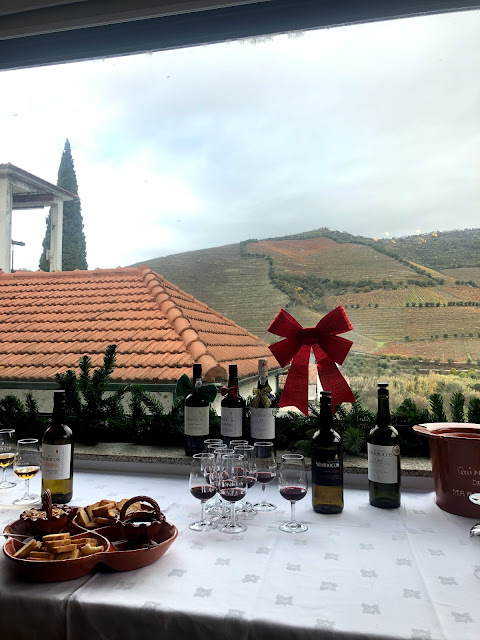 We also had a tasting of a few of their wines and ports. My favorite was Lagrima (tears) which is a white port. Delicious! 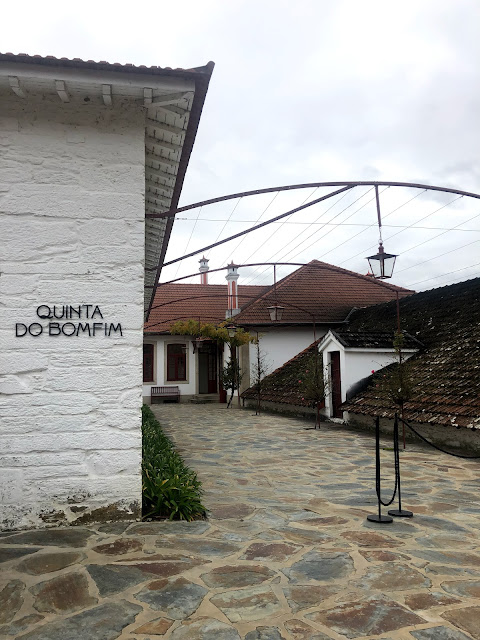 Next up, we drove along the Douro River to the town of Pinhao. The drive was absolutely stunning and has been named one of the prettiest drives in the world! Along the way, we passed signs for tons of different Quintas, but since it was Sunday a lot of them were closed. Luckily, we found a few that were open and made our way to some of them. 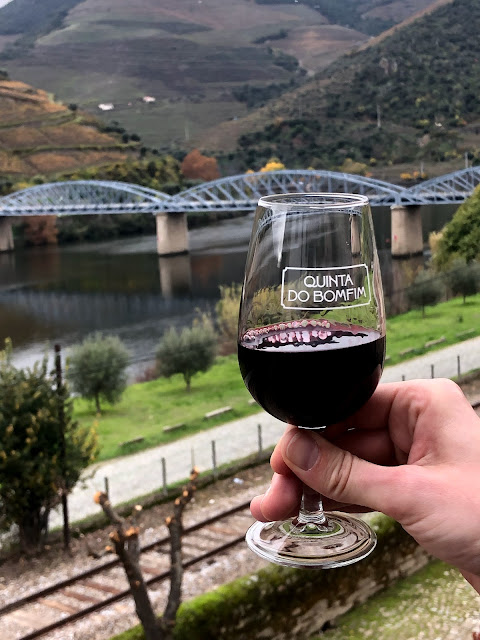 We stopped at Quinta do Bomfim, which had a beautiful location right at the water and had huge terraces overlooking the river. We relaxed there for a while, then followed some of the marked trails that had information about the estate. It was really fun and a great way to stretch our legs after being in the car. 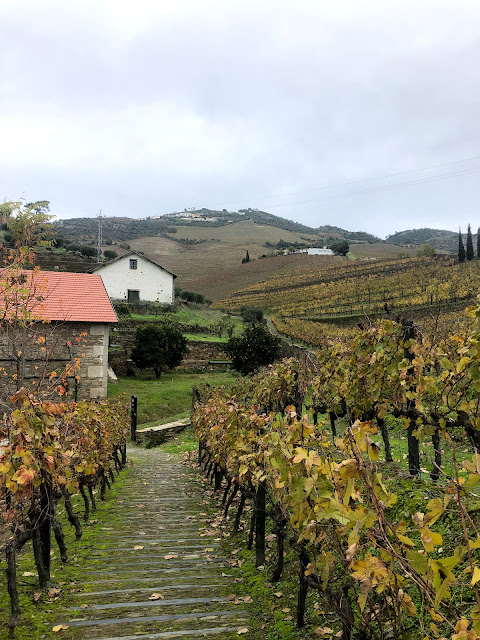 We both got a few ports to try, including my favorite that I tried in Porto- Graham's Six Grapes. The interesting thing about this vineyard was that it grows grapes for Dow's Port, but is owned by a parent company that owns other brands like Graham's and Cockburn's. So, we could try any of those brands while we were here! 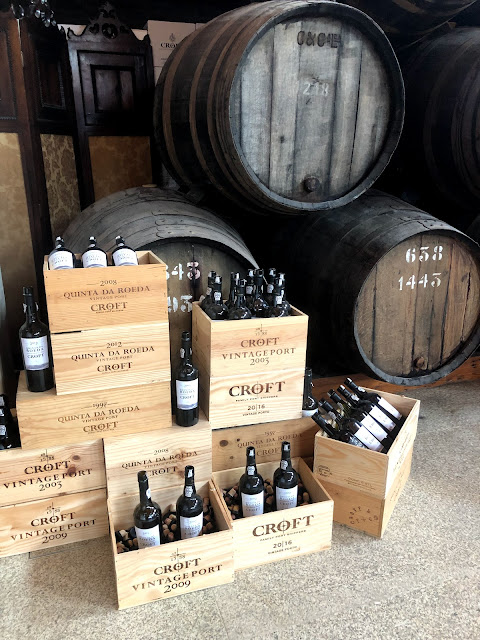 Right down the road was our next spot - Quinta da Roeda. This vineyard grows grapes for Croft, so I opted for a flight here that was suggested by the sommelier. We paired it with a Portugese cheese plate, and enjoyed it in the beautiful terrace that was dripping with vines! I wish I could package that area up and put it in my backyard! It was so beautiful. 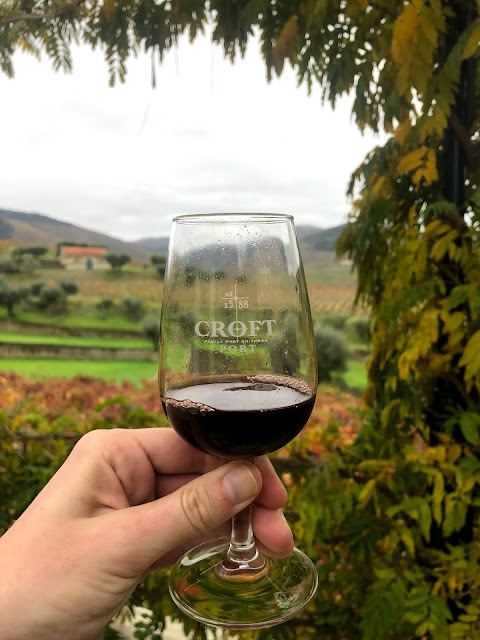 The best port we had all trip (in my opinion) was a Vintage from 2005, which we ended up bringing home. These wines are bottled from one year's harvest that was determined to be a good year by the Port Institute (other ports are blends of different harvests). The port is then bottled, and can be stored as long as possible. It continues to age in the bottle, so patience is a virtue here! Once opened, the port should be drunk within a few days, since this is the first time it's been exposed to air and spoils quickly. 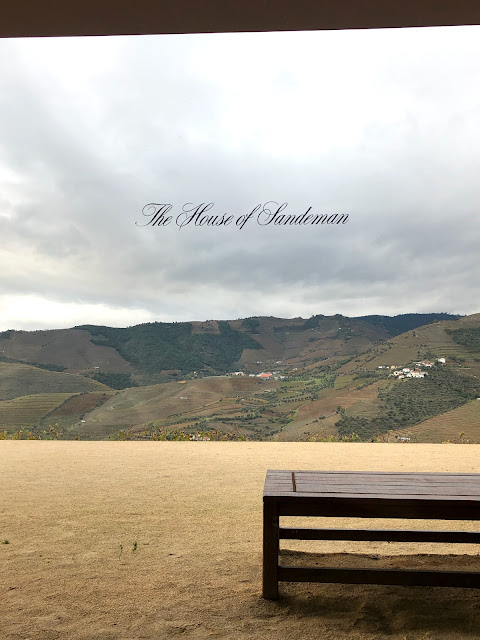 The final vineyard we visited was Quinta do Seixo, which is the famous Sandeman vineyard. This one sat way up at the top of a hill, and had the most gorgeous view of the river. There were also flowery bushes and trees planted all over, so it really felt like you were in a special place. 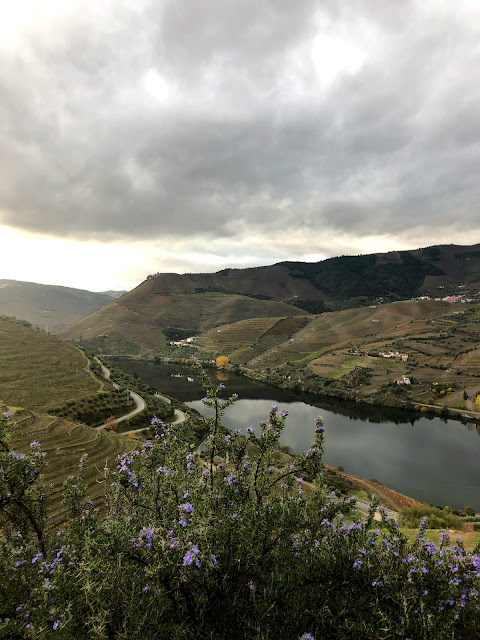 The vineyard offered a lot of tours and guided tastings, but since it was getting late we just did our own tasting! We shared another flight here, and also got some chocolate truffles. The tasting room was in a study-type room with couches and a fireplace, so it felt really cozy and relaxed. Great way to end a fun day! 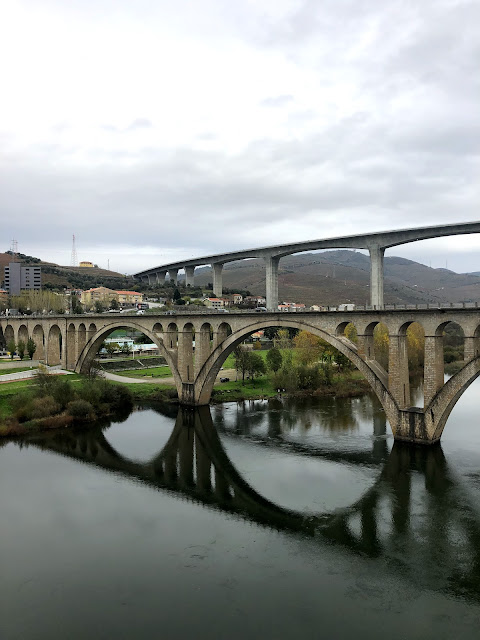 On the drive home, we stopped in the small town of Peso da Regua. This was a really cute area- lots of restaurants, cozy cafes, wine shops, and museums. There was also a nice pedestrian bridge that went across the river with insane views. 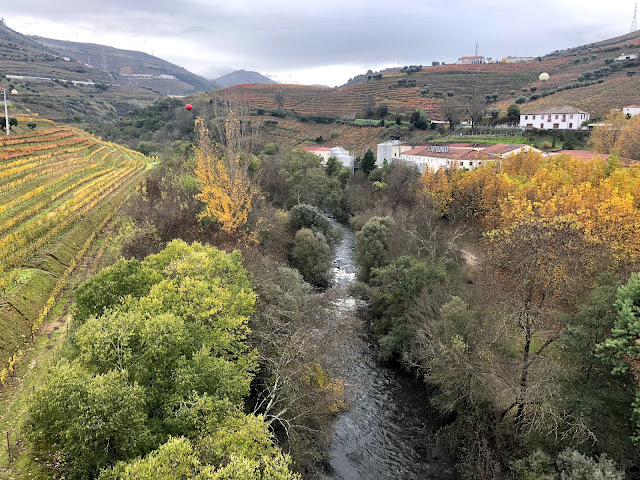 I heard good things about a few restaurants that were housed in an old train station. We walked by them, but unfortunately none of them opened until after 7PM, and at this point it was only about 5:00. (Side note- I noticed most restaurants in Portugal opened much later than what I'm used to back home, but this is pretty common across Europe). 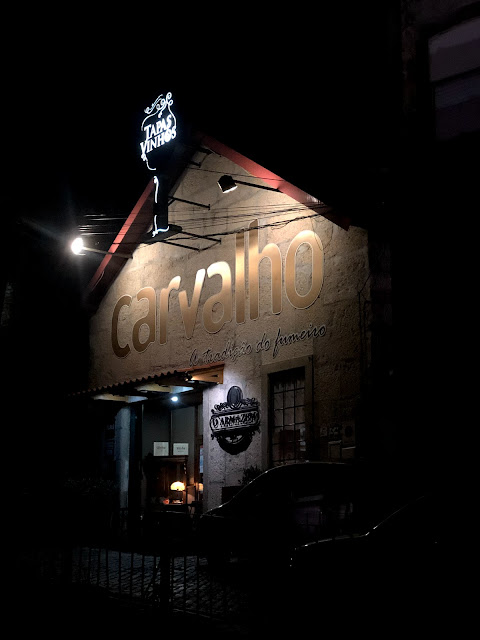 Fortunately, a tapas places across the train tracks was open, so we happily ate there. The chef/owner was a really nice guy who kept giving us special dishes to try. Everything was so good and we left completely stuffed and happy.

After we were done eating, we made our way back to the hotel and passed out almost immediately. We had plans to leave super early (around 5AM!) so it was time to rest and pack up! My next post will cover our next portion of the trip- a magical stopover in the fairytale land of Sintra.
portugal travel