A Long Weekend in Asheville (Part 2)

September 09, 2021
I'm back today with the second part of my Asheville trip! (Catching up? You can find part 1 here!) I was thinking this could be a two part series, but when I started writing about this day I realized I would have to split it up into three. The trip was just too good!
For our second full day, we spent time doing some hiking and exploring downtown Asheville. It was a ton of fun and made me just want to come back sometime soon because there's still SO much we didn't get to do. But without further ado, here's how our day went- 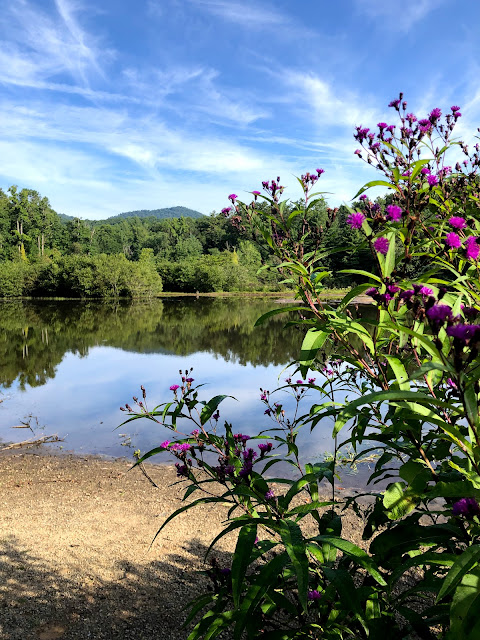 Of course we had to start off our day with a hike! There were so many options to choose from, but I decided on a place that was close to downtown and also free to enter- the Hard Times Loop Trail in Pisgah National Forest. There was a small parking lot at the trailhead, and then we made our way down the trail and towards a small lake. We were able to complete a loop for about a 2 mile hike. 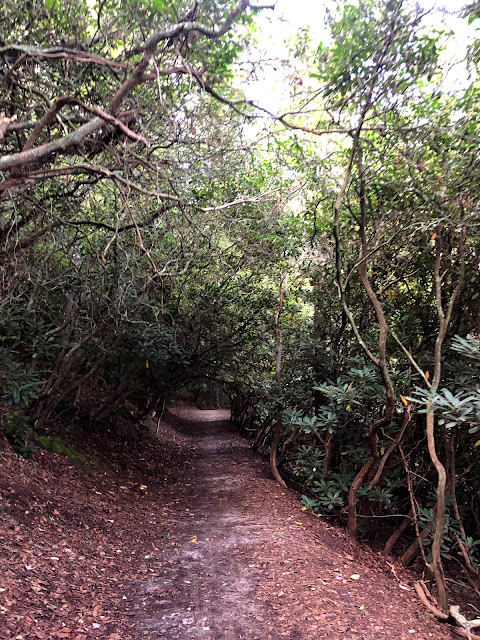 Most of the time we were following a flowing creek, which is one of my favorite relaxing sounds in the world! The lake had a beautiful view of the mountains behind it, and we all enjoyed this hike a lot. It was pretty flat and we saw a lot of other hikers, some running groups, and bikers. 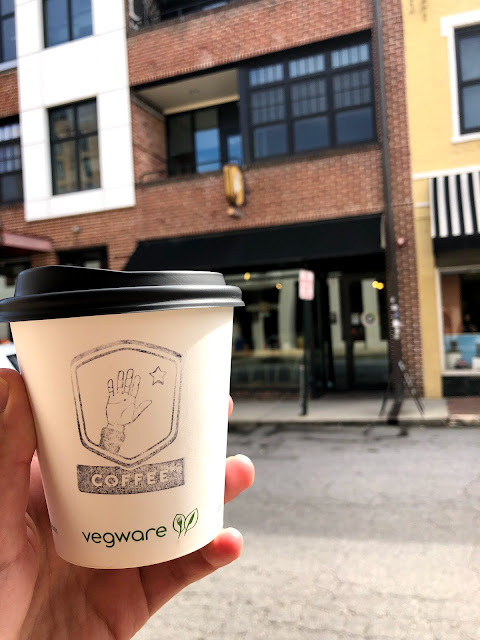 After our hike we headed downtown. We parked on a side street and walked to High Five Coffee for a little pick-me-up. I got a lot of recommendations for this place, and it was really good! I ordered a latte that had all kinds of spices in it and it was delicious! I love drinks that immediately warm you up and this definitely fit the bill. Dan got an iced lavender latte and also enjoyed it. 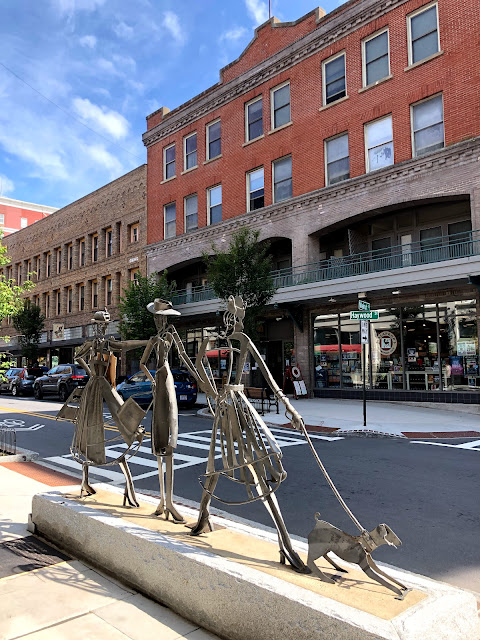 With our coffees in hand and two hours on our parking meter, we set out to explore downtown a bit! We pretty much just walked around and checked out buildings that looked cool. A lot of the buildings had an interesting style and seemed to be stuck in the 1920's. When I got home I looked into the history a bit and discovered that the city was really up and coming in the 20's and then was hit very hard by the Great Depression. Asheville actually had the highest per capita debt in the nation. The city slowly paid back these debts, but most buildings remained untouched or unfinished and now has one of the best collections of Art Deco architecture in the country! 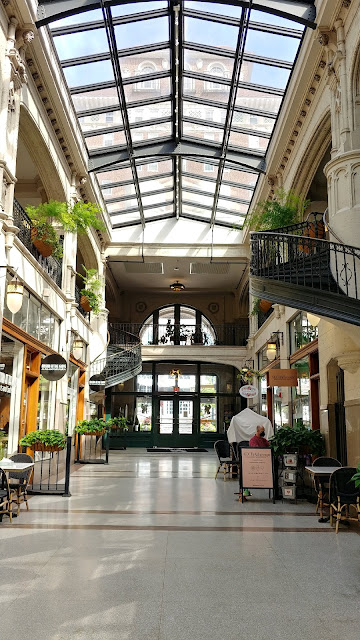 One of my favorite buildings was the Grove Arcade, which was one of the first indoor shopping malls in the country. It was meant to be the base of a skyscraper that never got built, and now it's filled with interesting shops like a gem store and used book store/champagne bar. Another favorite was Woolworth Walk, which is a fun gallery space and also features an old fashioned soda fountain. 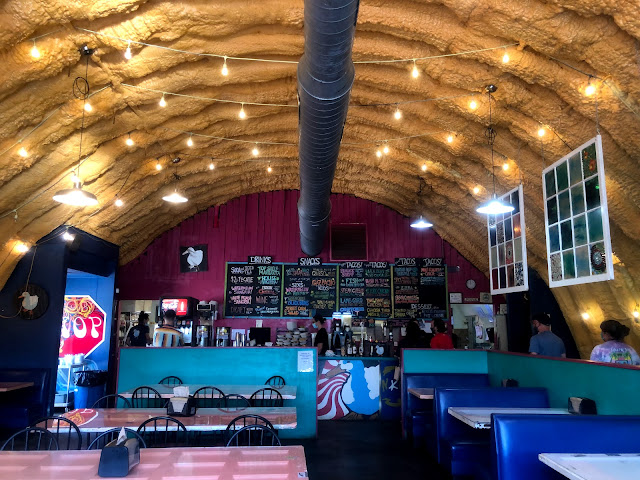 I was super excited to try this famous taco shop, which has an ever-changing menu (even as we were there the menu changed a few times!) full of inventive flavors and combinations. We ordered six tacos along with a salsa trio and ate outside on picnic benches overlooking the French Broad River. 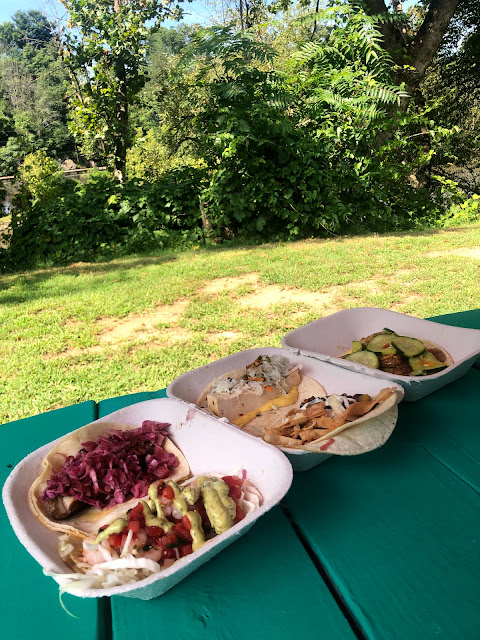 (Not the most appetizing photo, but I swear they were all better tasting than they looked). All of the tacos were amazing, but I was especially wowed by the bahn mi tofu and Tokyo tuna. Both were so full of flavor and completely satisfying. 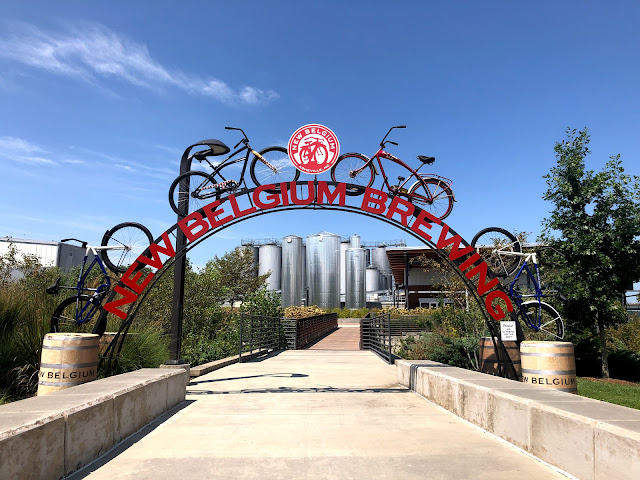 Once we were sufficiently taco'ed up, we crossed the river to make it to New Belgium Brewing. This is one of the major breweries that has a location in Asheville (the other being Sierra Nevada) and a lot of people recommended we stop by. The location was really great- there are tons of different areas outside to sit and relax. We opted for the patio which overlooks the river and a bike path, so you can see people out enjoying a float or bike ride. 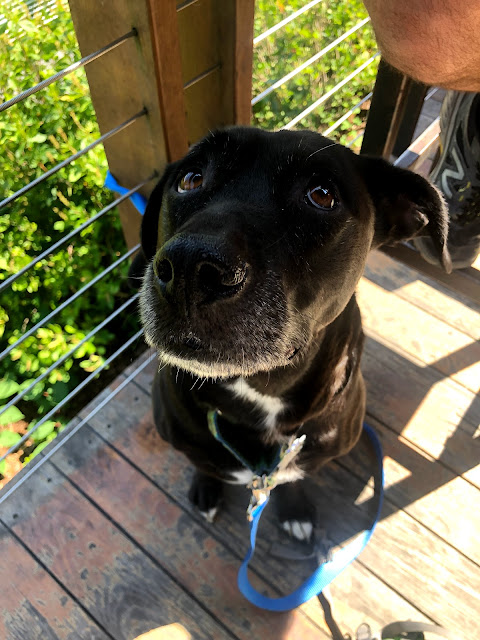 Unfortunately I wasn't a huge fan of the brewery itself. There were about 20 beers on draft- most of which seemed to be experimental sour beers. There were no descriptions of the beers so I ended up asking the bartender what a handful of them were until I felt bad about asking so many questions and ended up just getting their hazy IPA. Because they're still following COVID guidelines, there are no flights available which I think would have made me like the brewery a bit better, but I didn't like any of the sours I tasted enough for a full pint. I did enjoy the hazy though but was personally hoping their atomic pumpkin would be on draft... 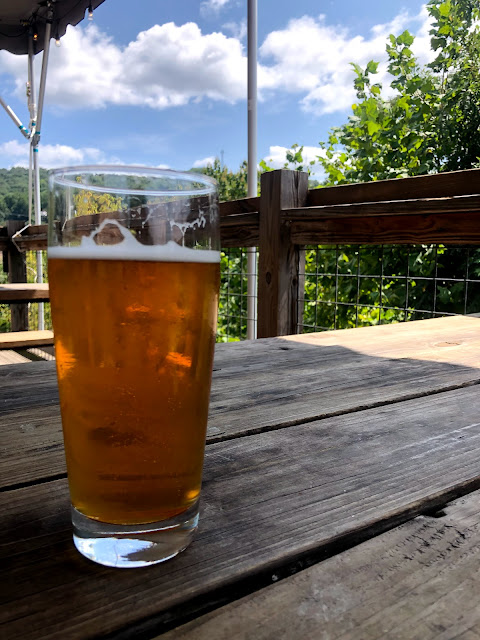 Next up we drove through the River Arts District (which is full of art galleries and studio spaces) to get to Burial Brewing. This whole area was really cool and was full of neat looking restaurants and breweries. Parking was a bit tight, so if you visit just grab the first spot you find because you might not find another! 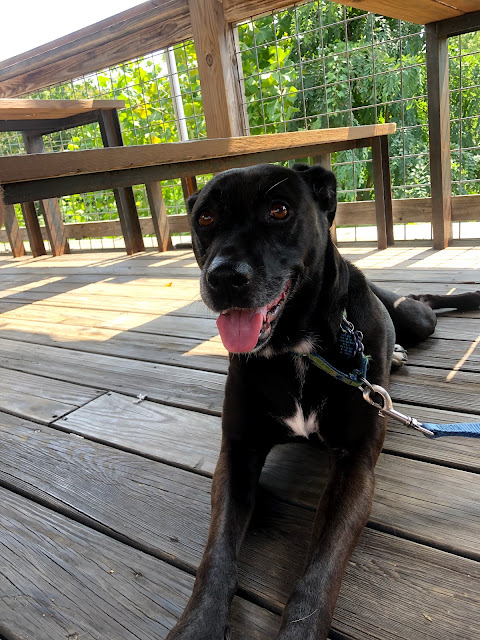 I really enjoyed the festbier that I got at Burial, and enjoyed the chill outdoor seating. We started out in the beer garden before discovering a rooftop bar that was surprisingly empty. Selma was also a huge fan- as soon as we made our way up there she promptly fell asleep and did not move until we got up to leave! For context, she is usually very antsy when we are out and never likes to sit still. I've never seen her fall asleep so she must have really liked this place! 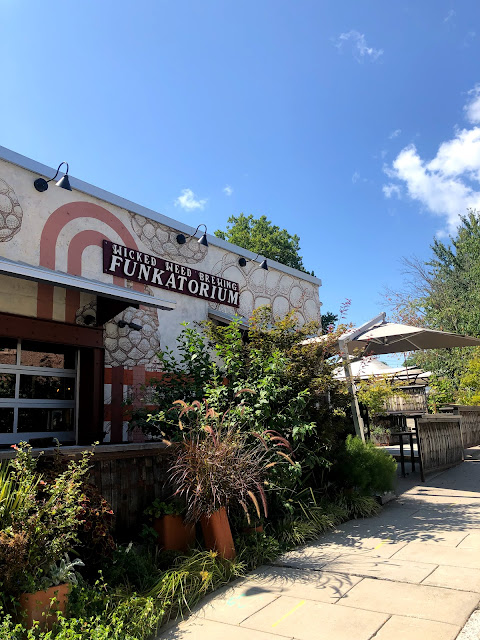 We saved our best brewery stop of the day for last! The Funkatorium is a side project of Wicked Weed Brewing and is the east coast's first taproom devoted to sour and funky beers. The location was gorgeous- as you can see it's covered in plants and felt like we were in a secret garden! The interesting thing about this brewery was that they have table service, so we were seated and had a waitress to take our order and give suggestions on beers to try. 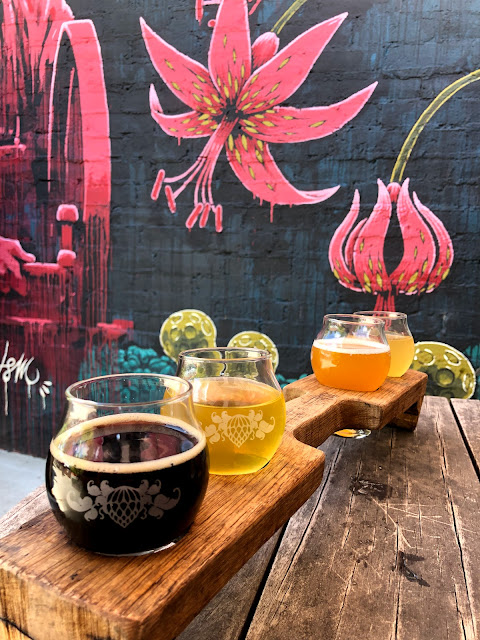 One aspect that made this my favorite of the day was all of the pre-made flights that were available. They each had a different theme and there were lots of fun options to choose from. I went for one called the Roulette Mixed Flight, which was a mix of barrel-aged beers. This included an oak fermented cider; foeder pear; mango, guava, pineapple and papaya aged in white wine barrels; and cherry sour aged in bourbon barrels. Each of them had such a unique and fantastic flavor and made me want to try the entire menu.

We headed back to the cabin to rest up a bit and drop off Selma after we were all finished with our beers. She did a great job spending the entire day outside but was definitely ready for a nap in the air conditioning! I was again blown away with how dog friendly every place was, so I would definitely recommend Asheville for a vacation if you want to go on a trip with your dog.
Once we were rested up, Dan and I headed back to the city and headed straight for Pritchard Park. I heard that on Fridays people gather for a drum circle but didn't know what to expect. There was a pretty large crowd, full of a mix of people with different instruments and a few dancers in the middle. It was such a cool experience to see people of different ethnicities, ages, and styles being united my music- truly a melting pot! We stopped by a few other times and the crowd kept getting bigger and bigger and the music kept changing. It was a really interesting and unique experience. 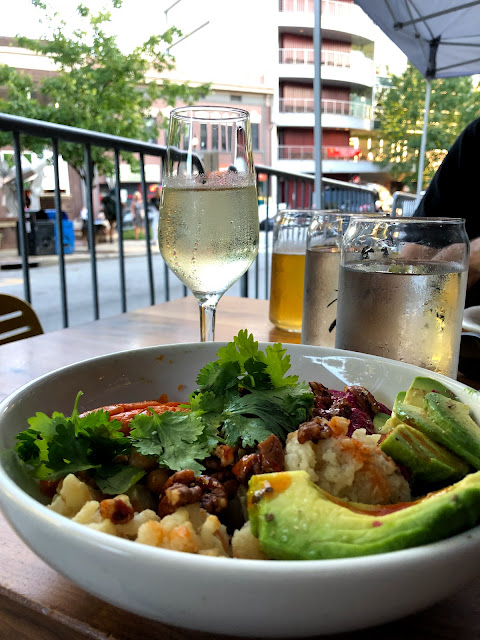 For dinner we went to a restaurant that overlooks the park and got outdoor seating so we could hear the drum circle in the background and people watch while we ate! I wanted something light so I ordered a veggie bowl and roasted brussels sprouts that really hit the spot.

That wraps up part 2 of my Asheville trip! I still have one more to go which includes two of the best hikes I've ever been on and a visit to the cutest little town.