We're officially on the tailend of summer. In some ways I feel like a kid on summer vacation-moving to a new state (especially one that I've dreamed of living in for a lot of my life) still hasn't really sunk in and feels temporary. I think once the weather cools down, the leaves change, and the heat has to be turned on it might finally sink in that this is home. And now- we're one step closer! 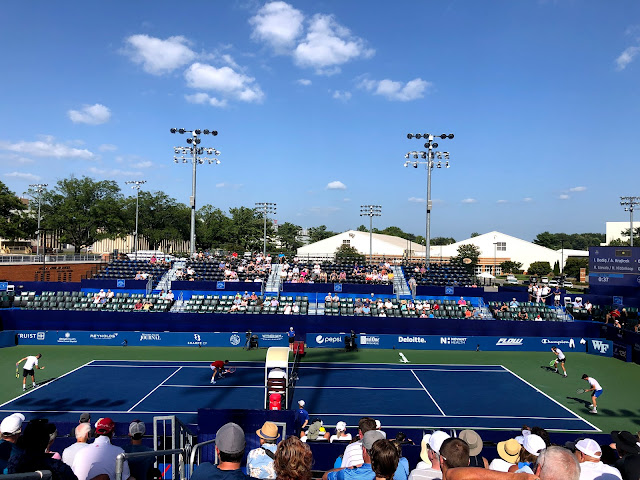 August was a really fun and busy month, filled with tons of events and spending time with new friends. It's really hard to pick just one highlight, since every day seemed to bring a new adventure. Visiting Winston Salem and going to my first tennis tournament in two and a half years was definitely one of the best moments of the year for me! It was my first live sporting event since the pandemic started (my last one was actually a Caveliers game right before the world started to shut down), and even though things were very different, it almost felt normal.

Visit all the Parks in Apex 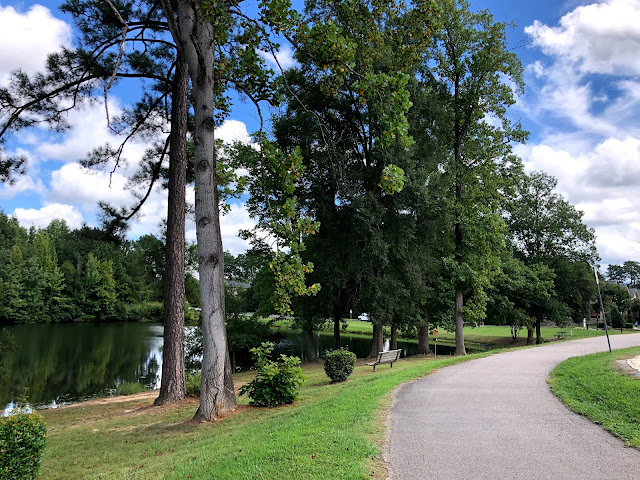 I finished this off pretty early in the month and wrote up a post about all of the parks in Apex. I loved this challenge because it got me to explore a lot more, and I discovered some really great parks- hidden gems like Seagrove Farms Neighborhood Park as well as fun running routes like the Kelly Park - Jaycee Park greenway.

This one didn't go exactly as expected, but I can cross this off. I tried an outdoor yoga Meetup at a local park which was nice, but didn't have the social aspect that I was hoping for. I signed up for a few more that ended up getting cancelled at the last minute. Yesterday I went to my first "Spanish Conversation for Beginners" MeetUp at a local coffee shop, which was again more instructional than social, but was a great way to practice speaking Spanish with others! I want to keep going (maybe even trying the Intermediate one next) to help improve and get in the habit of speaking it more often. Next month I signed up for a few more in the hopes of making more friends!

Done! I found all new doctors, and have a few appointments set up. There were some that I had right before moving, so I'll have to wait until next year to actually make them, but at least I'm in the system now so it should (hopefully) be easy and painless from here on!

Paint n' Picnic Once a Week 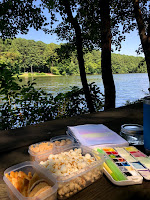 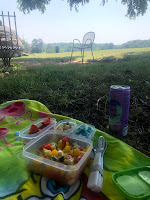 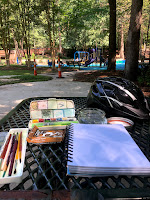 I think this was one of my favorite challenges that I've made for myself in a while. I only managed to go out three times this month, but it was such a fun experience! I want to keep this up for sure- having an outdoor picnic is something that I always want to do but before now have never actually done it.
And now here are my goals for September-

I have been so lazy about biking, which was one of the things I was most excited to do more of when I moved here. I've been going about once a week (or less) so in September I really want to make it a habit of going out more often. As a side goal, I would love to make it more of a habit to bike to a location (like a coffee shop or brewery) which is always more fun than driving!

Going along with biking, I have been so lazy about kayaking and paddleboarding! I love going so much, but always make excuses not to go. I want to visit as many lakes as possible to figure out which ones are my favorites, so I'll make it a goal to visit two new ones in September. No excuses!!

Register for A Race (and start training)

I've mentioned a few times that I'm finally ready to race again! It's been a while, but I'm starting to get that itch back. I have a few in mind that I want to do, so I need to register and pick out a training plan..as well as start running longer to build a good base.
What are your goals this month?
goal