Happy September everyone! Last month was another great one for reading for me. It was a perfect storm of having a bunch of great books in my reading queue, as well as perfect weather for reading outside. I had a pretty decent mix of genres- some thriller, sci-fi, and romance. Here's what I read-

Lock Every Door by Riley Sager

No visitors. No nights spent away from the apartment. No disturbing the other residents, all of whom are rich or famous or both. These are the only rules for Jules Larsen's new job as an apartment sitter at the Bartholomew, one of Manhattan's most high-profile and mysterious buildings. Recently heartbroken and just plain broke, Jules is taken in by the splendor of her surroundings and accepts the terms, ready to leave her past life behind.
As she gets to know the residents and staff of the Bartholomew, Jules finds herself drawn to fellow apartment sitter Ingrid, who comfortingly, disturbingly reminds her of the sister she lost eight years ago. When Ingrid confides that the Bartholomew is not what it seems and the dark history hidden beneath its gleaming facade is starting to frighten her, Jules brushes it off as a harmless ghost story—until the next day, when Ingrid disappears.
Searching for the truth about Ingrid's disappearance, Jules digs deeper into the Bartholomew's dark past and into the secrets kept within its walls. Her discovery that Ingrid is not the first apartment sitter to go missing at the Bartholomew pits Jules against the clock as she races to unmask a killer, expose the building's hidden past, and escape the Bartholomew before her temporary status becomes permanent. 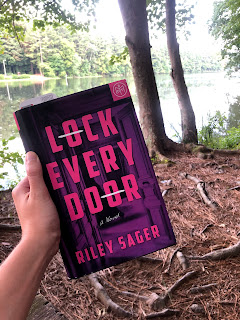 This book is so, so good! A friend at run club lent it to me (an actual- hard cover book which is not the norm for me lately) and I absolutely devoured it. Great writing, interesting characters, enough suspense to keep you turning the pages, and an unexpected twist. I usually can't handle scary books but this was just on the cusp of being thrilling but not too intense. Highly recommend!
My Rating - 4.5/5

The Girl in the Mirror by Rose Carlyle

Twin sisters Iris and Summer are startlingly alike, but beyond what the eye can see lies a darkness that sets them apart. Cynical and insecure, Iris has long been envious of Summer’s seemingly never-ending good fortune, including her perfect husband Adam.
Called to Thailand to help her sister sail the family yacht to the Seychelles, Iris nurtures her own secret hopes for what might happen on the journey. But when she unexpectedly finds herself alone in the middle of the Indian Ocean, everything changes. When she makes it to land, Iris allows herself to be swept up by Adam, who assumes that she is Summer.
Iris recklessly goes along with his mistake. Not only does she finally have the golden life she’s always envied, with her sister gone, she’s one step closer to the hundred-million-dollar inheritance left by her manipulative father. All Iris has to do is be the first of his seven children to produce an heir.
Iris’s “new” life lurches between glamorous dream and paranoid nightmare. On the edge of being exposed, how far will she go to ensure no one discovers the truth? And just what did happen to Summer on the yacht? Only Iris knows . . . 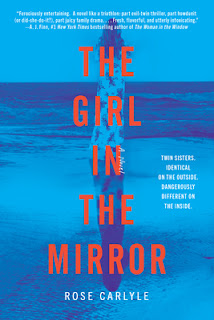 All I can say about this book is OMG and WTF. Such a unique premise and always left you wondering what would happen next, what secrets from the past would be revealed, and who would win the ultimate "prize" at the end of the father's estate. Some parts were predictable but was still fun getting to those parts with even more twists thrown in that I didn't see coming. Loved!
My Rating - 4/5

Ryland Grace is the sole survivor on a desperate, last-chance mission--and if he fails, humanity and the earth itself will perish.
Except that right now, he doesn't know that. He can't even remember his own name, let alone the nature of his assignment or how to complete it. All he knows is that he's been asleep for a very, very long time. And he's just been awakened to find himself millions of miles from home, with nothing but two corpses for company.
His crew mates dead, his memories fuzzily returning, he realizes that an impossible task now confronts him. Alone on this tiny ship that's been cobbled together by every government and space agency on the planet and hurled into the depths of space, it's up to him to conquer an extinction-level threat to our species.
And thanks to an unexpected ally, he just might have a chance. 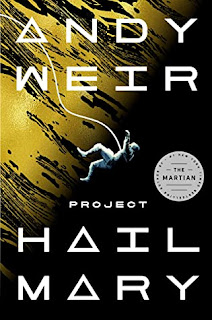 What a great, entertaining read! I'm not usually a fan of sci/fi but everything was dumbed down so much and explained in such an easy to understand way (plus I loved how Grace nerded out on science the entire time) that I could actually get some of it and enjoy the book. Sometimes the author went too in-depth for me so I skimmed those parts, but wow what a book and interesting story line. Where can I find my own Rocky because I'm pretty sure he's my favorite character in any book ever!?
My Rating - 4/5

Maybe Not by Colleen Hoover

When Warren has the opportunity to live with a female roommate, he instantly agrees. It could be an exciting change.
Or maybe not.
Especially when that roommate is the cold and seemingly calculating Bridgette. Tensions run high and tempers flare as the two can hardly stand to be in the same room together. But Warren has a theory about Bridgette: anyone who can hate with that much passion should also have the capability to love with that much passion. And he wants to be the one to test this theory.
Will Bridgette find it in herself to warm her heart to Warren and finally learn to love? Maybe.
Maybe not. 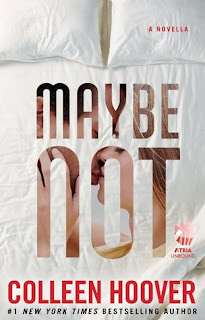 Very fast and quick novella that I finished in less than a day. Follow up to another Colleen Hoover book and I got the same weird feeling about the characters as I did in that one- they all seem to be in very unhealthy relationships that are so toxic it makes me feel uncomfortable. This one was even worse and it kind made me not enjoy the book as much as I wanted.
My Rating - 2/5

Get a Life, Chloe Brown by Talia Hibbert

Chloe Brown is a chronically ill computer geek with a goal, a plan, and a list. After almost—but not quite—dying, she’s come up with seven directives to help her “Get a Life”, and she’s already completed the first: finally moving out of her glamorous family’s mansion. The next items?
• Enjoy a drunken night out.
• Ride a motorcycle.
• Go camping.
• Have meaningless but thoroughly enjoyable sex.
• Travel the world with nothing but hand luggage.
• And... do something bad.
But it’s not easy being bad, even when you’ve written step-by-step guidelines on how to do it correctly. What Chloe needs is a teacher, and she knows just the man for the job.
Redford ‘Red’ Morgan is a handyman with tattoos, a motorcycle, and more sex appeal than ten-thousand Hollywood heartthrobs. He’s also an artist who paints at night and hides his work in the light of day, which Chloe knows because she spies on him occasionally. Just the teeniest, tiniest bit.
But when she enlists Red in her mission to rebel, she learns things about him that no spy session could teach her. Like why he clearly resents Chloe’s wealthy background. And why he never shows his art to anyone. And what really lies beneath his rough exterior… 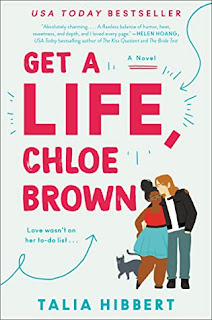 This series is just the best. The characters, the chemistry, the obstacles, the dialogue are all off the charts amazing. So enjoyable to read and always offers up something new that I didn't expect from a rom-com! Lots of different topics were introduced with these characters, from chronic illness to abusive relationships and triggers. Somehow she handles all of these tough topics with ease and respect, but also makes them work in a rom-com scenario. Loved and can't wait to read more from Talia.
What did you read this month?
linking up with Steph & Jana to show my books!
books