Fall-ing in Love with Fall

Happy October everyone! It's definitely starting to feel more "fally" in North Carolina, and the weather has been absolutely perfect in my opinion. Give me chilly mornings and sunny afternoons every day! Last week was full of outdoor adventures, a fun night out, and spending time with some new friends. Here are some highlights! 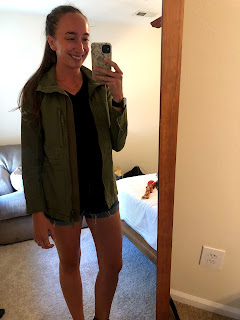 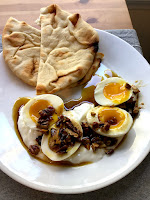 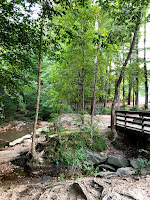 Plans for the day (outside of work): Dan and I met up with some people for disc golf! This was a MeetUp that I was really excited to join for a while and it ended up being a blast. I also stopped at the library to pick up my first Book Club book, and watched Dancing with the Stars when I got home.

One thing that went unexpected: I had really bad sleep all weekend and again last night and woke up feeling awful, so I took a half day off work. I still have so many sick days to use by the end of the year and just resting a bit in the morning made me feel so much better!

Best part of the day: The park where we played disc golf was really gorgeous! It's right by NC State's campus and was full of trees and creeks (which made playing more difficult but I enjoyed walking around).

What I wore: jean shorts and black tee from Target, Madewell jacket

Best thing I ate: I borrowed a few cookbooks from the library and tried out some recipes from Molly Baz's Cook This Book which were good- a jammy egg with browned butter sauce, and Caesar potato salad. 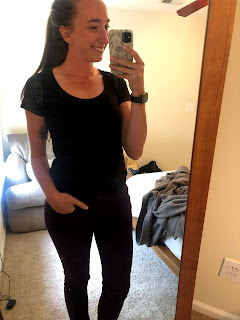 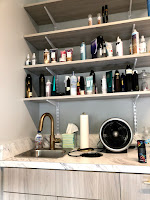 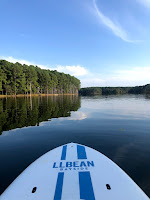 Plans for the day (outside of work): At lunchtime I went on a hike with Dan and Selma, and then had a (long-awaited) haircut after work! It was a beautiful day out so I headed to Jordan Lake for a paddle after the haircut.

One thing that went unexpected: The person who I was scheduled to cut my hair was running behind so I ended up getting someone different and I absolutely loved her! It was my first time trying this salon (Maeve Salon and Color Bar in Apex) - and to be honest my first non- Great Clips hair cut in 10 years. Tristan was really great and friendly and I'll definitely be back when I need another cut.

Best part of the day: John Quiñones from "What Would You Do" and ABC News did a presentation at work today for Hispanic Heritage Month and it was amazing. He had so many great stories and was a terrific story teller, but also talked a lot about microaggressions and the importance of speaking up for others and not just being a bystander. He also shared a quote by Martin Luther King Jr that really stuck with me- Take the first step in faith. You don't have to see the whole staircase, just take the first step. I loved that!
What I wore: H&M plum jeans, Stylemint shirt

Best thing I ate: Another recipe from my cookbook- for lunch I made tomato toast and it was incredible. I'll be sharing my thoughts on all the recipes I'm trying in an upcoming post so I won't share too much now but WOW. 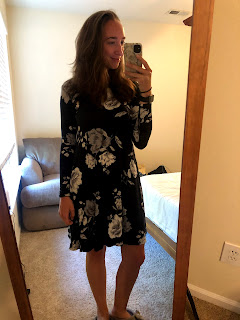 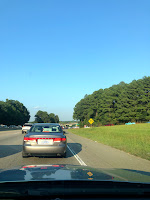 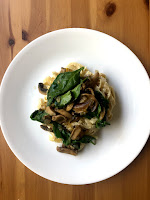 Plans for the day (outside of work): You already know...Wednesday = RUN CLUB! I ran 5 miles with my friend Tiffany, stayed for a while to socialize with everyone, then made it home just in time for the end of Survivor and season finale of Big Brother.

One thing that went unexpected: Traffic was really bad on the way to Run Club (it usually takes about 25 minutes but it was over an hour) because of some terrible accidents. I started my run later than usual but got to see a gorgeous sunset. On the drive home they were still out there repairing a barrier that a truck drove through...scary stuff and I hope the driver is ok.

Best part of the day: Having a really, really good run. Our usual greenway was closed off so we did a different route that was super hilly, but our pace was amazing and I felt strong the entire time.

What I wore: Old Navy dress

Best thing I ate: Pasta that was packed with tons of mushrooms and a creamy vegan sauce from another cookbook I'm trying out. I love new cookbooks because it inspires me to cook way more instead of just scrounging together leftovers. 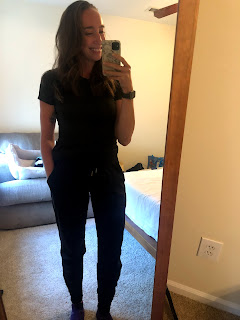 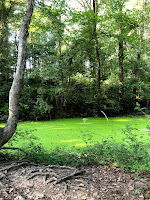 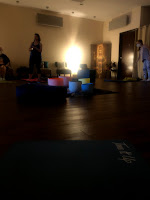 Plans for the day (outside of work): I tried out a Sound Bath for the first time! It was a really cool experience- basically a guided meditation with different sound waves (made by gongs, bowls, and more objects). When it was over I felt like I just had the most amazing massage- my entire body felt loose and relaxed. It was pretty crazy.

One thing that went unexpected: I visited a new park for a run before the Sound Bath and it was really nice! It felt like I was out in the middle of nowhere even though I was just a few miles away from my town.

Best part of the day: I had a few catch-up sessions with some of my coworkers today. I miss seeing all of them in person and lately we've all been so busy, so it was nice to just spend some time catching up. I also scheduled a virtual happy hour for our team next week (remember when those happened all the time at the start of the pandemic?!)

Best thing I ate: Jackfruit "chicken" caesar salad. Another winner from the cookbook I borrowed. 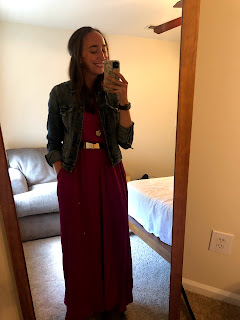 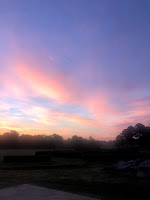 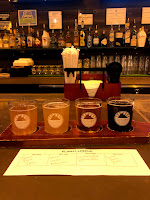 Plans for the day (outside of work): I started my day in the best way possible- a sunrise yoga class at the Art Museum taught by my friend Erica. After work Dan and I headed downtown for a fun night out- started with pumpkin beer flights at Flying Saucer, dinner at the oyster counter at 42nd Street Oyster Bar, more beers at Clouds Brewing, and ice cream to finish the night at Two Roosters.

One thing that went unexpected: Our entire night was unplanned and unexpected, but my favorite part was sitting at the oyster counter (we had to sit there since we didn't have reservations..and now I'm never going to make reservations!) We got to see the workers shucking oysters and bustling about- it felt like we were right in the middle of the action and it was so cool.

Best part of the day: Every part of today was great!

Best thing I ate: Oysters!! They're one of my favorite foods to get out- I love the entire experience of ordering them and eating them. It's a rare treat to get them so I always savor it.