Hello everyone! I'm here today to recap one of the best race experiences that I've ever had (spoiler alert?). I think one reason why it was so amazing was that I went in extremely nervous, not sure if I would even be able to finish the swim, and ended up exceeding my expectations and doing what I think is a great job!  Here's a quick run-down of the race and some thoughts on the event if you're looking for a sprint to do next year. 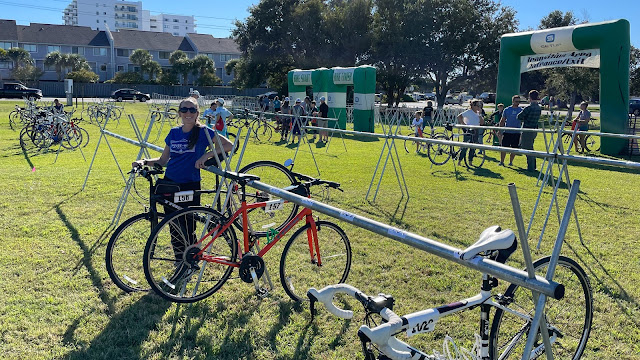 Dan and I got to Wrightsville Beach on Friday morning and headed to packet pickup. We decided to move to the Novice division (we signed up for the Age Group category and then realized that would put us towards the front of the pack when we really belonged in the back!). We got color-coded swim caps to make sure we started in the correct group, as well as numbers for our run and bike portions.

After getting our packets we dropped off our bikes in the transition area and checked out the swim start and finish. It looked SO far and I started to get even more in my head about the swim, but then I tried to remember that I'm used to seeing pool lengths and this was just a bunch of pool lengths laid out in a row. Plus- it was an absolutely gorgeous area, so even if I struggled I could just take in the sights!

We got to the park at 5:30 on race day and set up our transition areas. I tried to keep mine pretty basic- I read tips about transition and found that simple is best. I tried to think in terms of grabbing things quickly and in the correct order- like putting my socks in each shoe, having the helmet open and facing the right way so I could just grab it and put it on as fast as possible, practicing getting my bike on and off the rack, etc. Before I knew it, it was time to walk down to the race start! 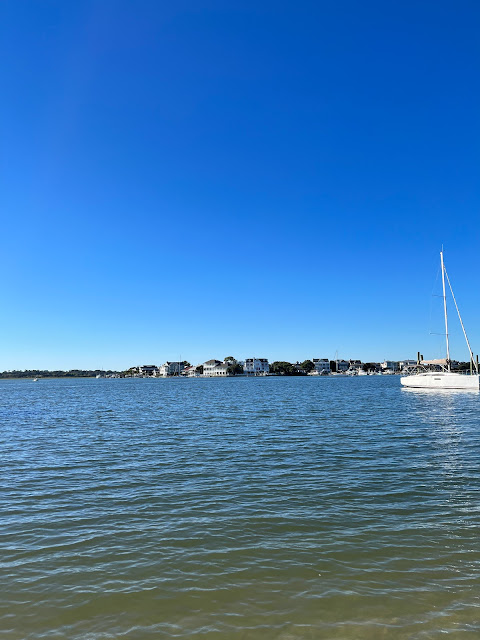 This was the part I was dreading the most, so I was really happy it was the first leg of the race! The swim was 1,350 yards, which is really long for a sprint (they're usually between 500 and 750 yards). But- we swim in a channel and goes with an incoming tide. The race announcer started to call up different groups every 3 minutes, and the novice women were the very last to go! Even though it was a chilly morning (in the low 60s) the water temperature was 78 so it felt AMAZING! It was also extremely buoyant since it was salt water, so just waiting around I felt a lot better than I expected. 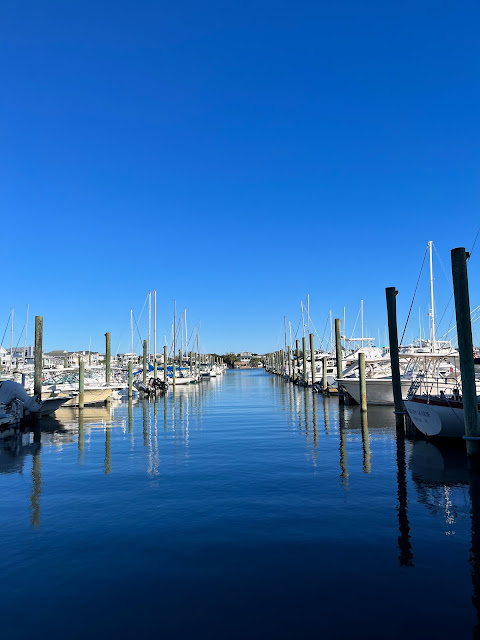 The race went off, and immediately everyone started to kick like crazy and I was getting so much salt water in my mouth and was feeling really overwhelmed. I never went swimming with other people so just all the chaos was throwing me off even though I tried to mentally prepare for it. I hung back a lot and just kind of doggy paddled until there weren't any people around me, and told myself to just try to swim my best and to not give up yet. I did a few strokes of freestyle, and felt like I was gliding along and in a groove immediately! That really helped to settle me down, so I just made it my goal to make it to the first buoy I could see without stopping. Once I made it there, I did a few side strokes to mentally check-in and tell myself to make it to the next buoy. Before long, I could see the finish line and ended up not having to take any breaks and was SO proud of myself and also relieved to have the swim over with.
Swim time: 28:34 (2:06 / 100 yard pace)

We had to climb a little wooden ladder to get out of the water, then run about 1/4 of a mile to the transition area. When I was getting out I saw one of my friends getting out at the same time, which was a huge lift to me! We cheered a bit then ran barefoot (which was honestly the worst part of the entire race!). I got to my bike, dried off as much as possible (mostly just my feet and hands), put on my helmet and sunglasses, then my socks and shoes, and took a Honey Stinger energy gummy and more water. I headed out for my bike and was off to leg 2 of the race!
T1 time: 4:51 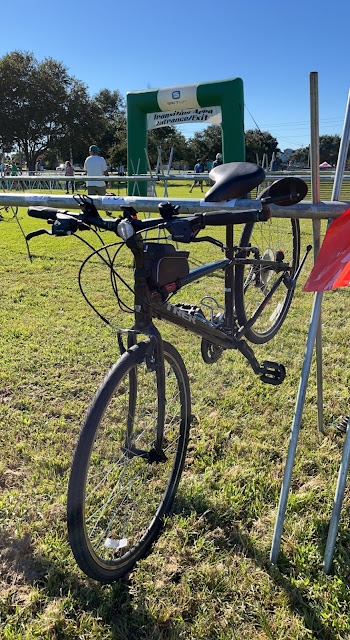 The bike course consisted of two loops on main roads and was extremely flat. I only changed gears a few times but mostly was able just push the entire time in a higher gear. I recently got new tires that were much skinnier than my last ones, so I immediately felt so fast! I passed a bunch of people on the bike and also got passed by just as many, but for the most part I was completely alone for most of this part. I talked to myself a lot during the ride to keep myself mentally checked in- a lot of motivational phrases and reminding myself of all my hard training. I also tried to take in the beautiful sights around me (at least for the first half- we went through some marshy areas and golf courses. Second half was just a busy road full of businesses so it wasn't so pretty).
Before I knew it the bike was done! My original goal was to break an hour, with a stretch goal of breaking 50:00, so I was so happy with my time.
Bike time: 45:39 (15.12 MPH pace)

I ran through the transition area and stopped very briefly to add on my racing number (which I put on my Spi-belt so I wouldn't have to worry about pinning it on my suit), put on a hat, and grab a Honey Stinger gel. This was a really quick stop since I didn't have to change any shoes or dry off!
T2 time: 1:13

We were finally in the last leg, which I thought would be the easiest for me! Running is second nature to me by this point, so I thought I would crush this. But- as soon as I started I knew this would be the hardest part! My legs felt so dead from pushing on the bike, and I also had a lot of numbness in my feet and hands (probably because I didn't get out of the saddle at all and was locked in the same position for nearly an hour!).
The course was a big loop with one out-and-back section at the start. At the turnaround, I saw Dan (who started in the swim wave in front of me), which gave me a lot of motivation to keep pushing and try to catch up with him so we could finish together! Apparently my friend who I finished the swim with was also right behind me but we never saw each other.
The entire run I was so tired and just wanted to stop, but I kept running the entire time and just tried to hold it together! The hat was a great idea since the sun was beating down on us at this point (even though it was still not that warm out luckily). Before too long, we got to the parking lot just outside of the park, and the other athletes that finished said the finish line was right around the bend! I picked up my pace as much as I could and was so happy to finish! Dan was right in front of me so he got to cheer me on which was great!
Run time: 27:10 (8:45 / mile pace) 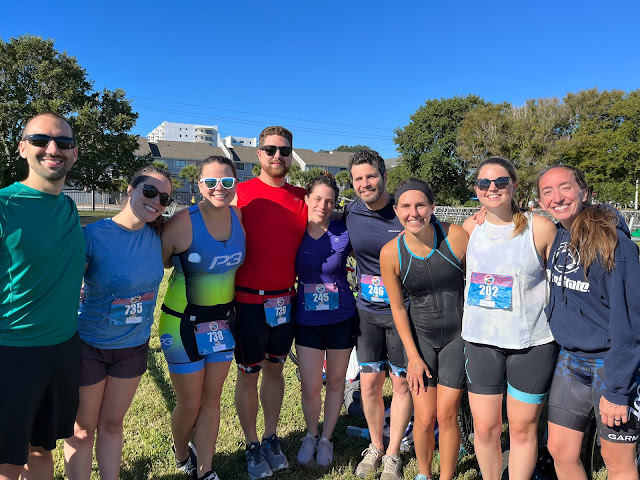 Overall, my time was 1:47:30 and I was SO happy with that and how the race went. I had a lot of fun, especially on the parts that I was most nervous about (the open water swim and bike). I would definitely do this race again- the atmosphere was really positive and beginner friendly, the logistics went very smoothly, and the course was beautiful and easy. Highly recommend (plus- the post race beers were great!) 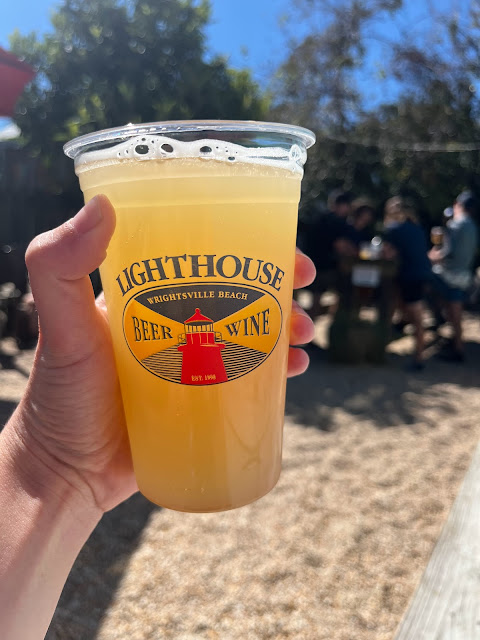 Have you done a triathlon before?
What was your best race experience?
races Triathlon