I'm switching up my graphics today to get ready for the end of summer/beginning of fall.  Fresh flowers just didn't seem appropriate anymore, so I did a little water-coloring in Paint!  I hope you like it. 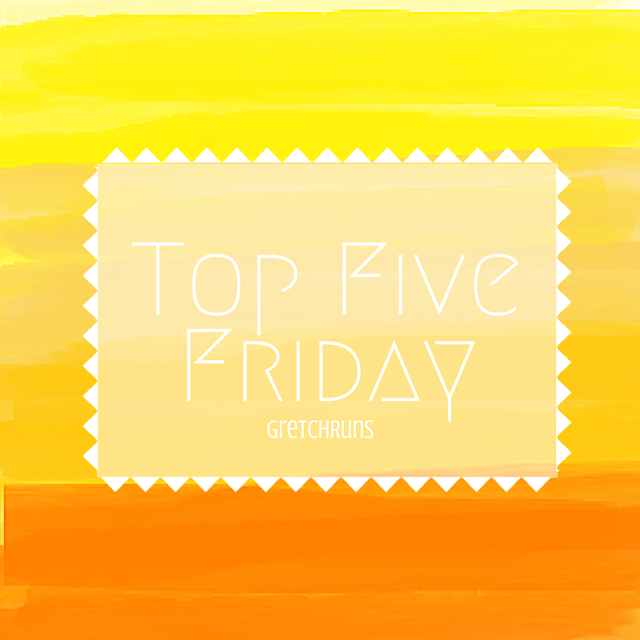 Today's topic from the Friday Five ladies is "5 Things I'll be Doing in 5 Years".  I already have a post dedicated to that (my 30x30 list..check it out here!), so today I wanted to share 5 events that I'm looking forward to that are taking place within 5 years.  Most of these I won't actually be able to attend, but if I find a few spare dollars lying around, I'm there!

I am the biggest Olympic fan and get really excited when the Games start!  I'm already starting a countdown to next years' Games (less than a year!!!).  I would love the chance to see a few events, so maybe Pittsburgh will host it some year; otherwise, I need to do some traveling.

Presidential elections are always an interesting time in the United States.  During the last election, I was away at college (and it was my first time voting for president) so I feel like I can make a more informed decision this time around.  This is not going to turn into a political blog at all, but it's always interesting to follow the debates and primary elections!  We'll see what happens...

Most of my family attended Penn State for college, and I knew from a young age that there was a huge rivalry with Pitt.  Unfortunately, that football rivalry has been dormant since 2000, but there's a four-year series starting in 2016.  I couldn't be more excited and hope to make it to a least one of those games (still deciding if I should just go to the game in Pittsburgh for convenience, or travel to Penn State to be at home).  In case you're wondering, Penn State is leading in the series 50-42-4!

When Dan and I first started dating, his only request was for me to watch the entire Star Wars franchise.  I ended up watching them in numerical order and really liked the films, so I'm excited to see the new ones come out!  I have to admit that I'm a little disappointed that my favorite character (Jar Jar) isn't in the new movies.  Apparently I'm the only one who liked his silly sense of humor, because he's supposedly the most-hated movie character.

This entire section is sponsored by Jennifer because she is the main reason for my Lululemon obsession.  Not only does she make me want to buy every article of clothing they offer, but now I want to run their annual half marathon!  I'm hoping to register for the 2016 race, but it apparently sells out within minutes so let's just add this to my "future plans" list just in case!

Gold Star of the Week

I'm not even sure if this will qualify as a gold star, but I kinda invented my own drink and I'm obsessed with it- drinking it non stop this week.  I mix one scoop of Trader Joe's Spicy Chai Tea Latte mix with a cup of hot water, then pour in a splash of hazelnut creamer.  It's amazing- all those delicious exotic flavors of the chai with the perfect amount of creaminess.  I'm pretty obsessed and think you should all try it as well!

Demerit of the Week

I haven't been biking much recently.  After my original excitement about having the bike (and trying to get over my fear of riding it) I've been neglecting it a bit in favor of running a lot.  I need to start committing to riding a few miles every week before it gets too cold out!  To my Pittsburghers out there, where is your favorite place to bike?

This band won the most recent season of the Sing-Off, and Dan and I are obsessed with them!  Their videos are always hilarious, and they do a great mix of original songs and covers.  This remix has a bunch of great songs, and the way they mixed them all is perfect.


Fire Under My Feet : Leona Lewis

I don't normally associate Leona Lewis with songs that make you want to dance, but this song is definitely that!  I love this song so much, and can't wait to hear the entire album (which is being released in September!)

Drag Me Down : One Direction

No shame, I love this song! Am I too old to like One Direction?  What's the cutoff?

To be honest, I just love every song that Fetty Wep is in.  I don't know if it's something about his style of rapping or his unique voice, but I just download every song that he's featured in!  This is no exception, and it's been on repeat in my current running playlist.

What is your "happiness gold star" of the week?
Is there any event you're looking forward to in the next few years?

Linking up with Mar, Cynthia and Court
as well as Heather and Clare!

Have a great weekend!