January 24, 2017
Happy Tuesday everyone!  It's been a while since I shared a Tasty Tuesday post, but I have a good one planned for today.  Since this is my first marathon I'm training for while vegan, I get a lot of questions about what I eat for fuel.  I thought it would be helpful to share what's been working for me- before, during and after a run.  I'm always looking for new ideas to try out, so be sure to let me know what fuel you use! 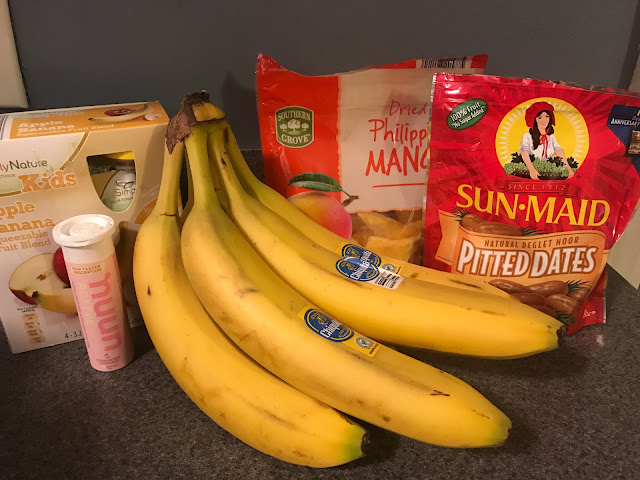 Roasted Sweet Potatoes - This is running fuel that I discovered works really well for me when I did my Whole 30 last year!  I like making a ton of roasted sweet potatoes and eating them throughout the week before a run.  They're great on their own, or I add some sauteed kale or spinach and vegan sausage.  For a sweeter option, I'll add almond butter and granola!

Baked Oatmeal - Making a big pan of baked oatmeal is another time saving meal that I make.  On Sundays, I'll cook a batch of oatmeal (I use this as a base recipe and change up the ingredients), then grab a piece each morning.  The oatmeal is a great kick start to my day!

Apple Sauce Packets - I'm pretty sure these are marketed towards kids, but I love apple sauce packets.  They're easy to grab when I'm in a rush in the morning, and give me just a little something in my stomach before I run.  I'll have one of these if I have an easy run planned in the morning.

Bananas - Not only are bananas cheap, but they're also easy to digest before a run!  Most days I'll grab a banana on my way out, but if I have more time I'll add some almond butter and cinnamon for a sweet treat.

Dates - This is another type of fuel that I discovered during my Whole 30!  Every gel out there has sugar added, so having fruits or vegetables were my only option.  I found out that cutting up dates into small pieces and having a piece every few miles during a long run really worked well!  They're easy to eat, and digest well when I have a small amount.

Apple Sauce Packets - I'm seriously obsessed with these things..I love having a little sweetness during a run and these hit the spot!  They're really liquidy too, which makes them easy to "drink" on the run.

Dried Mango - Mango is my favorite food, so getting to have some during a run is a treat to me.  These give me a little shot of energy and sugar when I need it, and they just taste delicious!

Nuun - I've been drinking Nuun for years during training!  I love how fizzy and delicious the flavors are, and they don't upset my stomach like other sports drinks do.  It does the trick, and doesn't give me cramps.

Smoothies - I usually can't eat anything right after running, so all of my post-run fuel is liquid.  One way to get in calories quickly is by making a smoothie.  I like to pack it with hydrating ingredients like coconut water, anti inflammatory ingredients like beets, and protein like chia seeds!

Plant Based Protein Powder - I don't really have protein powder much after runs, but I might stock up since my runs are getting longer and longer.  If anyone has a plant based protein powder that they like, please let me know in the comments!  I need suggestions :)

Tart Cherry Juice - There have been studies done about tart cherries and its ability to reduce inflammation and joint pain.  I don't know if it's a placebo effect, but this stuff is magical!  It's kind of expensive and hard to find, so I don't have it all the time, but it's really great after a run.  It helps me recover really quickly, and it tastes really good!  Sometimes I'll even throw this in my smoothie as well.

What are some of your favorite things to have as fuel?
Do you eat before running?
Coffee before runs- yay or nay?  I like to have a shot of espresso!
food training vegan