January 26, 2017
I honestly can't believe it's Thursday already!  Where has the week gone?  Some weeks seem to dribble by in the slowest way possible, while other whoosh by in a blink.  I have a lot of thoughts to share today, so it's a perfect time to join the other bloggers and Think Out Loud.

If you're not a tennis fan, you can skip on to the next section because I need to talk about this crazy tournament!  I've been following tennis for the past few years, and I can honestly say that this has been the most surprising and insane Grand Slams (or tournament in general) that I've ever followed.  Not only did the men's #1 and #2 seeds fall early on in the tournament (to unseeded players none the less!), but the women's side has been unpredictable as always.  I love having a good underdog story, and on the women's draw we've had that with CoCo Vandeweghe and the incredibly resilient Mirjana Lucic Baroni.  To give you some perspective, Mirjana last won a match at the Australian Open in 1998, and is now in the semi-finals!  (I wrote this before her match against Serena, so her dream is either still alive or her amazing story ended against the GOAT.) edit- CoCo and Mirjana both lost, which means it's a Williams sisters final!!!

In the men's draw, it's so exciting to see Roger Federer and Rafael Nadal back in good form and competing at the top level.  When I started watching, they were both starting to go through injuries and people started to talk about retirement.  I'm hoping for a Fedal final and really don't know who I would cheer for if they both make it! (edit- Roger won...so VAMOS RAFA!)  Every match that I've followed has been so exciting and filled with so much suspense, so I'm really excited for the rest of the year in tennis!

A few weeks ago I mentioned that I want to start being more creative this year, and this month I'm kicking that off by getting back into cross stitching!  I've done a few projects in the past, and it's one of my favorite crafts to do.  I love how relaxing and mind-numbing it is (I could lose 2+ hours working on a design), and the finished product usually turns out beautifully.  There are so many "contemporary cross stitch" designs available now, so I'm excited to get started!

I've been trying to read more books this month, and here are the ones that I've recently finished:

Talking As Fast As I Can - All Gilmore Girl fans need to read this.  Lauren Graham is a great author whose writing style matches her personality perfectly.  After finishing this book (in about 2 evenings) I started to watch Parenthood just to get more Lauren in my life.  10/10

Meb for Mortals - A lot of runners recommend this book, so I was excited to read it.  I'm a huge Meb fan (and sad to see he's retiring this year) and enjoyed hearing his advice.  Most of the stuff in the book wasn't earth shattering to me, but it was still nice to get a perspective on how he approaches training and racing.  7/10

Ubik - This book is part of my 30x30 quest to read books off of Time's 100 Best Novels list.  I don't read much sci-fi, so this book was definitely out of my comfort zone.  I liked the concept and story line a lot, but the writing style was hard to understand and really get into.  6/10

I'm in the middle of Today Will Be Different, which is so, so good!  I'll give my final thoughts after I finish it, but I'm plowing through it right now

This is something that I need opinions about- Floating in sensory deprivation tanks.  If you haven't heard of it, you basically lie in a tank that's filled with Epsom salts and warm water.  The tank is sound proof and completely closed off, and you just float for an hour or hour and a half.  This is supposed to be great for recovery (especially if you combine it with a massage) but the idea of being shut off from the world kind of freaks me out.  On the other hand, I like to try new experiences and getting over fears, so I'm thinking of giving this a try!  Dan really wants to try it, so I might just give it a shot and hope I don't panic once the door shuts.  If anyone has tried floating or has opinions about it, please let me know!

edit- on my run last night I listened to the YHL Podcast and they talked about floating!  If you want to hear about someone's experience trying it out check out this episode.

Every year, there is an official World Marathon Challenge that takes runners to all seven continents to run seven marathons in seven days.  This year's challenge started on Monday with a race in Antarctica, then went to South America and North America.  I've been following the challenge this year, mostly because Ryan Hall is participating (if you haven't heard of him- look up some of his amazing stats!).  He recently retired from professional racing after dealing with exhaustion and injuries, but decided to take up the challenge to raise money for charity.  He's been sharing his experience in real time on Instagram, and it's been interesting to follow along. 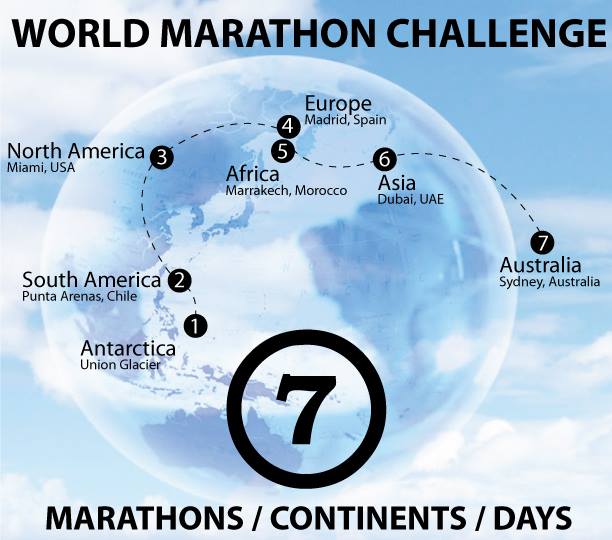 Besides Ryan, there's also a runner who is attempting to break the record for fastest total race time and has broken three hours is all three races so far, as well as a woman who is running an extra few miles every day to complete a 50k on each continent.  It's been amazing and inspiring to follow these stories, and I'm cheering for them all to complete the challenge!


What are you thinking about?
TOLT