I knew that November would be a packed and busy month, and so far it is definitely delivering! Last week I went on a long-weekend trip to Denver to meet up with two of my very best friends (Jessie and Kelsey) from Pittsburgh. The only plan for our trip was going to a University of Colorado Boulder football game and visiting Kelsey's brother who works at the school, but otherwise everything was open. We were definitely lucky with some gorgeous clear and warm days, and here's a look at what we did! 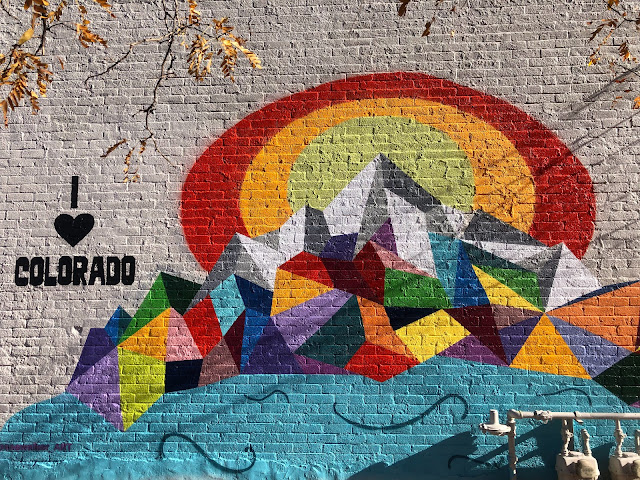 After landing and picking up the rental car, we made our way to Denver Central Market for some breakfast! There were a few options in the market and a coffee shop, and I ended up getting a breakfast burrito and Americano. We made our plan for the day while strolling around RiNo Art District and enjoying all of the beautiful murals! 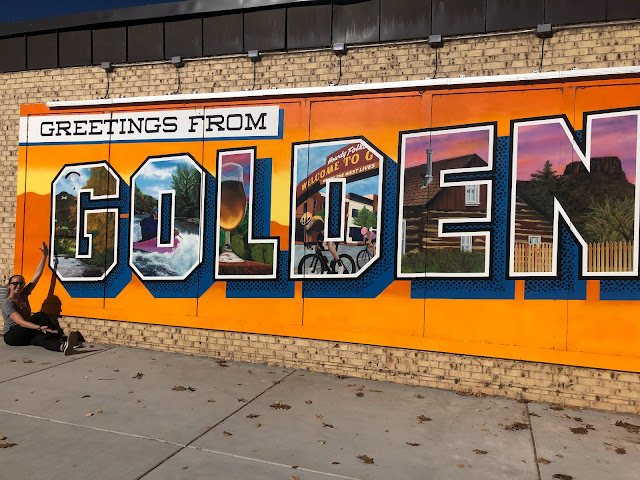 We decided to head to Golden next since we still had some hours to kill until checking into our Airbnb. There were some free museums in town, so we just sort of wandered around and learned more about the town (including the fact that Jolly Ranchers are from Golden and started as an ice cream shop!) We got some recommendations to check out Colorado + 49 Cidery (which was just fine but none of us loved it) and Mountain Toad Brewing (we really liked their beers!) 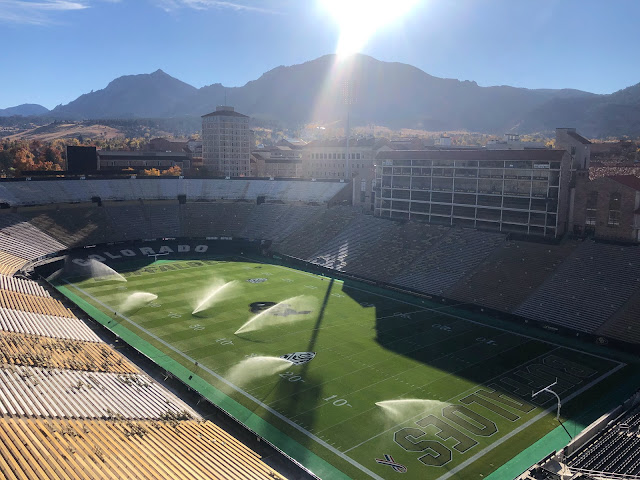 Kelsey's brother just got done with work for the day so we made a detour to Boulder and got a tour of the empty football stadium! What a view! He also took us to Dark Horse for some beers and dinner, before we made our way to our Airbnb and picked up some food for our adventures that week. 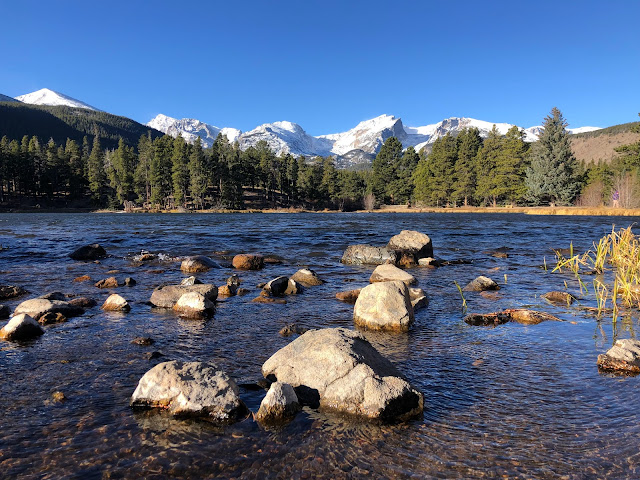 When we originally started planning for this trip, we all agreed that it would be great to go to Rocky Mountain National Park, but that without bringing tons of winter gear it would be unlikely to go in November. But- Mother Nature was on our side because we had a warm day that let us hike and explore this gorgeous park! We started out at Sprague Lake and did a mile loop around the lake, then headed to Bear Lake Trailhead. 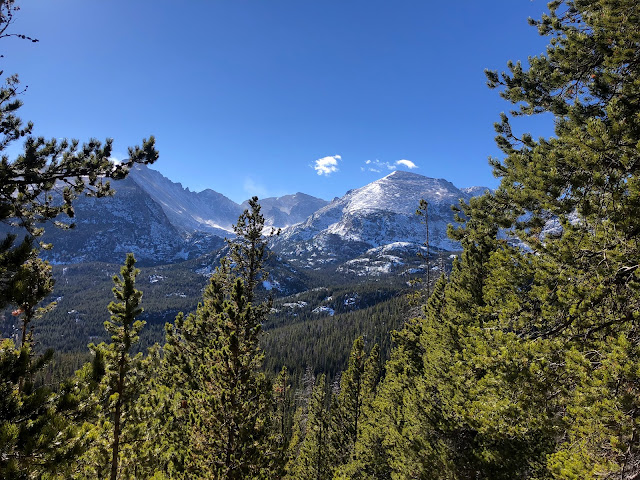 This was at about 9,400 feet of elevation, and we were warned that it got pretty icy and snowy the further you went. There were a bunch of different trails we could take though, so we basically went as far as we could on one trail, then tried another one. The views were magnificent and we ended up going about 3 miles on those trails! 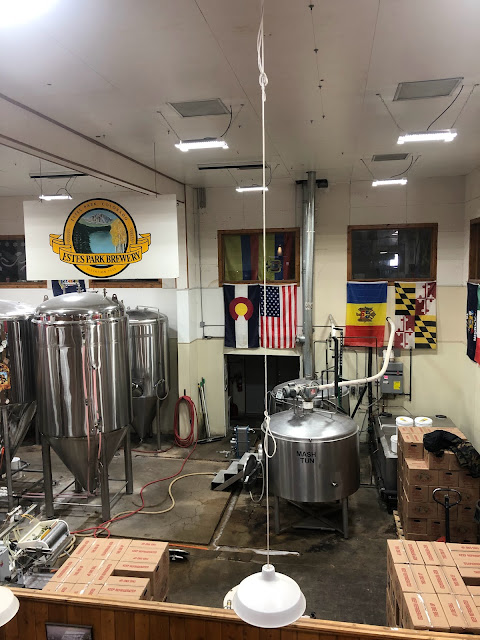 We were ready for some food and post-hiking beers at this point, so we stopped at the Estes Park Brewery. The town is home to Stanley Hotel, which inspired Steven King's The Shining, so a lot of the beers were themed after that (Redrum Ale, Shining Lager, etc.). The cool part of this place was that you could do a free tasting of any four beers, which we all took advantage of. 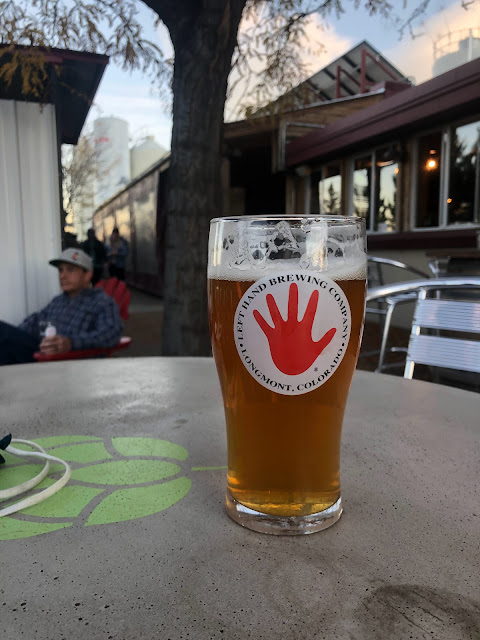 Our final stop of the day was to Longmont- home to Left Hand Brewing! All of us are dark beer and milk stout lovers, so it was a must for us to visit. This ended up being my favorite brewery stop of the trip- the staff was all VERY friendly and helpful (including a surprise visit from the founder who drank with us) and the beers were delicious! The bartenders also recommended Summit Tacos for dinner and St. Vrain for cider. Both were solid suggestions and ended our night well. 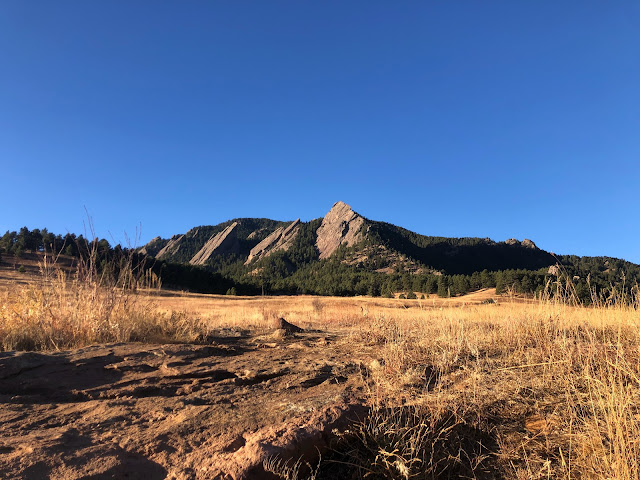 The last full day in Colorado started out with a quick coffee stop at Cherry Bean and a hike at the Flatirons. We lucked out with a parking spot at Chautauqua Park in Boulder (which is a very popular spot and has a great facility at the trailhead) and headed up the mountain! We started hiking at around 9:00 and the trail wasn't too crazy, but by the time we got back down it was INSANE. There were lots of hikers, trail runners, and rock climbers all over the place. 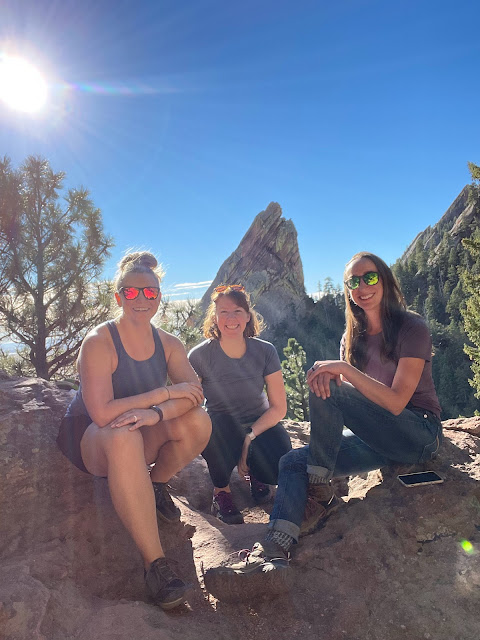 We opted to do the Flatiron 1 and 2 hike, which ended up being about 4 miles. It was rated as moderate but was very hilly and had some scrambling sections, so we took it easy with lots of breaks and enjoyed the scenery around us. If the altitude and hike didn't take our breath away first, the view sure would. 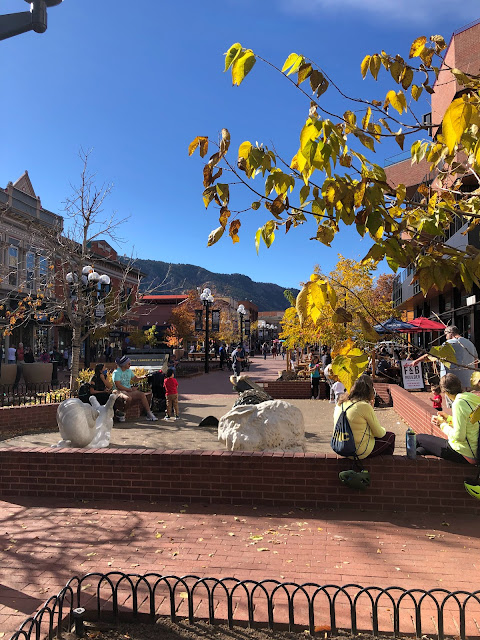 Along the hike we met an au pair from South Africa who recommended a sushi place on Pearl Street in Boulder. We made it there for lunch and got to sit outside and take in all of the action on the famous and beautiful street! I got a poke bowl which completely filled me up, and we strolled around afterwards. 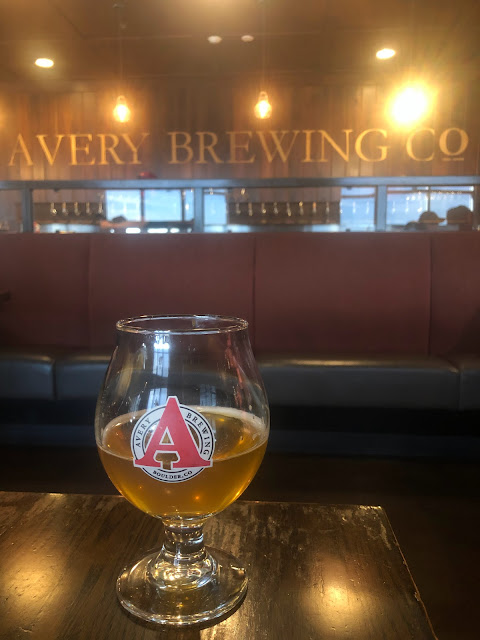 We still had some time before the football game, so we decided to head to nearby Avery Brewing for a quick drink. I got some really interesting and flavorful beers, and loved the huge outdoor space! It was a little warm so we decided to head inside, and there was a ton of space indoors as well. It was really neat! 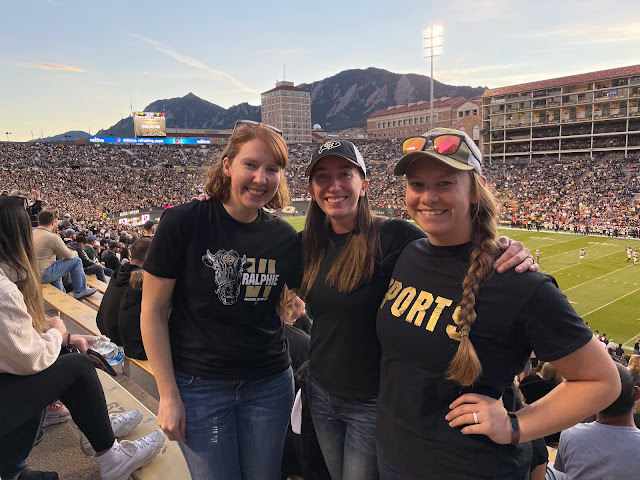 It was game time at this point, so we drove to campus to park and followed the throngs of fans heading to the stadium. It was homecoming, so there were tons of tailgating and fans all over the place! It's been a while since I've been at a college game so I loved the energy! We were able to make it just in time for pregame, which featured a show by the band and a real-life buffalo running the team onto the field. That was such a cool thing to see and such a fun addition to the game! She ran again at halftime and inspired a win for the team. 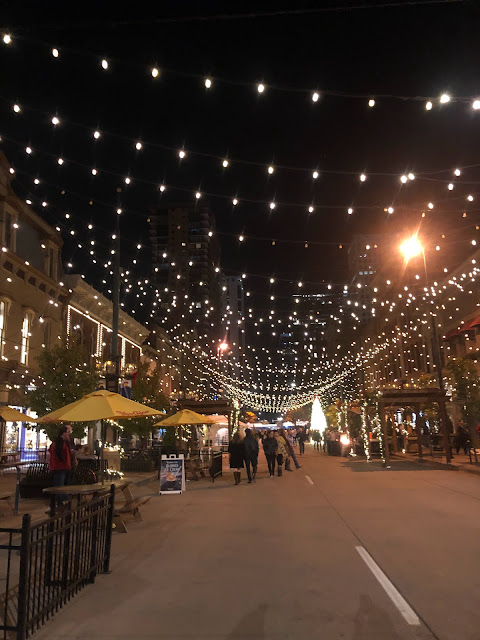 After leaving the game we headed downtown for dinner at the Milk Market, which was a really cool eatery featuring multiple restaurant concepts in one location, and walked through Larimer Square. Christmas decorations were starting to go up and the square was lit up in string lights, so it was a really magical scene. 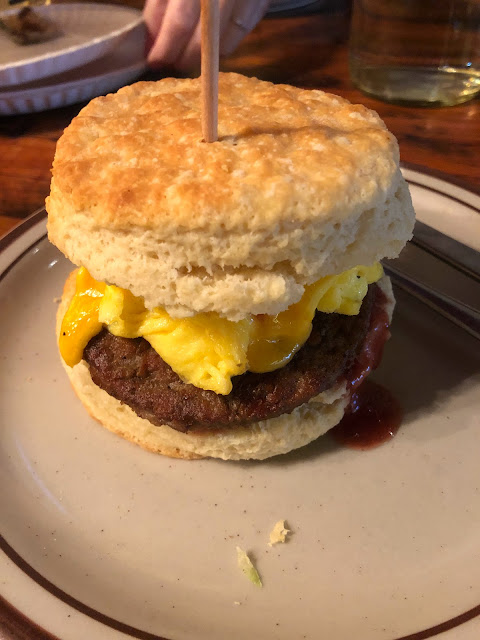 Our final day was pretty laid back, starting with watching the New York City Marathon from the comfort of our Airbnb while sipping coffee. It ended just as we had to check out, so we made our way to Denver Biscuit Company for breakfast. Even though it was a bit of a wait it was well worth it- my biscuit sandwich was probably the best thing I had on our trip (I got the Tomahawk with an Impossible sausage patty- yay for vegetarian choices)! 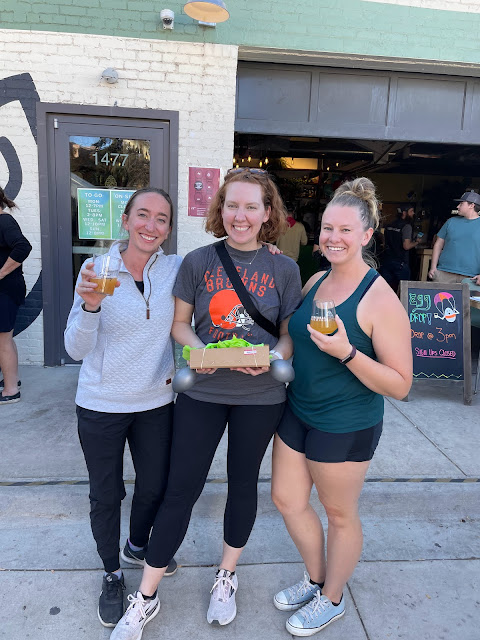 We decided what to do for our final few hours while walking around City Park, and (surprisingly) picked a brewery right down the street called Cerebral Brewing. When we walked in we found out it was their 7th anniversary, and since the brewery is science-themed they were holding an egg drop competition. Remember those back in elementary school- when you were given a bunch of craft supplies and had to make a container to keep an egg safe from being dropped off a roof? That was our project and it ended up being an absolute BLAST. We had such a great time and it was the perfect, random way to end such a fun trip! Sadly our little egg did not survive in the USS Friendship Tread, but we all enjoyed it (and our beers) so much!
Have you been to Colorado before?
What's your favorite park you've been to? RMNP is definitely high on my list now..so incredible!
travel