May 17, 2016
Happy Tuesday!  Today I'm excited to share some photos and information about the first part of our trip to Belize!  We spent the first three days on the beach, then followed that up with six days in the jungle.  I hope you enjoy this look at our trip!


We stayed at Xanandu Island Resort, which is located in San Pedro, Belize, a town on the southern part of the island of Ambergris Caye.  To get there, we flew into the Belize International Airport, then took a short 30-minute flight over to the island.  There are also water taxis that you can take for cheaper, but it takes longer.  If you ask, the pilot will even let you sit in the co-captain seat on the plane! 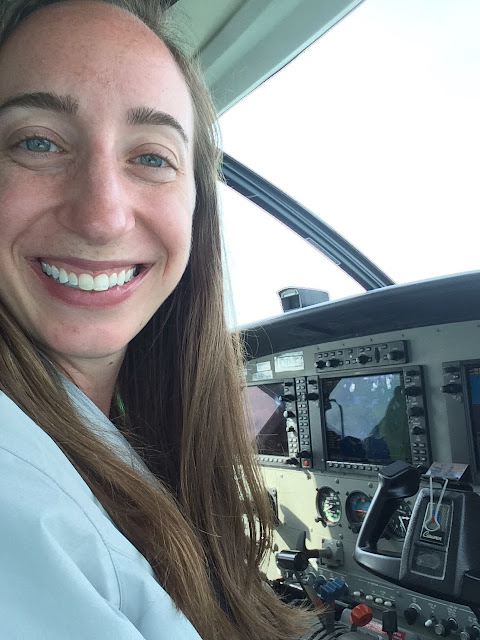 The island is really safe- Dan and I walked around at all hours of the day and never felt in danger.  There is one main street that everyone drives on, and lots of side streets.  I didn't notice any street signs, so if you're looking for a particular address, I would look for what buildings are around it! 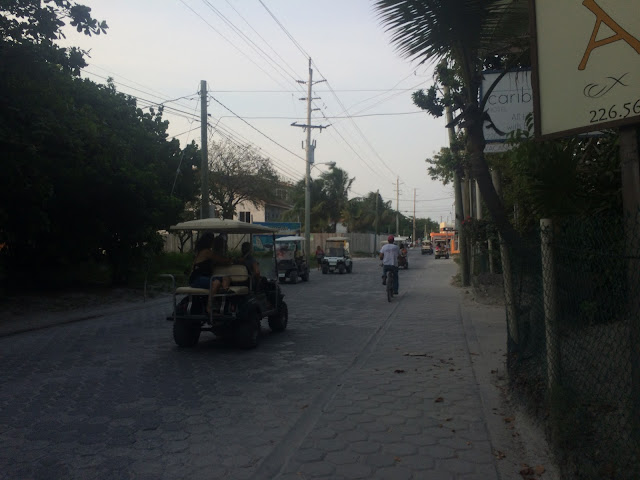 The currency in Belize is the Belize dollar.  The conversion to US Dollar is always 2 to 1, so all places accept US money and give change back in Belizean money.  It's also interesting that the official language of Belize is English!  We learned that most families teach their kids Spanish at home, and some more traditional families also speak Mayan at home. (More on the Mayan culture in my post on the Cayo district!)

Xanadu is right on the beach, and offers free kayaks, paddle boards, bikes, and snorkeling gear.  They also rent golf carts (the main mode of transportation on the island).  There's also a big swimming pool that's open 24/7, a beach BBQ that's free to rent, TONS of hammocks (including a private one on each patio) and a beach bar.  Our room also had a full kitchen (including a blender..what?!) which was a great bonus, since there's no restaurant at the resort. 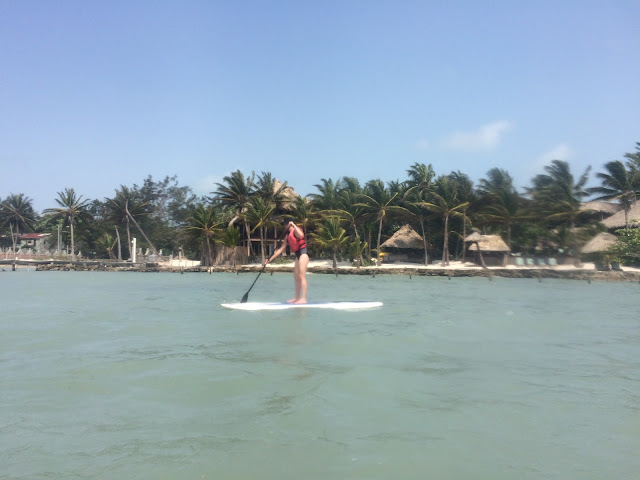 The food on the island was amazing!  There are a lot of influence on Belize's cuisine, and wikipedia describes it as Mexican/Central American/Jamaican/Anglo-Caribbean cuisine.  Since we're right on the water, fresh fish was served everywhere.  My favorite dish was a fish coconut curry from El Fogon, served with shrimp ceviche.  So good! 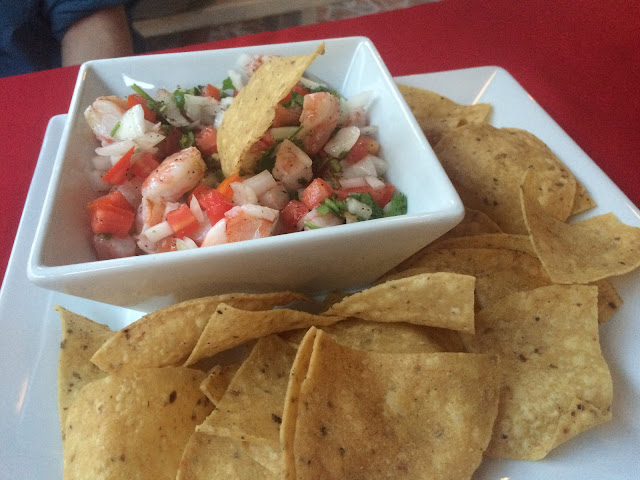 We also made a stop at Robin's Kitchen, which is the top-rated place to eat on the island.  This is a little road-side shop with a tiny kitchen and some picnic tables outside.  The specialty is Jamaican Jerked chicken, served with rice and beans and cole slaw.  The meat was so flavorful and not at all dry- and the spice really snuck up on me! 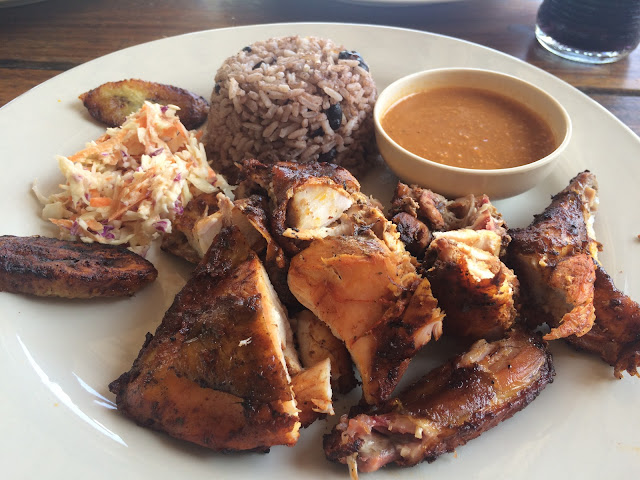 Dan and I went snorkeling for the first time as well!  A boat came to pick us up on the private dock, and we sailed out to Hol Chan and Shark Ray Alley.  The water was so clear, and we got to see turtles, coral, sting rays, flounder, barracuda, and millions of other fish that I've never seen before.  And yes- we also got to swim with sharks!  At Shark Ray Alley, the nurse sharks and sting rays come right up to the boat to be fed, and we were just told to jump right in.  The sharks completely ignored us and swam all around us.  It was SO cool! 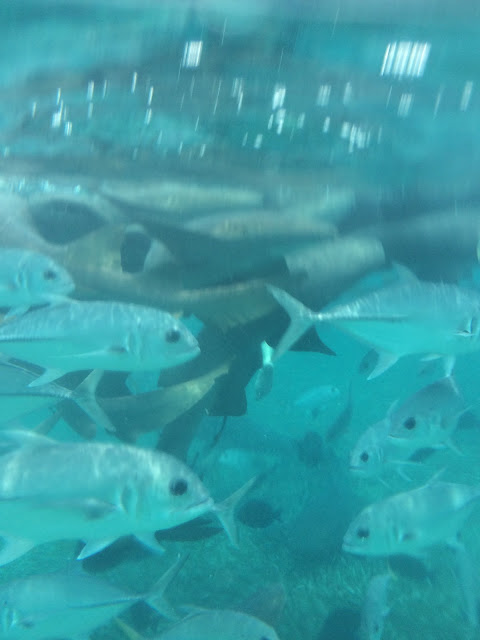 We made a stop in Caye Caulker during our snorkeling trip.  Our tour guides told us that this island is what San Pedro used to be like before it got touristy.  The beaches were beautiful, and it was a lot more quiet than on the main island.  Everyone drove on golf carts and bicycles here as well, and the roads were all sand and dirt.  We were told the motto of the island- "No shirt, No shoes, No problem.  No money- BIG problem!" 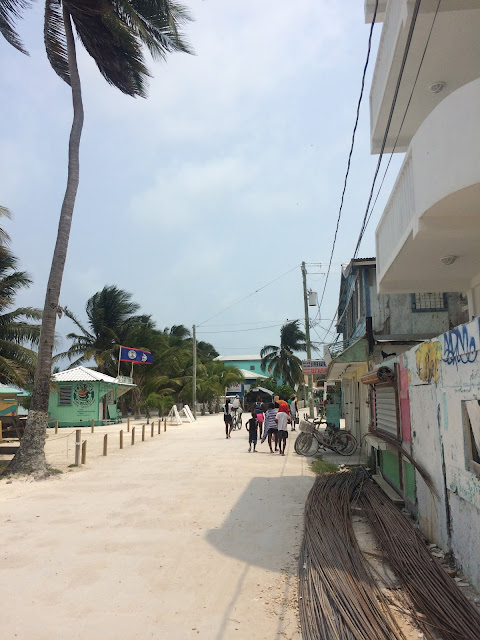 I hope you enjoyed this look at our trip!  Next up will be the first part of our stay in the Cayo district! 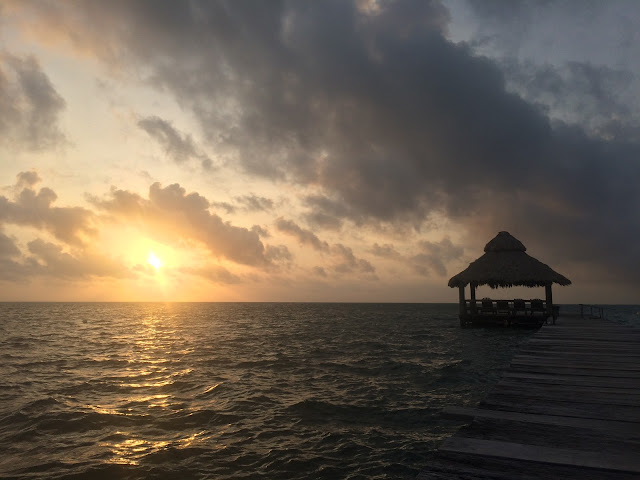