March 02, 2017
Even though February is the shortest month of the year, it's hard to believe that we're already onto March.  2017 is flying by!  It's already time for the monthly What's New with You linkup with  Kristen and me, so I'm here today to share an update on my resolutions, as well as random updates.  I hope you'll join us by linking up below!

Break 4 hours in the marathon.  I had my first race of the year (recap here) and it went really well!  I did a 20 mile run with a 15 mile race in the middle.  My pace was good and right on track for my goal, but I went out way too quickly.  I need to work on pacing!

In February I also hit my highest mileage month ever with 135 miles.  I'm starting to feel a little bit of soreness and am having no trouble keeping my easy runs slow, but overall I'm still feeling great.

Buy lunch less than 2 times per month.  I didn't go out for lunch (or dinner!) at all this month.  I'm making a better effort of meal prepping at the beginning of the week and making sure I have enough lunches planned for every day.  Some weeks I'll only prep enough for 3 or 4 lunches and think that I'll have the motivation to cook more during the week, but that never happens and I end up going out instead.  I think I'll share another vegan lunch idea post in March if anyone is interested!

Learn a song on piano.  I'm definitely seeing a lot of improvement on the piano.  I still haven't picked a longer song to learn but I think I'll stop by a music store and find a new piano book to try out.

No-buy until the marathon.  I kind of broke this because I did buy a few things, but I also ended up returning a bunch of stuff that's been sitting around, so I didn't actually spend any money.  The running shoes that I ended up buying in January (Brooks Pure Flow 6) got returned, as well as the replacement pair that I just got (Saucony Freedom ISO).  Even though I liked the Freedoms, they were just too tight and expensive.  I'll keep an eye out for any kind of sale or special and will buy the next size up!

Be more creative.  I made a small cross stitch project.  I wanted something simple and minimal for my coffee bar area, and made an easy "but first, coffee" sign with a little coffee cup.  I'm regretting using the yellow thread in 'coffee' because it's hard to read, so I'll probably end up re-doing this. 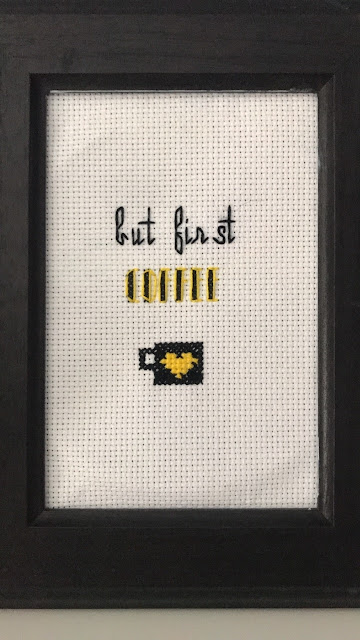 Disconnect daily.  Dan was gone most of the month for work training, so I haven't been as good with this in February!  Definitely need to get back in the habit.

Save $$$!!!  We did really well with saving in February.  We didn't buy anything besides groceries, didn't go out to eat at all, and got our tax refund for the year.  I would call February a success!

Start home brewing.  We successfully made our first case of beer!  We made an Irish Red Ale from Northern Brewer, and it actually tastes pretty good.  Dan isn't really a fan of how hoppy it is, so our next one will be something sweeter like a wheat or Hefeweizen.  We have a ton of beer to drink, so please help us if you're in the area :) 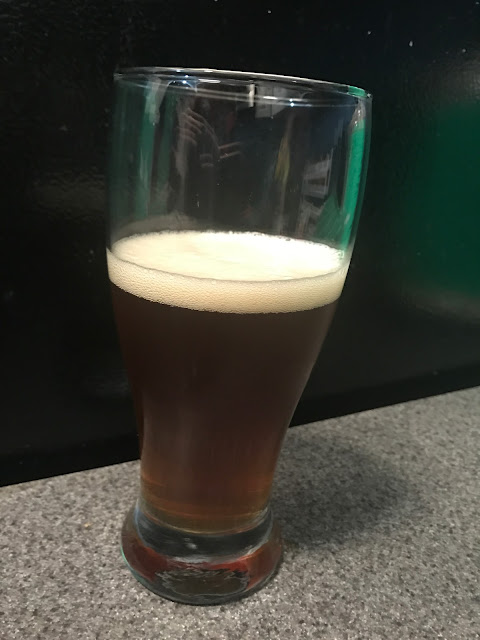 I tried out a float tank...and I actually enjoyed it a lot!  We went to Pittsburgh Massageworks, and the owner was so helpful and talked us through everything.  I had a lot of questions and he made me feel so comfortable and safe.  The tank had a door that could be left wide open or just opened a crack so that you weren't in complete darkness.  I started with the door all the way open, then felt comfortable after about 5 minutes to leave it open a crack.  At first, my body felt really tense and I felt like I had to work to float, but after a while I got to trust the salts in the water would keep me afloat and I really relaxed.  My mind went blank and I didn't have any hallucinations or "coming to Jesus" moments that some people talk about.


I wanted to close the door, but I felt so relaxed and didn't want to get up, so I just left it cracked the whole hour.  The downside of this was that the parts of my body that weren't underwater were really cold.  Dan had the door closed the whole time and said that he couldn't tell where the air started and the water ended, so next time I would definitely shut the door to be more comfortable.  Overall, I had a really good experience and it helped my muscles relax after my 20 mile run.  I would recommend trying it out to anyone!

The CrossFit Open started and I'm having FOMO.  Even though I don't do CrossFit, I love watching the Games and Regionals every year, and listen to a few CrossFit podcasts.  The Open just started last week and the first workout is something that seems right up my alley- dumbbell snatches and burpee box jump-overs.  I had such an urge just to try out the workout for myself, and it's making me want to join a local box and enter the Open next year!  Is anyone entering the Open so I can live vicariously through you?


That's all I've got for today- let me know what's new by linking up below!


An InLinkz Link-up
What's New With You