March 27, 2020
Hi everyone! Today I'm going to be shifting away from the current news and looking back on a trip I took in December to a few beautiful national parks. The first park we visited was Zion, located in Utah. While we were there for three days, we did a ton of hiking and saw some of the most incredible views and scenery.  I'll be sharing all of the hikes that we did, along with restaurant recommendations and more. Enjoy and stay safe! 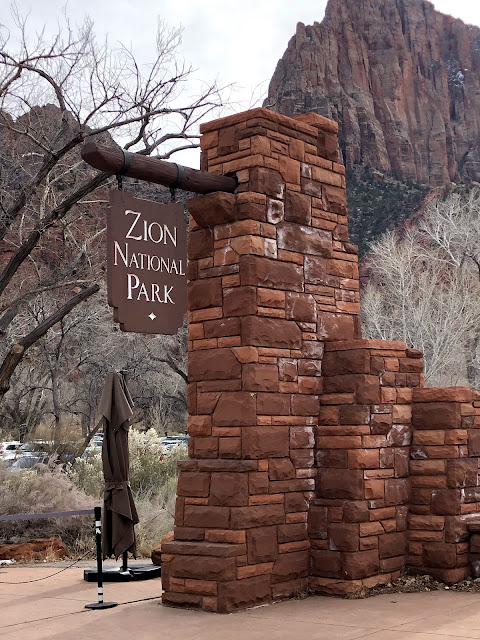 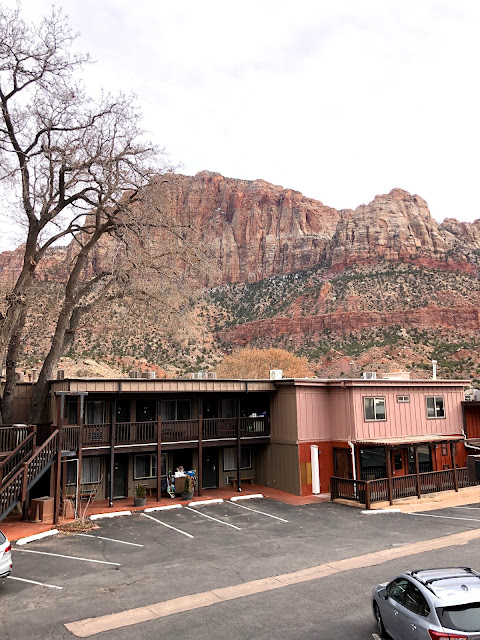 I found this hotel by doing a Hotwire deal. It was really cute and had a rustic look which put me in the western mood! I loved the location of this hotel as well- we were in the small town of Springdale which sits at the entrance of the park. There were lots of restaurants around us, and we were within walking distance of the park. There's also a shuttle in this area to drive you to the park which is convenient if needed. Plus- this was the view from our room- how gorgeous is it!?

One of the best parts of the park is the shuttle service. While this is usually not running in winter, the service started back up the week we were there to accommodate holiday travelers. It was so nice to be able to be dropped off anywhere in the park or to hike to different locations and not worry about transportation. Since there's only one main road in the park, I just planned out our hikes according to the shuttle stops which worked out really well. I also recommend starting as early as possible because towards the end of the day people had to wait a while for a free shuttle. 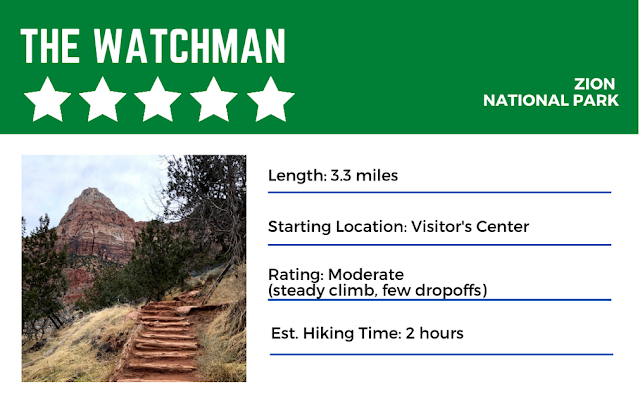 This was the first hike that we did, and the views were spectacular. Even though most of the views on all of the hikes were similar, it never got old! This was also probably the toughest hike we did in terms of length and steepness, so it's probably good that we did it first. 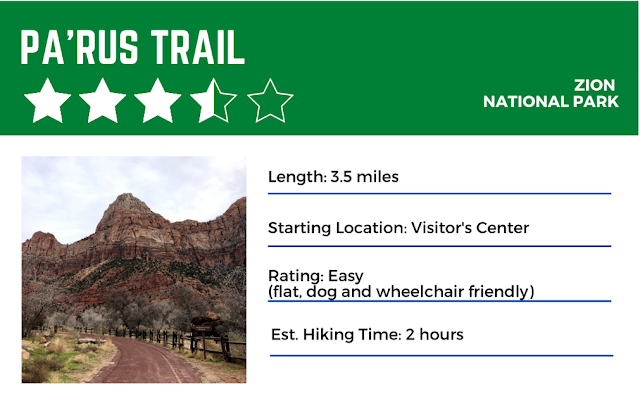 Our second hike was a nice, flat hike. This one was nice because it's the only hike that allows dogs, so we got to see lots of them! There were also a lot of river crossings and shuttle stops, so you could make this as long or short as you want. 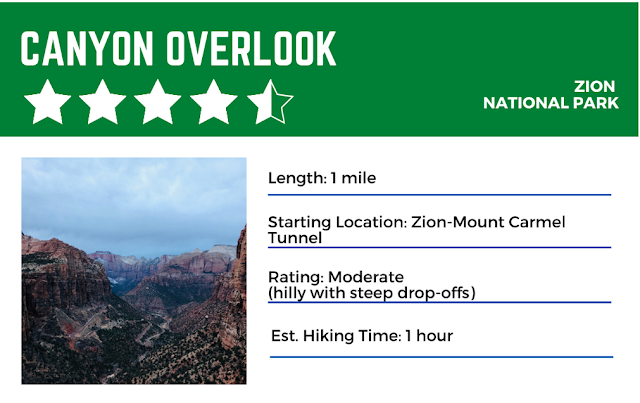 For our second day, we woke up early to hit up the Canyon Overlook  trail, which is one of the most famous hikes. This is also one of the only hikes that you have to drive to, since it's on the other side of a tunnel and doesn't allow bikes or shuttles to go through. The parking lot is really small, so we were lucky to get to hike it on our first attempt. This is a popular hike for good reason- the overlook is incredible and you can see the canyon for miles and miles. 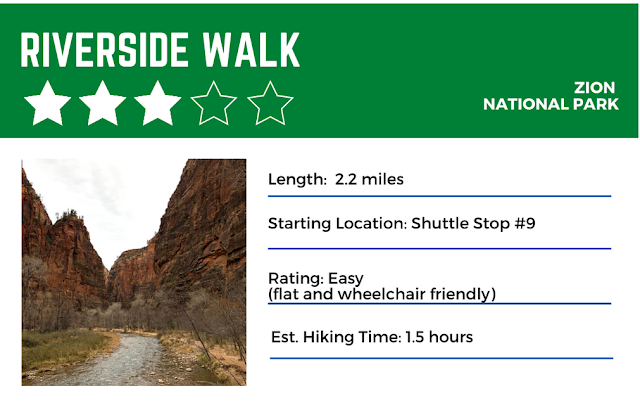 We made our way to the furthest shuttle stop for the next hike, which is a beautiful, flat walk along the river. This is also the start of the famous Narrows trail (which continues into the water at the end of the trail). Since we went in December we opted out of that part, but I can't wait to come back when it's safe to keep going! 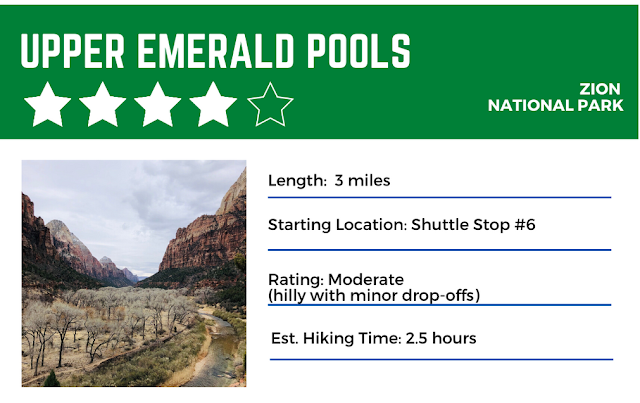 Finally, we took a shuttle back towards the Visitor's Center, stopping at a few locations to check out a some landmarks in the park (unfortunately some hikes I wanted to check out were closed for the season or because of rock slides). Our final hike was a combination of a few trails that link up together, starting with the Kayenta Trail, to the Upper Emerald Pools, and finally the Grotto Trail. It was a nice loop with some big hills and a few small waterfalls. The very top of the trail had a frozen waterfall which was really cool to see. 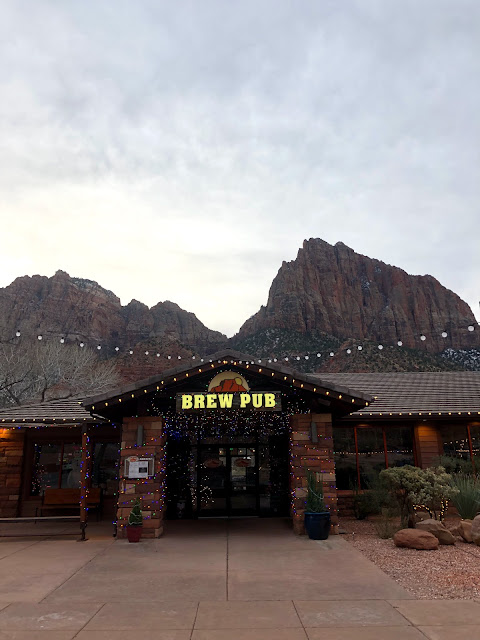 This was the first place that we stopped in the park (since we arrived after dark) and it quickly became my favorite restaurant of the entire trip with more stops here. The food was really delicious, and the beer was fantastic. Utah has pretty strict drinking laws about ABV and needing to order food with alcohol, but that doesn't stop them from making some yummy beers. I tried a few different ones but particularly liked the darker beers. 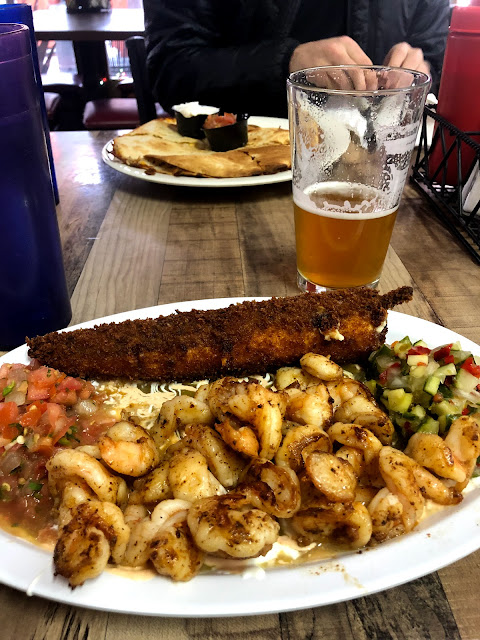 After a full day of hiking on day two, we stopped at another restaurant in Springdale. This place was awesome- great food with big portions (above is my chili relleno with shrimp..so good) and good local beer. It's also set in a renovated gas station, so the decor was interesting too. The servers were also really nice and brought everything out quickly. If you're in the mood for Mexican food I highly recommend checking it out. 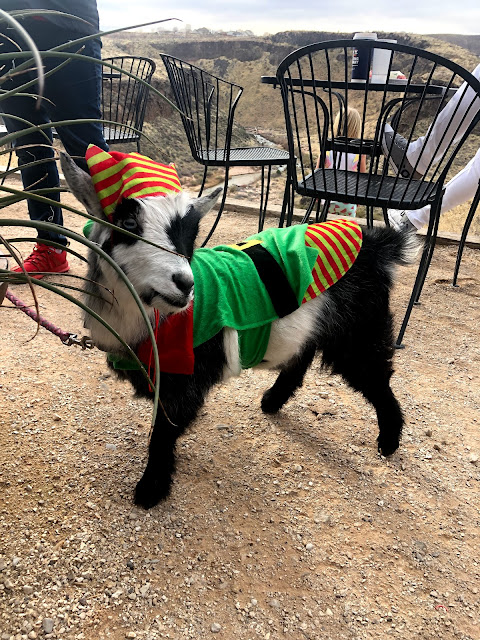 I always have to stop for some local coffee when we're out, so we made our way to nearby Hurricane to go to River Rock Roasting Company. I got a gingerbread latte and enjoyed a gorgeous view of the mountains and Virgin River. There was also a goat dressed up as an elf that was causing some mischief- jumping on the tables and eating the plants!


What's your favorite National Park?
What are you thinking about to stay positive lately?
national parks travel