Where to Run in Pittsburgh


I know that it's only Tuesday, but it's already been a long week.  I can't believe the weekend is still days away.  I guess we have to power on and hope that the rest of the days fly by!

On a more positive note, I have a fun post today and I'm linking up with Tuesdays on the Run!  We'll be talking about running routes, so I'm really excited to see the other posts!  I'll be talking about a few different neighborhoods in the city today.  These are some of the more popular areas to stay in if you're visiting the city.   I thought it would be helpful to share routes as well as a fun place to refuel after your run.  Enjoy! 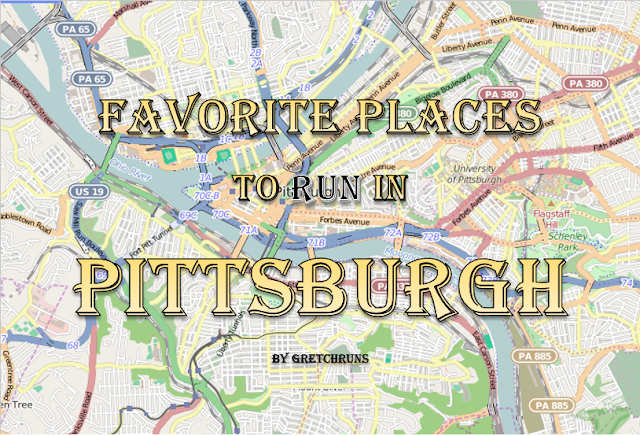 Where to run: River Trails
There are three rivers that run through Pittsburgh, with miles of running and biking trails that follow.  The most popular section is from Heinz Field to PNC Park on the Northshore where you can get stunning views of the skyline.  There are tons of bridges that connect the trails, which you can explore here.

Where to refuel: Simpatico Espresso- 425 Sixth Avenue
This little coffee shop is located in the lobby of an old building (a little confusing at first, but go in the big grey building across the street from Mellon Square).  They serve amazing coffee drinks, as well as amazing smoothies and fitness shakes.  The downside is that, like most places downtown that aren't Starbucks or Dunkin Donuts, it's only open Monday through Friday from 6:30-4.

Where to run:  Pitt's campus and Schenley Park
﻿﻿Oakland is a very runner-friendly area, with Pitt's campus to run around.  The only downside is stopping at pretty much every street, so I suggest renting a bike and riding over (or just running over) to Schenley for a better run.  You'll find trails as well as a large oval with a track.

Where to refuel: The Porch- 221 Schenley Drive
I absolutely love eating dinner at the Porch, almost as much as I love the setting.  It's at the beautiful Schenley Plaza, which is just steps from the Carnegie Library, Cathedral of Learning, Phipps Conservatory and tons of museums.  They also offer breakfast and a brunch that sounds amazing.


Where to run: Grandview Ave
The views from Mt Washington are definitely the best in all of Pittsburgh.  Any picture that you see of the city and the rivers are undoubtedly from the overlooks that line the main road.  Grandview (appropriately named) is a great place to run and catch beautiful views of the city.  There is also a major hill that goes up the mountain that is perfect for hill repeats.  You can also take the incline down to Station Square and get on the river trail for a flatter course.

Where to refuel: Micro Diner- 221 Shiloh St
To be honest, I haven't eaten very many times up at Mt Washington!  Micro Diner has great reviews and sounds terrific- plus they offer an early bird special ($4.99 breakfast until 9AM during the week!)  If you happen to be in Station Square, there are a ton of places to eat and drink there.  I would recommend stopping in Crazy Mocha for the best caramel latte, or Grand Concourse for an incredible Sunday brunch.

Where to run: North Park
Although this isn't in the city of Pittsburgh, the northern suburbs are very popular.  Tons of runners flock to North Park to run around the rolling 5 mile loop around the lake, as well as explore the miles and miles of trails.  I've been running here for years and will never stop!  There are also nearly-weekly races held here if you're interested in a little competition while you're visiting.

Where to refuel: Over the Bar Bicycle Cafe- 10301 Pearce Mill Road
This little cafe is inside of the boat house at North Park (above) with another location in the South Side.  It's always completely packed and has a great breakfast menu.  I also recommend checking out Go Ape if you want to test out a fun ropes course with zip lining!


What are some of your favorite places to run?
Do you run the same course all the time or mix it up?
Pittsburghers- where should I go for my next run?!
courses maps pittsburgh tuesdays