Two Months in the Garden

June 27, 2020
It's already been a month since my first garden update, and there are lots of changes going on! I think most of the hard work is done for now, and we can just wait to start literally reaping what we sowed. Here's how the garden's looking and some updates we've made: 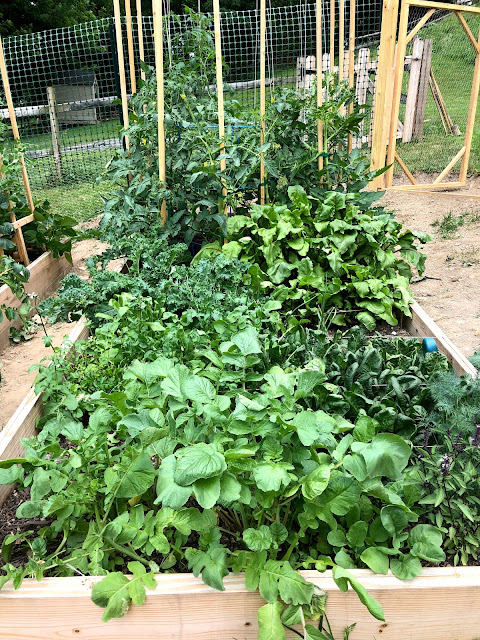 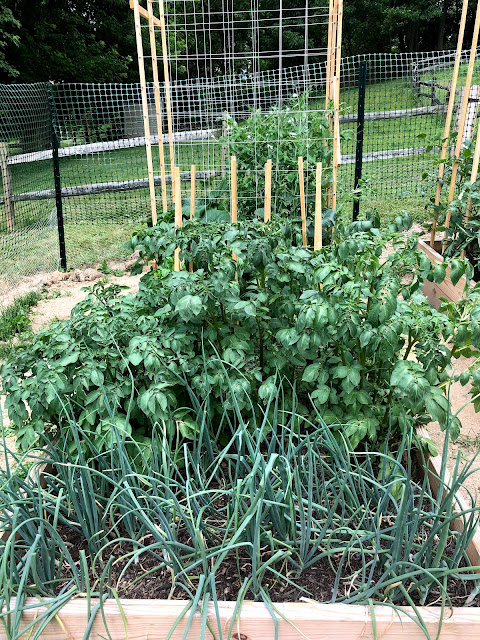 Box 2 also from back to front - beans, peas, cucumber, zucchini, peppers, carrots, chives, potatoes, onion.
We added a fence all around our plants- leaving plenty of room around to prune and water and allow for expansion. The bottom is chicken wire, buried about 2 feet under ground, and plastic fencing on top! For the gate, Dan built a simple frame, stapled on the chicken wire, and then added hinges and a latch. 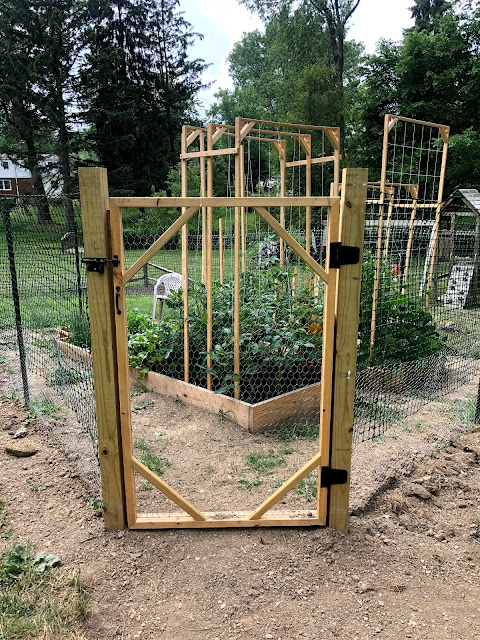 Our next enhancement was adding a hose stand with a spigot. Before, the hose was just sitting out and I would have to haul it over to the garden. Now, it's buried a bit underground and runs right inside of the fence! So much more convenient and was a really simple project. We got this hose stand, which we found on a variety of websites. 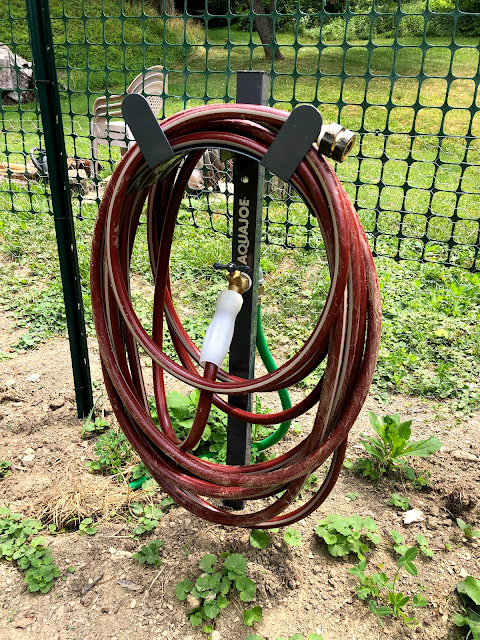 I've also been monitoring the soil with a 3-in-1 reader (moisture, sunlight, and pH level), and anytime it gets to be too dry I'll give a heavy soak to all of the plants (especially my tomatoes, zucchini, and peppers!). One thing to note- make sure if you're feeling the soil for moisture you are going down about 2 knuckles- the top layer is almost always dry, but you want the soil to be moist a few inches below the surface. 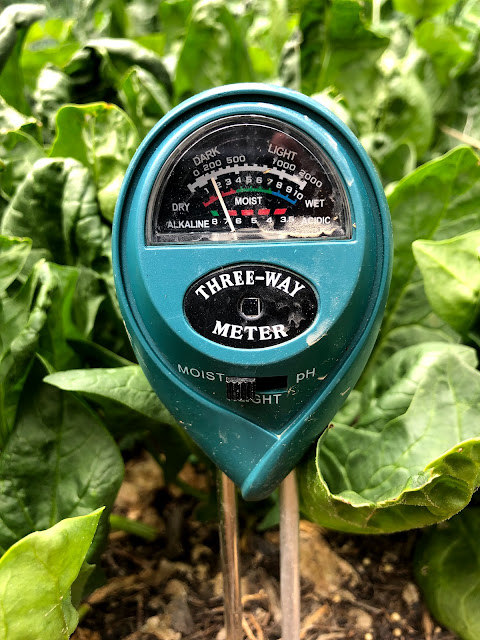 The last change was adding a deck box to house all of our garden tools. I found a small one on Wayfair and it's really handy- I like having everything right there and use the top to lay out my harvest! Right in the box are my pruners, fertilizer (which I'm adding to plants as soon as they start to flower), gloves, string for tying my taller plants to stakes, and other fun maintenance stuff. 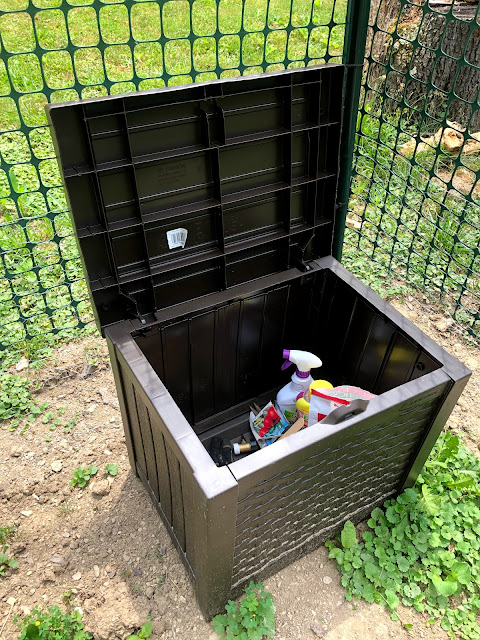 Now on to the fun things- the plants! Everything seems to have shot up in the last month. So far, we've been able to harvest mostly greens - spinach, arugula, kale - and herbs. I've also been pulling up radishes (some of which look amazing, and others not so much. I've learned that I need to spread out my plants much better otherwise they'll just keep growing down instead of a pretty bulb!), and cutting up scallions. 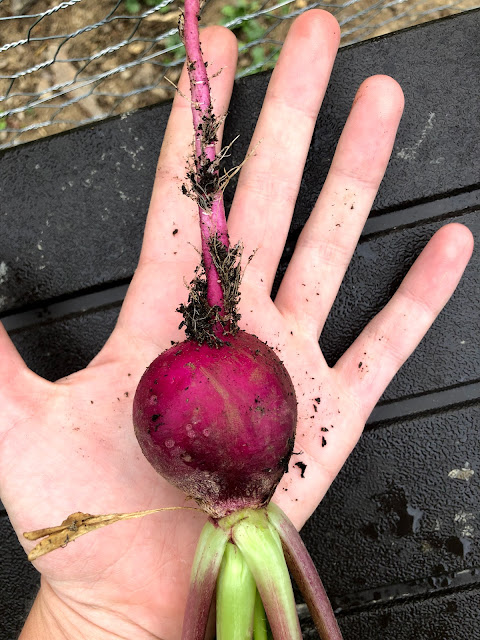 Coming up now are the tomatoes- pretty much every variety that we have is starting to fruit and we have a ton of healthy looking green tomatoes all over the place. I can't wait to start eating these! This week we also got some baby peppers coming in, and our first squash blossom with a baby zucchini growing out of it. We also have some healthy looking peas, beans, and cucumbers- but no fruits (yet). Our other root veggies (beets and carrots) seem to be growing, but it's hard to tell yet- same with the potatoes and onions which are almost taller than me. 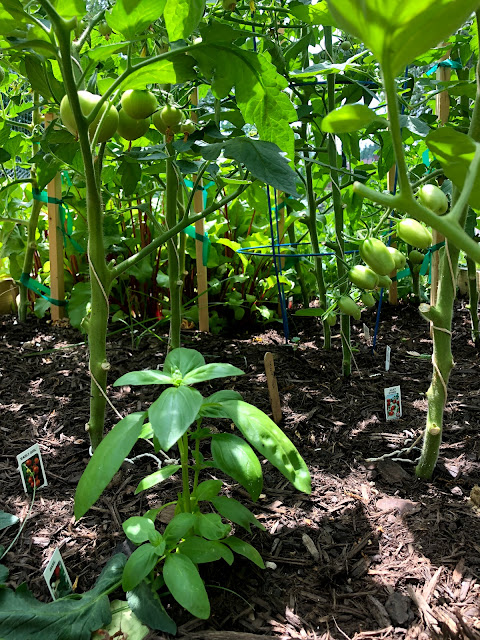 Hopefully next month I'll be able to share better harvests and some recipes that I'm trying out! Let me know how your garden's doing or any tips that you can share with me.
garden