Fireworks and All Nighters

July 05, 2020
Good morning everyone! I hope you all had a good weekend. This was definitely a different Fourth of July than ones I've had in the past- I didn't really celebrate or do anything with friends like I would typically do. Since the holiday fell on the weekend I also didn't have any days off work (fun fact- Friday was not a bank holiday even though most places used that as the holiday!).
To be honest, this wasn't the best week- I'll go into it a bit below. Sleep has been hard to come by, and after a few days it really seems to affect me! I hope that this coming week will be a bit better..we'll see. Here's a look at my week in workouts-

45 min 80s Fun Walk with Rebecca
I know it'll be a long and stressful week at work (new projects and structure- fun!) so I made sure to start off with a little movement. Took out Selma for a nice, long walk and loved this fun playlist. It was all songs by females which was a fun twist!
20 min Arms and Shoulders Strength with Jess Sims
The Peloton app just added a "Weekly Training Plan" collection, with 30 minutes of exercises six days a week. Day one was for upper body, and this was actually a class I took before. It's SO hard but I'm excited to get some strength back in my life. 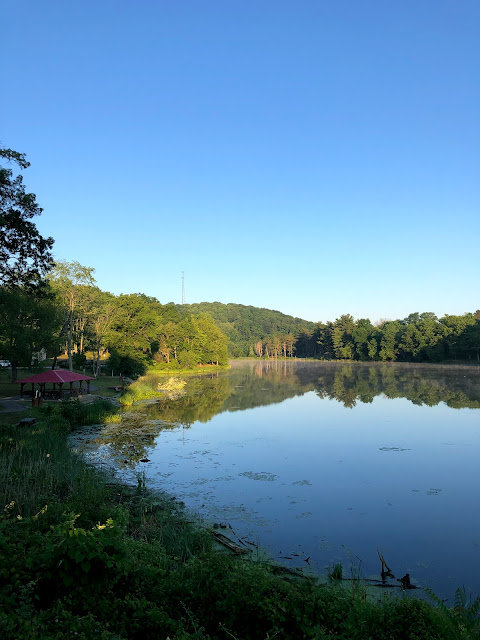 Listened to a podcast as I did an easy lake loop. It was a gorgeous morning and it definitely heated up during the day so I'm glad I got it done early!
20 min Legs and Glutes with Selena
OOF this was really hard. There were only 3 moves that we went through twice, but it was intense. I'll be feeling it for a while. Day two of the training plan done...
30 min Jess King Experience Ride
I had to get in some last miles to hit my 100 mile goal for the month of June, so it was perfect timing to take my first Jess King ride and have it be on a live broadcast of her "show" that used to happen weekly before Coronavirus. Jess is like a disco ball in human form- so energetic and a little bit out there (in a great way). I loved this but wasn't the biggest fan of the music- it's much more EDM and club music than what I typically go for. 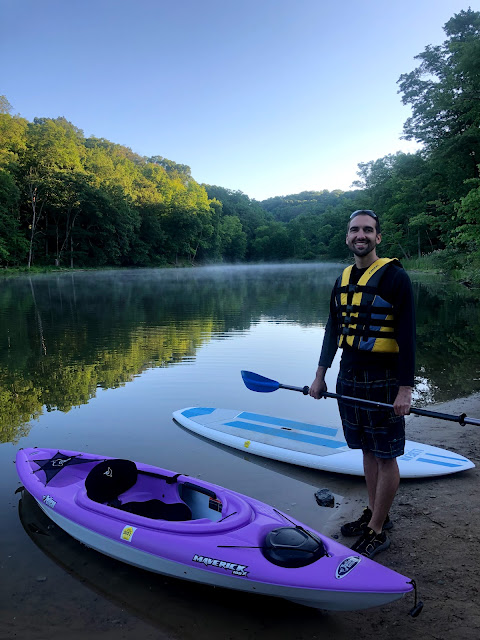 Headed out to the lake early with Dan! He kayaked while I paddleboarded- it's such a great workout but super fun. My legs were pretty sore and shaky from yesterday's strength, so this was a nice easy way to start the day.
30 min Whitney Houston Yoga Flow with Ross
The next artist that was featured by Peloton is one of my favorites of all time- WHITNEY. I was so excited that I had to take three classes back-to-back-to-back. No chill. This yoga was really fun- it was actually 45 minutes but in order to make the ride I could only do the first 30. It was a lot of dancing and just enjoying the music, with some nice stretches towards the end.
30 min Whitney Houston Ride with Ally
This ride was SO much fun, and I loved the songs that Ally chose. She also talked about some of Whitney's history and awards (so many awards!). The time just seemed to fly by and I couldn't believe when class was over.
10 min Whitney Houston Arms Toning with Ally
On the other hand...this seemed to never end! Doing arms on the bike just seems so much harder because the instructors usually have you doing moves constantly for the entire 10 minutes without ever dropping. I definitely dropped a lot and was STRUGGLING through this.

30 min Madonna Fun Run with Matty
I really struggled to get up for this run- when I get stressed, I get pretty bad night terrors and end up waking up multiple times during the night. It was particularly bad last night, so I really did not want to wake up, but I ended up just going and taking it easy. I was definitely slogging through this, but I never regret going for a run.
45 min All For One Ride (plus 10 min warmup and cooldown)
Once a year, Peloton releases workouts featuring all of their instructors (each teaching one song) in each of the disciplines- Bike, Tread, Strength, Yoga. Half of the spin instructors were on this ride - Erik, Alex, Jenn, Kendall, Ben, Hannah, Olivia, Jess King, Robin, and Denis (the other half will be on the "All for One More ride...I'll do it eventually!) It was a great mix of styles and songs, and featured a lot of instructors that I haven't had a chance to ride with before. This was my longest ride on the bike and it surprisingly went by a lot quicker than I expected.

5.5 mile Trail Run
I joined the North Park Trail Runners again for a fun run- they stuck to the red dot, white, and blue dot trails for a patriotic twist. The best part of running with this group is that everyone kind of runs their own pace and does their own thing, so you have plenty of spacing between. The group was on the larger side, around 20 people, so to stay cautious while cases are back on the rise I think I might skip for the next few weeks unfortunately! But- today's run was good.
30 min All For One Yoga Flow

My second All For One workout- this one featuring all of the yoga instructors (Chelsea, Aditi, Denis, Kristin, Anna, and Ross). I wasn't as big fan of the format for yoga- the different energy and going between instructors in the middle of a move kind of threw me off. But- it was still a nice practice and I actually got in crow position for about 2 seconds! 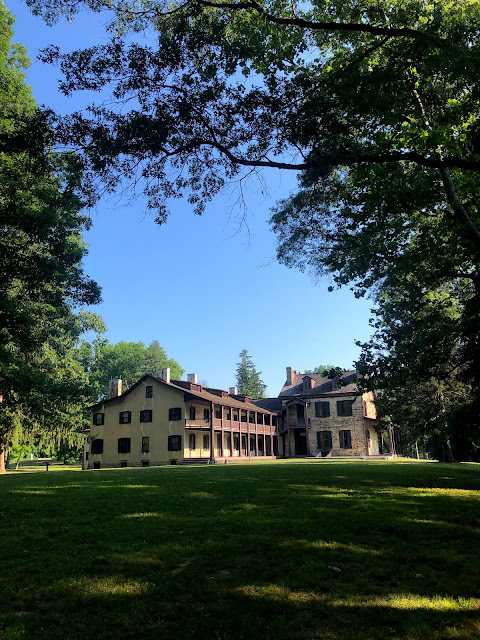 In the spirit of my monthly goal of taking a daytrip hike, Dan and I took Selma to Friendship Hill National Historic Site. The park isn't too far away from us- about an hour and a half- but it was in an area I've never visited and was so gorgeous. 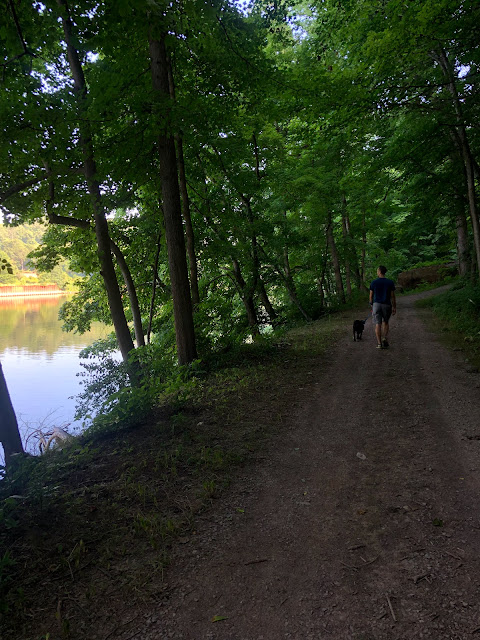 The site features the historic home of Albert Gallatin, who was a politician from Geneva who settled in Pennsylvania and was the longest running Secretary of the Treasury (among other professions and political positions). There are also 10 miles of trails, and we took the main loop around the property and followed along the Monongahela River. It was a really nice trail and pretty much completely empty which was nice! 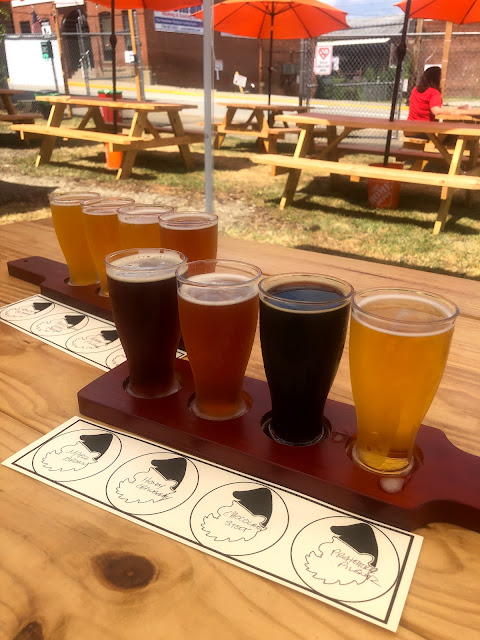 Afterwards, we stopped on the way home at Sobel's Obscure Brewery pop up, which was awesome!! There were picnic tables and canopies set up beside the tap room, so we had plenty of space (even though when we went there was only one other group that stayed and lots of people buying six packs and leaving). The beers were great too (we got two flights so we could try every single beer) and the owner was very nice, so if you're ever in Jennette or see their beers I recommend trying them!
20 min 70s Ride with Denis
Quick little spin to shake out my legs a bit- this class featured some great songs and was fun all around. It was my first full class with Denis and I really liked his energy. 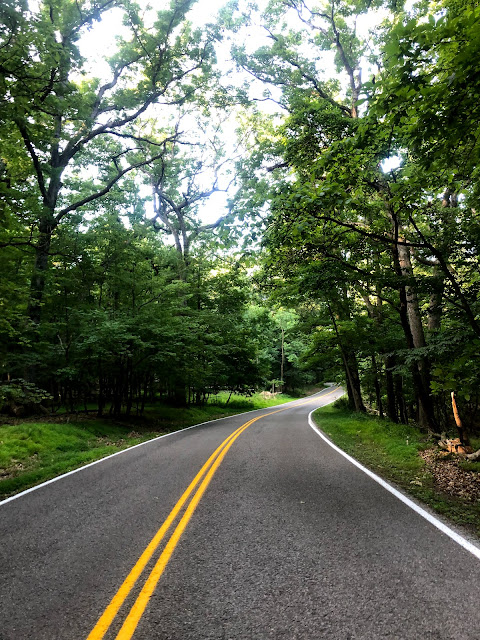 I had another bad night of sleep (mostly due to fireworks) so it was another day of forcing myself up early to go running. The high for the day was 95, so I knew if I didn't run in the morning I wouldn't go at all. Since my body was not cooperating, I decided to make this a run/walk at the beginning, and did a 45 min Country Fun Run with Matt Wilpers on the Peloton app. It was perfect- his plan for the run was run 1 song, walk 1 song, run 2 songs, walk 1, run 3, walk 1, run 1, walk 1. After that I ran until I hit 7 miles, and it was the perfect effort that I needed that day. When I got home, I did a 10 minute stretch that felt really great.
training