Good morning everyone and welcome to Week Five of Great British Bake Off- Pastry Week! I'm sad to say that this is the halfway point of the competition and my technical bakes are just about over. I'm thinking about going back through older seasons to try out even more, but first I have to make it through the finale! 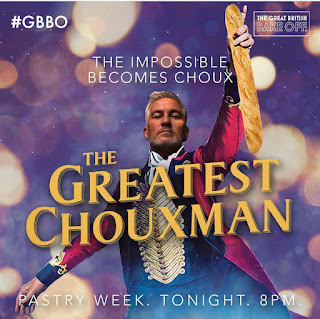 Pastry week seems to be notoriously hard for the bakers with really tough challenges, so I went into this week a little nervous (and really excited!) to see what I got to bake. Before that though, the bakers had a Signature Challenge to make 8 Pasties, which is Cornwell's national dish, and a Showstopper challenge of a caged tart. There were some really beautiful designs- particularly Hermine's. Looked so incredible and I think she deserved Star Baker.

For the Technical Challenge, we got to make Eclairs. In the challenge the bakers made Raspberry and Salted Caramel, but I made Mocha. Usually the recipes are posted on the GBBO website, but this week wasn't up, so I went back in the archives and found that they posted a recipe for Mocha Eclairs and just used that instead.

This recipe had a few different steps- the filling (creme patissiere), the bun (pate choux), and the icing. I started with the filling, which was basically making a custard and chilling it. This was my first time making one, which was really exciting to me because this is a filling they seem to make ALL THE TIME on the show! It was actually a lot easier than I expected it to be, and it turned out being thick, silky, and delicious.
Next up while that chilled was the pastry bun! This is another classic recipe on the show and can be used for so many pastries- profiteroles, eclairs, crullers, beignets, and more. This was another fun and surprisingly simple recipe to make- I melted down butter and water, and mixed in flour to make the dough base. After it cooled, I added eggs to make it a thinner consistency and was done!
After my components were ready, it was time to bake. I added the dough to my piping bag and started piping out my eclairs. I quickly figured out that the biggest piping tip I have is way too small, so I decided to ditch it and just use my bag with no tip. It still seemed like this was too small, so if I make this again I'll have to figure something else out. But- for the challenge I carried on.
During the bake, the high moisture content creates steam and helps the pastry puff up. When baking was almost over, I poked holes in the ends to help dry out the middle, and they ended up being cooked pretty well! I also made the icing quickly while they were cooking, which was as easy and mixing all the ingredients together (cocoa powder, coffee, powdered sugar, water).
After the eclairs cooled down, it was time to stuff them with the pastry cream, which stayed nice and thick. I was able to pipe them pretty decently, and could tell it went all the way through the pastry! Next up was adding my icing, which I decided to do with a spoon. This ended up being really messy and dripping over the sides- not sure if I made it too thin or just added too much? But- once this was on I completed the challenge!

Overall, I think I would have been towards the top of the ranking since everything was technically correct, but would have been docked for the dripping topping. I really want to try this recipe again with different fillings and toppings- it was really fun to make and was a great weekend breakfast item!  Next week is JAPANESE WEEK which I'm SO excited about, so hopefully that will be my first (self-appointed) Star Baker!
GBBO