A Week of Highlights

August 30, 2021
I wanted to try a little something new today that I saw on another blog - showing highlights from a week in my life! Last week was one of my more fun and exciting weeks, so I thought it was the perfect one to show. I'll be sharing a little of what I did each day along with what I wore! 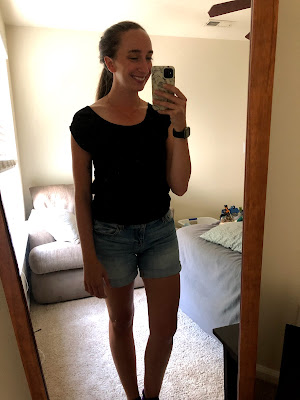 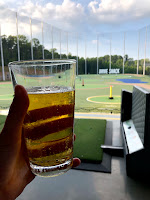 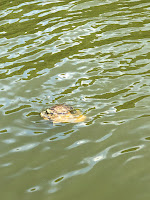 Plans for the day (outside of work): Met up with some friends to go to Drive Shack (similar to Top Golf if you've tried that). Basically it's a driving range but with different interactive games you can play by hitting your ball towards different targets.

One thing that went unexpected: I went for a solo walk after work (sometimes you just need a little alone time) and saw a ton of turtles swimming together- including one that was swimming on top of his mom or dad!

Best part of the day: Spending time with new friends we made here and meeting one of their brothers who was in town visiting.

Best thing I ate: Dan made a stir fry with soba noodles for lunch- we're overdue for a grocery shopping trip so it was nice to have something hearty and delicious. 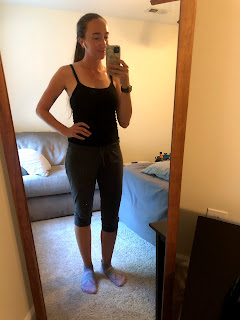 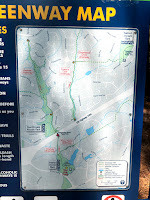 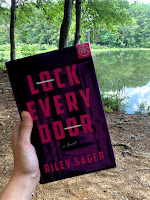 Plans for the day (outside of work): At lunchtime I went for a bike ride on a different greenway- my plan was to start at one park and bike down to another and stop along the way to do my weekly paint n' picnic.

One thing that went unexpected: After work I headed over to the park to read for a bit by the lake. Right after I got settled in it started to rain- I was protected thanks to the trees but it was so beautiful and peaceful to see and hear the rain hitting the water.

Best part of the day: Started watching Nine Perfect Strangers with Dan! I feel like I've been so busy lately and haven't had time to just relax so this was really nice and needed. Plus- I read the book that the show is based on years ago so I was really excited to watch!

Best thing I ate: For dinner I made a mishmash of stuff - a quesadilla with some dipping sauces, pickled peppers and olives, and some pistachios. Very random dinner but I love snacking for meals! 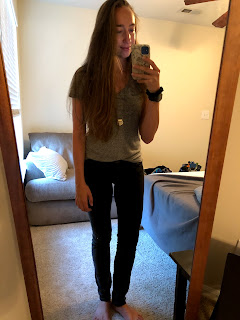 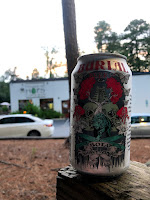 Plans for the day (outside of work): Weekly run club. Not too many people showed up so I just got to hang out with a few new people and run with my friend Char!

One thing that went unexpected: It was POURING when I left for run club (which might be why attendance was lower than usual) and was super humid on the run! My body was definitely not ready for that so it was a rough run.

Best part of the day: My entire work day was packed full of meetings, but I had a quick break in the middle of the day and got to run an errand I've been putting off- mailing back our PA license plates. Feels good to cross off items that have been sitting on your list for a while.

What I wore: Black American Eagle jeans, gray Target top, Madewell marble necklace (I'm starting to see a trend that all of my clothes are black and gray...)

Best thing I ate: I was super hungry after run club and didn't feel like cooking so I stopped at Bojangles for some "fixin's" (aka sides) and it really hit the spot. 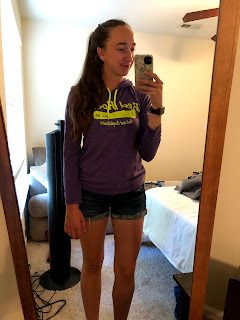 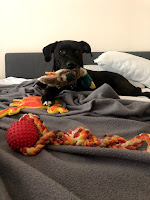 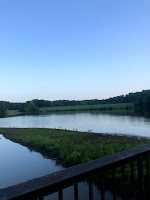 Plans for the day (outside of work): It was National Dog Day, so we met up with friends and their dog at a local ice cream shop for some dog sundaes (for the dogs) and ice cream (for the humans).

One thing that went unexpected: We stopped by a lake after ice cream for a little walk, and there were a few police on horses there! Not something you see everyday!

Best part of the day: My ice cream (and the conversation) were great! I had frozen hot chocolate that had little bits of marshmallow in it, and it was really delicious.

Best thing I ate: Besides the ice cream..I made a deviled egg pasta salad that was great and I pretty much snacked on it all day. 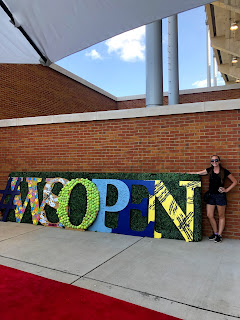 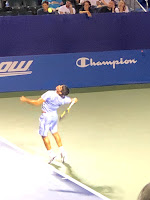 Plans for the day (outside of work): I only had a half day of work today because we headed to Winston Salem to watch the tennis tournament being held at Wake Forest. We got to see the mens' double finals as well as both single semifinal matches.

One thing that went unexpected: We were originally planning on going to the tournament with a friend who wasn't able to make it, but it was nice to just go with Dan and spend the day with him.

Best part of the day: Before the matches we went to two breweries - Incendiary and Wise Man. I've had a bunch of Wise Man's beers since moving down here so it was great to go to the actual brewery and I got to try a pumpkin cold brew beer!

What I wore: Athleta shorts (just recently got these and they are the most comfortable shorts ever), Old Navy black top.

Best thing I ate: Incendiary is next to a pizza place where we got an amazing funghi pizza. If something has "truffle oil" listed in the ingredients I WILL order it.