October 27, 2015
Today for Tuesdays on the Run I'm going to be recapping the race that I did this weekend- the Pittsburgh 10 Miler!  This has quickly become one of my favorite races of the year, and I've run it every year since it started in 2013.  The course follows most of the Pittsburgh Marathon- but in reverse.  It's a pretty flat course (at least by Pittsburgh standards) and crosses four bridges.

Let's take a look at how the race went for me, broken into two parts.  I always find it easier to divide longer races into smaller chunks to focus on, so I thought of this race as two five-mile runs.  Here we go!

The race starts in Station Square, and runs down Carson Street to the West End. I started out with the 9:00 pace group, and wanted to see how I felt for the first 5 miles, then decide if I wanted to stick with them or go ahead at that point.  We encountered our first hill in the West End right after mile 1, which is short and steep, then crossed the West End Bridge for another small hill followed by a long downhill.

After crossing the bridge, we ran up a small hill on the North Side to get up to Western Ave and the Humane Society.  Unfortunately, there were no dogs outside, but I love running through CCAC's campus and seeing the historic buildings on Ridge Ave.  I was still feeling great at this point and had no problems staying with the 9:00 pacers. 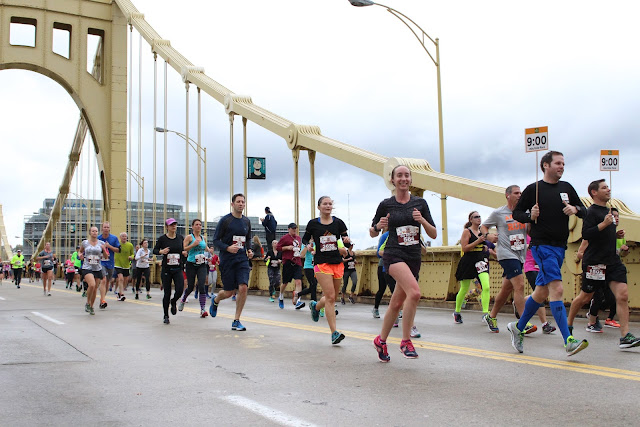 Right after mile 4 was a water stop, where I decided to take a salt stick tab.  I was feeling really warm and overdressed, so I drank a bit of water and kept moving.  I think I was still feeling the effects of being sick last week, but luckily I felt great otherwise.  Note to self- next time a race starts at 55 degrees wear short sleeves.  The relay exchange was also right around this point, and I saw Steffany right after she finished!  Her team (along with Kristy) ended up getting 4th place in the relay, beating all the male teams.  Go girls!!

I was still feeling really good at this point!  The pacers were running slightly faster than 9:00 miles, so I stayed with them.  I also finished listening to Wait, Wait Don't Tell Me and switched over to music.  Dan (who took the picture above) and my parents were waiting on the Andy Warhol Bridge, which provided another short uphill and downhill.  After crossing that bridge, we turned to go right back over the Allegheny River on the Rachel Carson Bridge.  Around this point, I ditched the pacers and spotted Jennifer with the adorable Django and crossed the fourth and final bridge.  Luckily, the 16th Street Bridge is relatively flat and has a nice downhill into the Strip District. 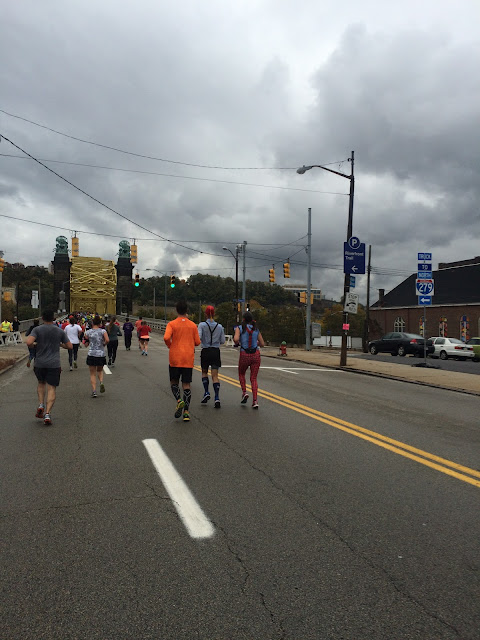 Running in the Strip District is one of my favorite and least favorite things.  On the positive side- it's a great street with lots of spectators and fun buildings to look at.  On the negative- there are so many different foods being cooked that would normally smell amazing, but make me feel nauseous when I'm running!  I still felt relatively good at this point, so my plan was to take it easy until I got to mile 8, then pick it up until the finish.  I also tried to take another salt tab since I still felt warm and was sweating more than usual, but it would not go down at all.  I decided to throw it out and just have a sip of water, which luckily didn't come back to hurt me! 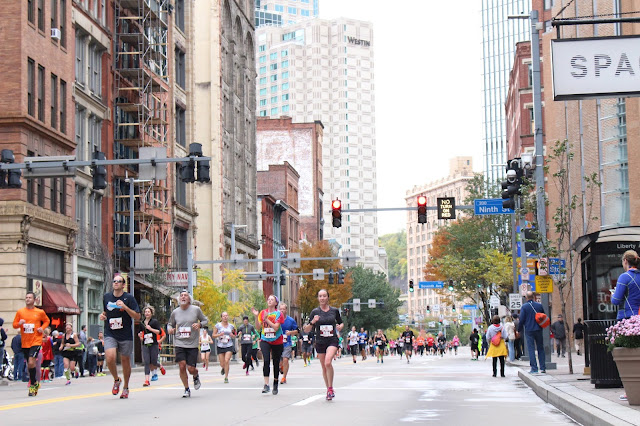 The final mile was extremely tough for me!  You are running down Liberty Avenue, which is a very long, straight road.  I could see the buildings downtown and knew which one was the finish line- but they never seemed to get any closer!  Once we were out of the Strip District and entering the downtown area, we turned a corner and I could see the finish line ahead.  At the same time, it felt like I ran into a wall of wind - it was so intense!  I tried to pump my arms harder to help out, but it felt like it took forever to get there. 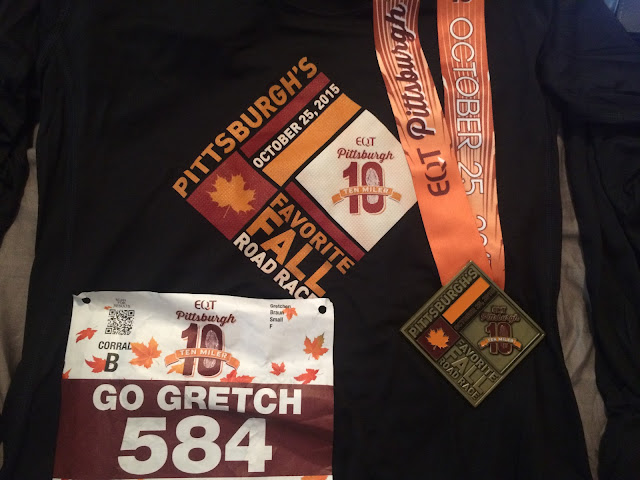 The shirt, medal and bib all had the same fall theme.  I loved it!  The shirt from last year is my favorite, and I love this one just as much.  I like having race shirts in basic colors, so this black one with a discrete logo is right up my alley! 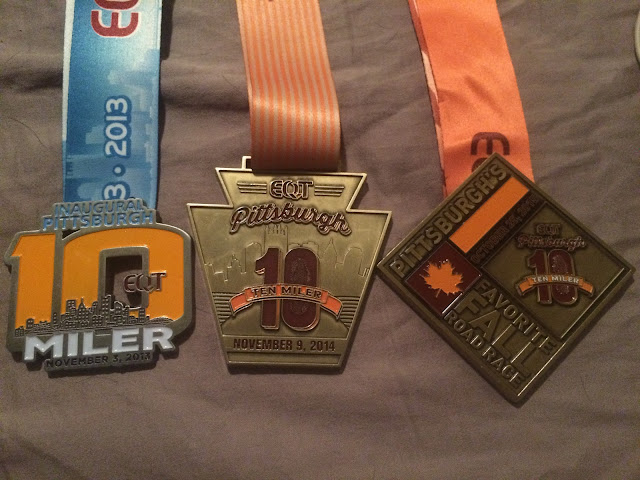 Overall, I was thrilled with the race!  I didn't have any goals or expectations coming in, so I was really happy to get a PR and feel strong the entire time.  I do regret starting with the 9:00 group, and felt that I could have stuck with 8:30 with no problem.  I love doing the 10 Miler every year and hope to keep running it in the future.

What's your favorite local race?
Do you usually run with pace groups?
Have you ever dressed up for a race?  Tons of people were dressed up, including the Doctor Who team in the picture above!

linking up with Jill for Fitness Friday
races