Great British Bake Off Wrap Up

Hi everyone! Today I have a delicious post to share- a wrap up and final thoughts on my experience baking all of the technical bakes from this season of Great British Bake Off. I finished the final two bakes last week, and it's been such a fun challenge for me! I learned so much during this little experiment and I'm a little sad that it's over. Maybe I'll start over with a new season, or just wait for the next one to start!

Since I'm a little behind on sharing the bakes, I'll summarize the past few first, then go into my wrap up.

The technical challenge for this week was to make Sussex Pond Puddings, which are basically whole lemons and butter wrapped up in suet pastry and steamed to cook. I decided to forego this for a few reasons- everyone online said that it was disgusting and I didn't want to waste food, and I wasn't able to track down suet. Plus, I don't have any steaming equipment! Instead of making this, I went for the Signature Challenge, which was miniature cheesecakes. Fun fact- cheesecake is one of my favorite desserts but I've never actually made one before, so I was REALLY excited for this one! 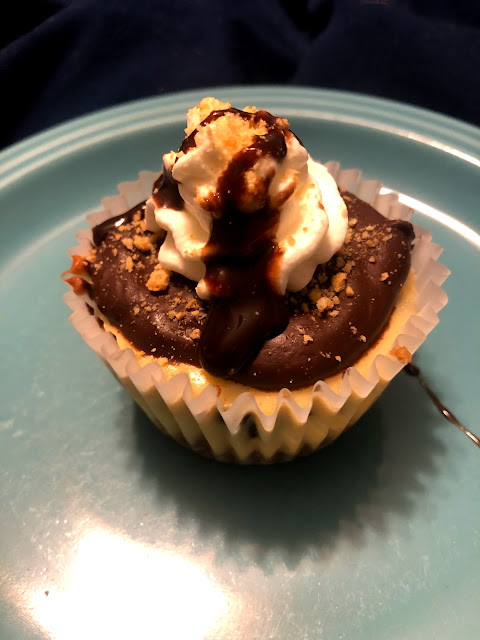 I decided to go for a chocolate chip cheesecake with chocolate ganache on top, and oh my gosh these were so good. I'm really happy I switched over to these and absolutely devoured them!

To be honest, I put off this bake for a really long time because it seemed super intimidating. We had to make Danish Cornucopia Cake, which is basically a horn made of little almond cookies, fixed together with caramel, decorated with icing and topped with chocolate scrolls. The cookies themselves actually turned out really well and were surprisingly delicious! I also successfully tempered chocolate and had lots of cute little scrolls to use. 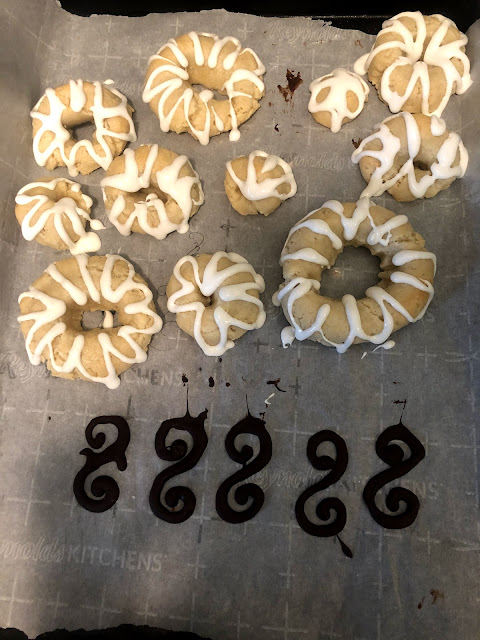 The good parts ended there...I wasn't able to make caramel (it kept crystalizing so I obviously have the technique wrong!) and my icing was way too wet and kept smudging. I was left with messy cookies and chocolate that looked like a scene from "Nailed It"- but luckily Dan thought it was amazing and ate the whole thing in a day.

What I was supposed to make... 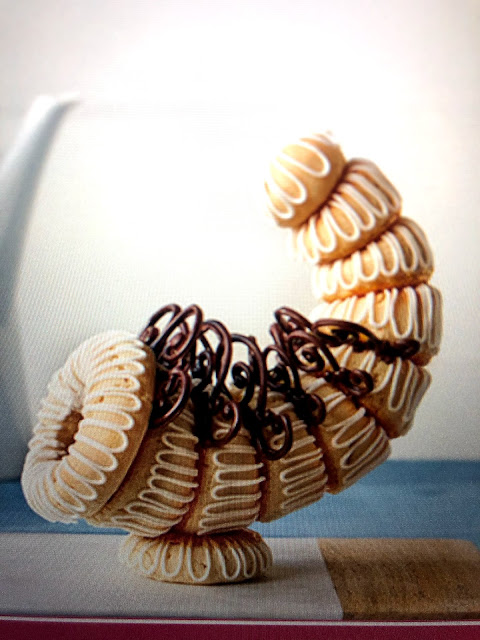 And what I made..nailed it! 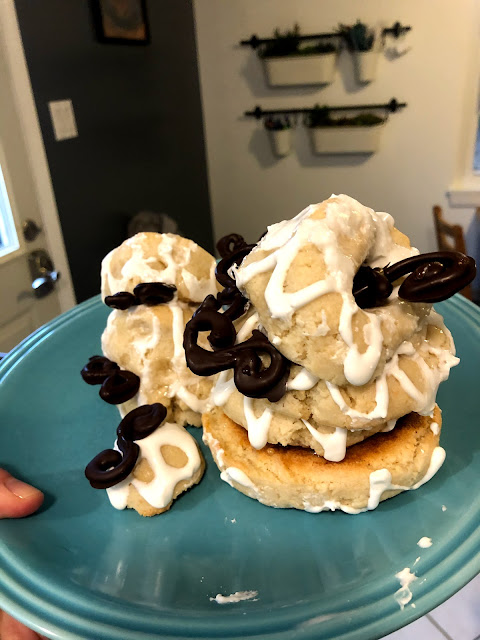 After seeing this challenge, I thought it would be another disaster for me with all of the components. The final Technical was called a walnut whirl- a cone of chocolate with marshmallow inside, circling a coffee chocolate ganache, a biscuit base, and topped with walnuts. There were so many things I had to do, including making marshmallow for the first time! This was a really time-consuming bake, but was SO much fun. I ended up with an adorable treat that was super delicious. There were so many different textures- a crispy chocolate exterior with a crumbly, nutty base, soft marshmallow and a delectable and creamy center. It was so, SO good! Here's a look at what it looked like inside with all of the beautiful layers- 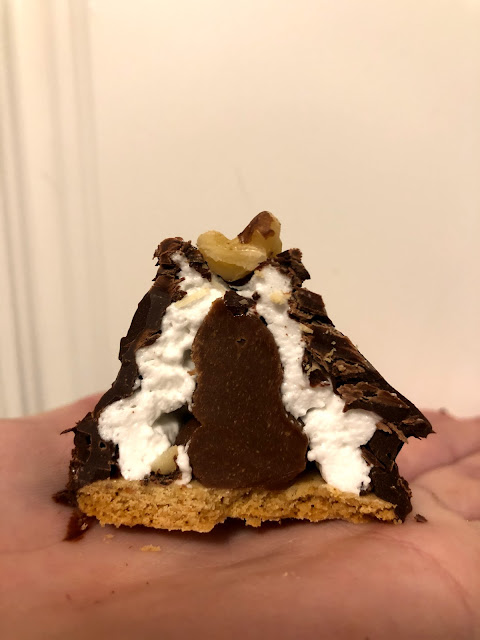 And the outsides..not quite as pretty (or super consistent...oh well) 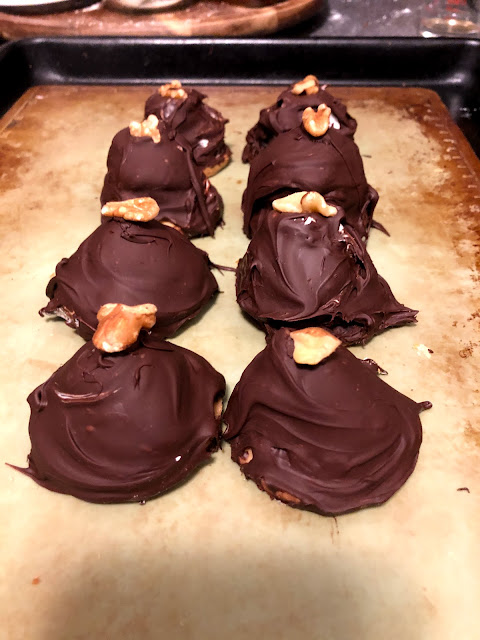 Now that we're all caught up on the bakes, let's get to the final wrap up and awards-

Like I said in my intro, this was such a fun challenge for me. I've always enjoyed baking, but typically stick with easy and typical desserts like cookies and the occasional cake. When quarantine started and I had more time inside, I started to experiment a bit more with more difficult recipes like macarons and really enjoyed it! Then GBBO started up, and I realized that the recipes were shared on their website every week and a new challenge was born.

I think that the degree of difficulty definitely increased each episode, and we almost had building blocks of skills going from week to week. We started out with Pineapple upside down cake, which taught us how to make a proper sponge and a good syrup. Then we moved into Coconut macaroons, which was more about precision and multitasking with different components. Next up was Rainbow bagels for bread week (as you'll see below this was not my favorite) where we learned about rising dough properly. After that was another bread with our Chocolate Babka. This is where I could feel a shift in difficulty, because we had more instructions and a more challenging shape to create.

At this point we were halfway through the season, and I got to make choux pastry and pastry cream for the first time, which always seems like classic recipes in the Bake Off! The Eclairs were a big challenge and the first time I really felt like I got it wrong, but I bounced back the next week with the intricate Matcha crepe cake. After that we made the most amazing donuts, where I got to make another pastry cream and worked on more dough! Luckily I already had those skills from previous challenges!

After that, we had the last three bakes that I mentioned above, that just added on challenge after challenge. I'm sure that the hardest part of all of these is actually getting them done in the time allotted, and following a pared down recipe (the ones given on the GBBO website have full instructions, but the bakers are only given basic steps like "Make the dough" instead of telling you how to make the dough).

Overall, this was so much fun and I'll definitely be doing this again in the future! Now let's get to some "awards" -

This was probably one of the most amazing things that I've ever baked. I've eaten babka before, but it didn't taste half as good as this! Particularly fresh out of the oven, this was layer after layer of rich and sweet dough sandwiched between luscious layers of chocolate, sprinkled with hazelnuts throughout. If you're a fan of Nutella, this is taking that taste to a whole other planet. It's so, so good and was much easier to make than I expected. Can't wait to make this again!

I talked about this above, but it was seriously horrible! Everything else I made at least looked somewhat presentable, but this one would have landed in the bin if I was on the show. The only redeemable quality was that it tasted alright, but I feel like I need to salvage my pride and learn how to actually make caramel. Will not attempt to bake this again though.

Not only did this cake look amazing, but it was just fun to make and eat. It was definitely more finicky to make the cake this way with all the layers, but once you get into the groove of making crepes it's actually pretty easy and fun! Plus, the whipped cream and white chocolate ganache and sliced strawberries were a fun filling to make and stuff in the layers. I think this would be another bake I would try again, but might do a chocolate crepe instead of matcha.

Most Likely to Try Again - Jam and Custard Donuts

Confession time- I made these while Dan was away for work, and I ate them all myself within two or three days. They were SO delicious and were probably the biggest shock to me with how well they turned out (and how much I liked eating them!). I didn't think I was baking them correctly the entire time and also thought I was making the custard completely wrong, but  I could not believe my taste buds when I bit into it for the first time. Even though this is not a donut I would typically order (I'm more of a cream and chocolate gal), it was one of the best that I've ever had. I really want to try this technique with some other flavors as well!

Unfortunately these rainbow bagels were so bland tasting and even though they were cute, were just a waste of time at the end of the day. I've made other bagel recipes before that tasted much better, so I think this one was just a dud! Plus, I think that most other seasons have had more interesting technical challenges for Bread Week, so I was just expecting something a little more interesting.

Did anyone else try any of the Technical Bakes?

What would be your favorite treat?